Is It Over Yet? 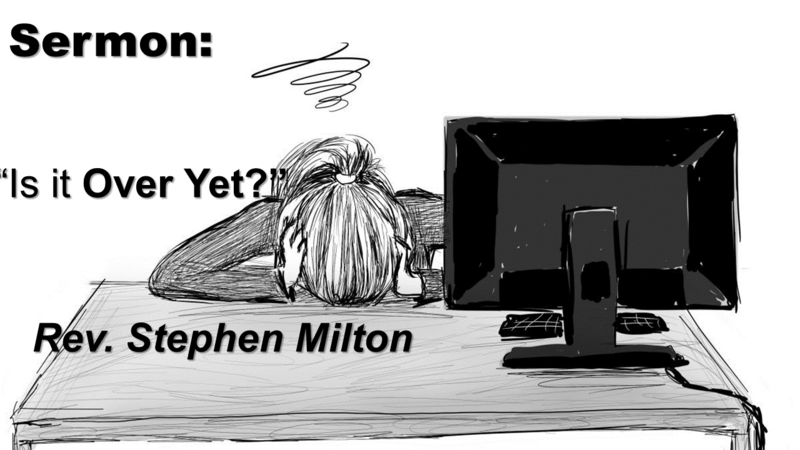 Today’s scripture reading is the first of 150 psalms. The psalms are like the hymnbook of the Hebrew Scriptures. They were sung, and we still sing many of them today. The psalms are beautiful as poetry, and they pack a theological and emotional punch. The psalms always take the side of the underdog. People cry out against wrongs friends and family have perpetrated, as well as complete strangers. And in some psalms, the suffering is causing by governments , Jewish and foreign, who are in the hands of wicked rulers. In some psalms But often, the suffering comes from wicked governments, sometimes Jewish, other times conquering powers. The wicked come in many forms, but the psalms always side with those who suffer but look to God for support.

But the psalms don’t just hold the hands of those who suffer, they also take a position on suffering itself. We are told in this first psalm that the faithful should avoid sinners as much as possible. Don’t walk with those who are corrupt, don’t join them in the seats of power. Steer clear as much as you can. The reason we should keep our distance is that evil ways never prosper, the psalm says. Evil governments and schemers always lose, and are blown away like chaff in the wind.

But is that true? Are the ways of the wicked doomed? Do the wicked always fail in the end?

That question has been on many of our minds in the past two weeks as we watch the results of the American election. The incumbent president has shocked with the world for four years with a torrent of lies and egotistical behaviour. He has been accused of using public office to line his personal pockets, and has openly encouraged others to do the same. I will let you fill in the blanks on how his presidency is an example of an abuse of power and an exercise in narcissistic egotism. But one thing everyone can agree on is that this president believes that power, fame and wealth are the chief goals of life, and certainly of his life. In this respect, the Bible would define him as one of the wicked.

But is it likely that this kind of wicked leader will fail? Will he simply be blown away into the wind, and lose all he has amassed? Many of us may wish that Donald Trump will get his just deserts for all the trouble, pain and death he and his inner circle have caused. But will Trump lose power? Not if he can help it. He has launched numerous lawsuits to challenge his defeat in several states. He has also stacked the Supreme Court with right wing judges who he may hope will help him stay in office.

If these efforts fail, and Trump leaves the White House in January, will he get his comeuppance then? It seems certain that he will spend the next few years in court fighting corruption charges and business problems, including a 400 million dollar debt. But will these troubles cut him down to size, will he learn his lesson? Personally, I doubt it. Although I believe people can change radically, you need to want to change, and I see no evidence of that at present. Trump, like many wealthy, corrupt leaders, may go to his grave convinced he was the greatest, believing the lies of his followers and yes-men. It appears that real life suggests that our psalm is engaging in wishful thinking. The wicked can prosper until the very end, they do not blow away in the wind.

Even the New Testament appears to contradict the first psalm’s argument. In Christ’s day, Galilee was ruled by Herod Antipas. He lived the good life. He had a grand palace on the hill overlooking the Sea of Galilee, and he spent his days surrounded by wealth and sycophants. We know this both from the historical record, and from a particular story told in the gospels.

Herod has a birthday party for himself, and invites his court. During the party, his stepdaughter performs a sexy dance for him. If that sounds creepy, you’re getting the picture. Herod is delighted, so much so that he offers to give the young woman anything she wants, up to half of his kingdom. It is a rash, foolish boast. The dancer’s mother, Herod’s new wife, has a grudge against John the Baptist, who is a prisoner in the dungeon. The girl announces that she wants John’s head brought to her on a platter. Herod is shocked and dismayed. He likes listening to John. But he’s stuck, he has made this promise in front of the entire court, so he cannot back down.

So John is executed, and his bloody head presented as grotesque birthday present.
This episode is meant to illustrate the price that rulers pay when they rule out of greed and self- interest.

Herod throws himself a birthday party, and wants it all to be about him. He has no sense of propriety, allowing his stepdaughter to dance for him. He has little self control, offering to give her half his kingdom because he is so turned on by her dance. His selfishness is reflected in his followers. His wife takes the occasion to further her own cruel interests by having John killed. Selfish rulers attract selfish followers, and those synchophants cannot be trusted to protect the king’s interests.

In the gospel of Mark and Matthew, this story is followed immediately by an example of what a good leader looks like. It is the famous story of Jesus feeding the 5000.

Jesus has come to a deserted place to be with the disciples. He is followed by people eager to hear his wisdom and to be healed. They come to him, he does not need to send out invitations. He spends the day healing and sharing wisdom with them – he does not expect compliments or for them to entertain him. When they get hungry, this wise leader finds a way to feed them. King Herod’s party led to a dead man’s head being presented as food. On the hillside with Jesus, a meal which is life-giving is presented to thousands of people.

In this story, we see the difference between good and bad leaders. One seeks to serve himself, and society rots around him as others follow his selfish example. The good leader on the other hand, lives to serve his people, feeding them spiritually and physically. When leaders spout hatred and encourage it in others, they create an unstable situation. People riled up with hatred turn on each other, and will eventually turn on their leader. For that reason, politicians who incite violence and hatred also promote law and order. They need the police and army to be strong enough to protect them against the unrest they are encouraging. Hatred and fear go together, bringing out the worst in everyone.

But Jesus shows us what happens when leaders share love and compassion. Ordinary people get taken care of - they are given the means to take care of each other. No one is afraid that love will get out of hand, that people will be too caring towards each other. An epidemic of love is not a problem. Love empowers by enabling us to see the perspectives of others more clearly. If you start with love as your premise, you have the patience to sit down with people and hear them out, to understand their needs and point of view. Leaders who promote love don’t worry about their constituents being too grateful or too creative. Love empowers without being destructive. Love results in more fairness and equality. As Cornell West has said, justice is what love looks like in public.

That all sounds great in theory, but don’t good governments get taken over by bad ones? Good leaders by bad ones? Yes they do. Wicked governments throughout history have sought to increase their power by conquering good states. World War Two provided ample evidence of that. Being good is no guarantee of material or political prosperity and longevity.

And that takes us back to the first psalm. When it warns that we should not collaborate with the wicked, it provides an alternative. It speaks of faith, using the image of a tree planted by a stream of life-giving water. The faithful are sustained in all seasons, bearing fruit at all times. The image is drawn from nature, it makes no promises of fine palaces. Like Christ’s feeding of the 5000, it happens outside, in God’s palace.

The Jews of all people knew that bad things happen in this world. But throughout the psalms they promise that those who trust in God’s love can be given a sense of spiritual security which can get you through any trial or tribulation that comes your way. We hear this when people suffer from cancer and other illnesses, they say that their faith has sustained them. The cancer may prevail, but inwardly, they feel fed and loved, even grateful for what little they have. From the outside their suffering looks like a defeat, not success. But as one of my former ministers used to say, all of us face the end in the same way: with a bedside table, a lamp and a bed. That’s the scope of everyone’s material kingdom, rich or poor, when we reach our last days. All the other riches we may have amassed become irrelevant. Having faith in that bed makes all the difference.

It is likely that as long as there are governments, there will be people who are convinced that power, fame and wealth are worth pursuing. The wicked will likely always be with us, and they will grab power from time to time. But they seem unable to hold it. Evil empires usually crumble, victims of their own infighting and inefficiencies. The Third Reich is gone, so is the Soviet Union, and Mao’s Chinese communism. But more power grabbing people will always come along to replace them, and try to build new empires.

Our job, as people of faith, is to look on this not with despair, but simply acknowledge that this is the way of the world. We have been warned in our good book that sin will be with us for a long time. The forecast calls for intermittent clouds for the foreseeable future. But while the greedy battle it out, we are invited to follow God’s way. To be like Jesus, where we share love for others, confident that we are loved enough already. No matter who is in power, we are to help others, as we are helped. So let us spend our days loving each other, being loved, and sharing that love even with strangers. It won’t make us rich, powerful or famous. And that’s fine. Our spiritual prosperity will get us through this life, and into the next. And that’s more than we need.