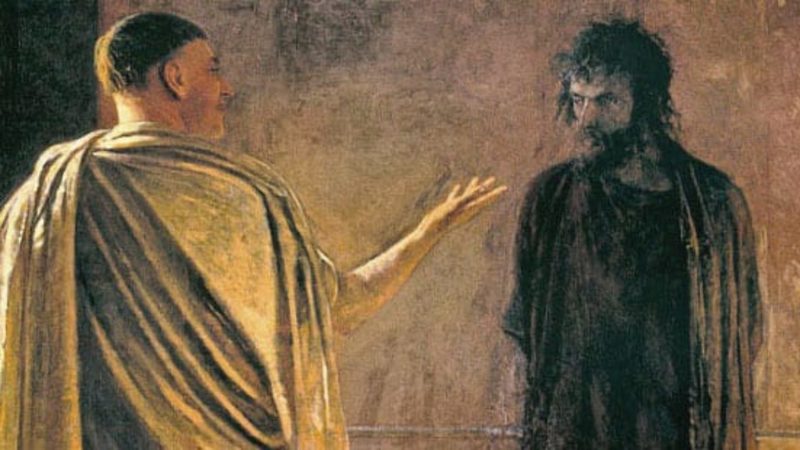 That’s the question Pilate asks of Jesus. It is a scandalous question to come out of the mouth of a leader. It’s meant to stop us in our tracks. In the ancient world, like now, people counted on government leaders to create laws and policies that were based on the truth. How else could bridges be built, wars waged, sewers dug and laws written if leaders had no idea how the world worked? No one needs a leader who doesn’t understand the truth. Yet, here was the Roman governor of Judea, standing in front of Jesus asking , “What is Truth?”

The gospel writer, John, puts these words into Pilate’s mouth to indict the entire world order. The problem with the world, the gospel is saying, is that if God, the ultimate Truth, were to stand face to face with most leaders, they would have no idea who was in front of them. Even the soldiers who come to arrest Jesus can sense His divinity – they fall down to the ground as soon as they see Him. But Pilate hasn’t a clue.

“What is Truth?” That question is no less scandalous and searing now than it was on the day Jesus was sentenced. As the Covid-19 virus has swept around the world, the fate of nations depends on how we respond to the question of “what is truth?” In countries where truth is considered an embarrassing inconvenience, the virus has made fools of their leaders, and victims of their followers. This virus is unmoved by spin and false promises. Facing the truth without flinching has never been more important. We are fortunate to live in a country where our governments have set aside wishful thinking and politics to focus on what is needed.

“What is Truth?” For some, it seems like this virus is a judgement or punishment, sent by God or nature. They say it is the punishment we deserve for living so far out of balance with nature. But if this is the case, why was the burning of Australia not seen as God’s punishment? It certainly looks Biblical enough. Or the death of half of all species in the last two centuries? The God we meet in our Good Friday story has been with the poor and the sick for the last few years, travelling the dusty roads of Galilee. Jesus has spread the good news to the poor, and spent every day healing the sick, the lame, the blind and the deaf. Why would this God send a virus to aggrieve nursing home residents? In the United States and in England, experts have noticed that this virus is hitting the poor and people of colour the hardest, in numbers far higher than their proportion of the population.1 Why would God send a plague to hurt the people who have the least power to make decisions in the world?

1 Black hit harder than they should be by virus in U.S.: https://www.theguardian.com/world/2020/apr/08/its-a- racial-justice-issue-black-americans-are-dying-in-greater-numbers-from-covid-19;

“What is Truth?” God isn’t an assassin; this is no winnowing of sinners. On Good Friday, let us remember that Jesus doesn’t stay to have martinis with Pilate. They do not continue their philosophical discussion about truth. Instead, Jesus gets back to his mission to save the world. He heads, without resistance, to Golgotha, the place of skulls. It is a human garbage pit. The place where human beings, wondrously and fearfully made by God, are treated as mere things. Pinned on crosses near a road for all to see. Each is a warning to anyone who would dare threaten the power of the Roman government. Their mangled bodies are a warning – this is where rebellion leads. Beware.

Yet it is here, on the cross, that Jesus chooses to go. To die on the cross was considered the most shameful death of all. Parents and relatives would simply stop speaking the name of sons who had been crucified. No indignity could be worse. But this is where Jesus chooses to end his life, with nails in his hands and feet. He is surrounded by the stink of death, bones, and jeering crowds. His murderers have stripped the clothes off his back. They gamble to see who will get to steal his last possessions. No insult is too great. This is how those who are blind treat the sacred power of life itself.

“What is Truth?” Pilate had no idea. Many still don’t. But we do. Jesus shows it here. God does not abandon those who suffer. God offers love and comfort. Solidarity and the promise of life eternal. God was pinned to a cross so that everyone on Earth could know that God does not abandon the suffering. God is with every person on a ventilator. God is with every nurse treating the sick. God is with overwhelmed undertakers, and the people digging temporary mass graves. And God will be with you if you get sick, and in your worry now. God chose to suffer, not to stay in comfortable palaces. And for those who ask “what is truth?” the answer is love. And not just on the good days. God suffered because we suffer. We know that God loves us because God chose to be on a cross, and continues to be with us, even in our darkest hours.

And that is a blessing beyond measure. Amen.