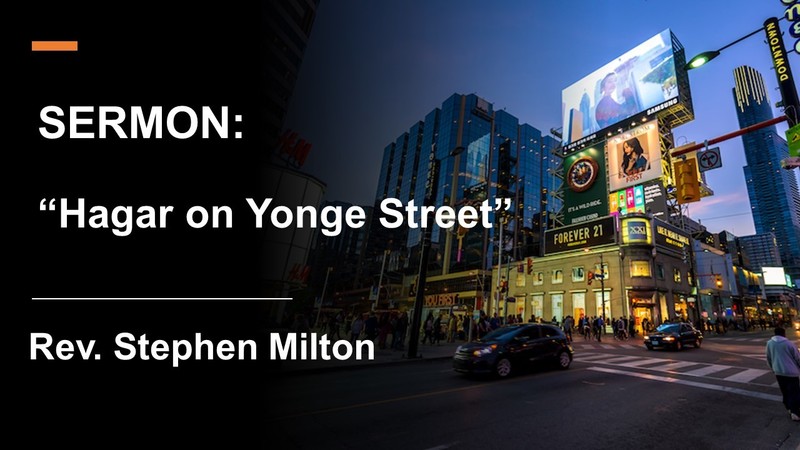 Today’s reading comes from near the beginning of the Old Testament. It is the famous story of
an angel who rescues a distraught woman in the desert. In some ways, it seems like a fairy tale.
Lots of women have found themselves in trouble over the course of history, and no angel has
come to rescue them. So, what relevance can this story have to our world today, convulsed
with protests and a pandemic? In this sermon, I want to show that this story is very relevant to
our times. But to get there, we need some back story on who Hagar was, and how she came to
be kicked out by her master, Abraham.

Abraham started out being called Abram. He’s an old man, and his wife Sarah is old, too. They
are well past the age of having children. Nonetheless, God tells Abram that if he becomes loyal
to God alone , and forsakes all other gods, he will have more descendants than all the stars in
the sky. He will become the father of all Israelites. Abram is a man of wealth. He comes from
the most civilized place on earth, Sumer, in what is now Iraq. He has slaves, servants, cattle and
camels. In his time, it was kings and rich men who were close to god – their wealth proved they
had their God’s approval. So far, this story isn’t very surprising.

But in this case, Abram’s wife, Sarah, gets impatient. She’s been promised a miraculous
pregnancy, but nothing is happening.

So, she decides to do something about it. She tells her husband Abram that he should have sex with Hagar, one of her Egyptian slaves. By law, Sarah will be the mother of the child, and Abram will have an heir. It an ancient surrogate motherhood story. This plot may seem familiar – Margaret Atwood borrowed it for her novel The Handmaid’s Tale. Hagar gets pregnant, and has a son, Ishmael.

But then, a few years later, elderly Sarah does get pregnant, and gives birth to Isaac. God’s promise has come true. Sarah has no need of Hagar or her son anymore, so she orders them to leave. Abraham agrees, reluctantly, and sends Hagar and his son Ishmael out into the desert to die.

Slaves being treated badly and abandoned by their masters was nothing new. In Hagar’s time, she is considered a nobody, less than a nobody. A slave, a foreigner, spurned by her mistress, a liability because of her son and her sexual relationship with Abraham. She’s the other woman everyone wishes would just go away. So, to ancient ears, it would have been shocking to hear that it is this woman who receives a visit from an angel.

If it is hard to understand how bizarre that is, let’s add a modern twist. We are told that Hagar was a slave from Egypt. Egypt is located in north Africa. Slaves are peoples who have beencaptured, usually in wars, and then brought home to do work for their captors. So, when Egyptians had slaves, they would not enslave their own people, they enslaved people they have captured or conquered. Egypt is surrounded by nations populated by Black Africans. Logically, there is a good chance that Hagar was Black.

Now, if you try to find images of Hagar on Google, you will be met with a sea of white faces.
Western art assumes she was white, not even Egyptian, much less Black. Whites like to see
Egypt as one of the founding civilizations of Europe, so when Egyptians are painted, they look
like white people.1 But, at the same time as many of these images were painted, there was one
group of people who did believe that Hagar was Black.

They were enslaved African Americans in the deep south of the United States. During the slavery era, African Americans were introduced to Christianity. When they heard the story of Hagar, they concluded she was probably a Black woman. They understood how Africa worked. They also identified with her – enslaved, abused, used for sex by the master, resented by the master’s wife, thrown away. That sounded all too familiar.2 Long before Biblical scholars put two and two together, enslaved African Americans had realized the likely truth that Hagar was Black.

Now, we moderns realize that in real life, angels rarely arrive to help people who are struggling. So what would be more realistic? What would really happen if a Black Hagar showed up today in Toronto? Imagine if, instead of the desert, Hagar was a Black woman who had been fired from her job as a nanny or housekeeper by her white boss, the father of her illegitimate child. Kicked out, homeless, starving on Yonge street. At the end of her rope, unable to find room in any of the homeless shelters, which are always full. A Black woman in the night, crying, screaming out loud in horror at the imminent death of her child. No angel arrives. But there’s a pretty good chance someone may call the police. Now what?

When white police show up and find a black woman in emotional distress, there is reason to be concerned. A few weeks ago in the neighbourhood where I live, High Park, the police were called to an apartment building to deal with a 29 year old Black woman who was having a mental health crisis.

Her mother had made the call for her daughter, Regis KorchinskiPaquet, who she wanted moved to CAMH, the Centre for Addictionand mental Health.  Regis was an active member of a nearby church. She loved gymnastics and dancing.

When the six police officers arrived, they told her mother and brothers that they wanted to be alone with Regis. A few minutes later, she was on the ground, 24 floors below, dead. Did she jump? Was she pushed? Unclear. The Special Investigations Unit of the police are investigating.

In the past few weeks, we have all been reminded that when Black people encounter the police, tragedy ensues far too often. The streets of America, Toronto and the rest of the world have been full of protesters, angry about the danger the police pose to Black people. Many have called for the police to be abolished entirely. Others have called for defunding. In Toronto, there is a motion that will be presented at City Council at the end of the month to reduce the police budget by 10%. The motion suggests that the money be redirected into teams of mental health professionals who could respond to mental health crises. The money could also be invested in community support to alleviate poverty and housing, which cause crises that result in calls to the police. That 10% would amount to 122 million dollars.7 They have called for a different
kind of angel to come to the help of modern Hagars.

It may seem extreme to cut the police budget – why not just ask for them to reform themselves? The problem is that the police have had a long time to undertake reform and it has not happened. In 30% of recent cases when police officers used force, the person they subdued was enduring a mental health crisis, and most of the time they were unarmed. Between 2013 and 2017, Black people were 20 times more likely than white people to be shot dead by the police. A 2017 study found that 60% of Black men has been harassed or treated rudely by the police.  When the Toronto police arrest someone, 40 percent of the time they strip search them, often in public. This is 40 times more likely in Toronto than in any other police force in
the country. Imagine Hagar or a Black man being stopped without cause and being stripped in
public, in this city. Does that sound like protection or humiliation?

None of this is new. Well-funded, blue chip studies on the problems with the Toronto police
have been coming out for decades.

Stephen Lewis wrote one in 1992. 13 Chief Justice Roy McMurtry wrote another in 2008, on the need for community programs for youth instead of police funding.14 Dozens of coroner’s reports have called for substantial changes in how the police treat the mentally ill and Blacks. In 2018, the Ontario Human Rights Commission released an extensive report on the same issues.

But despite all these reports, the Toronto police refuses to change. Its budget is now 1 billion dollars, the largest single item in the city budget. By provincial law, the Toronto police can spend that money any way they want. The City cannot order them to change their priorities. This disconnect has many consequences. For example, the city’s Vision Zero policy is dedicated to stopping the traffic deaths of pedestrians and cyclists. But despite this, the police have decided on their own to put less effort into giving out traffic tickets. Last year they gave out 66% less tickets than they did 10 years ago.16 This is totally out of step with city policy. But that’s how our system works. The police can do what they want, and the city has no legal power
to change their minds.

The people protesting are saying that the Toronto police force perpetuates and enforces systemic racism, and they are right. They are marching because the police have ignored all those government reports, funded by our tax dollars. We don’t need any more studies; they’ve all been written. The police don’t need a second, third, fourth or fifth chance to change. They’ve had that.

Regis Korchinski-Paquet should not have ended up dead shortly after the police arrived. Her life
should have been improved by their visit, not placed in greater danger.

The Special Investigations Unit which is studying the case has a track record of finding 90% of police officers innocent in the shootings and deaths of civilians.17 If change is going to come, we should not expect it to come from the police. They are not the angels we hope they would be.

In the Bible, God comes first to a rich man from a powerful country, and promises him more descendants than stars in the sky if he will be loyal to God. He becomes known as Abraham. But God also made a similar promise to Hagar, the enslaved, abandoned, powerless Egyptian woman. God sends an angel to her, too. God saves her life, leads her to water, and promises that her son will become the leader of a great nation. Our faith is founded on the story of a God who offers salvation not just to the people in power, but also those who have been cast out. The angels go to both. Hagar is the first person in the Bible to receive help from God. She is the only person in the Bible to name God. Whoever our God is, the plight of the weakest is critically
important to God’s plan for humanity.

The answer to systemic racism is to change the system. To do that will not require a miracle, or a revolution. Budgets and laws need to be changed. That’s doable. That happens all the time. What is harder is changing our minds. We will be told in the weeks and months ahead that the way we do things now is the only way it can be. God calls us to do better. To open our minds to a new way of doing things which is more just and fair. We will not be stepping off the deep end. There are decades of reports to guide us on how to reform our system. We can do this . We can bring the Abrahams and Hagars together to create a better, more just Toronto for all races. The way forward has been marked by angels.