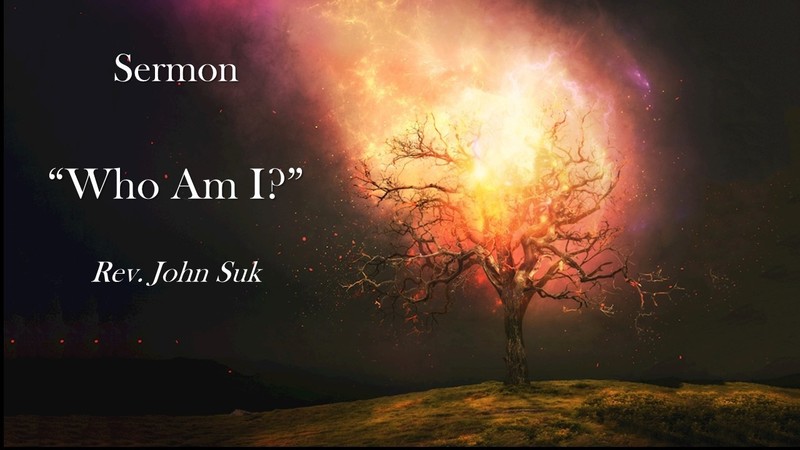 I just showed you and the children a cartoon clip from the cartoon film, “Prince of Egypt.” I also showed that clip to my Wednesday evening class on the Ten Commandments, just so that you will have some idea of how entertaining that class is! Join us!

In any case, while entertaining, this clip is not a wholly accurate retelling of the scripture Hubert just read. For example, according to Exodus 7, Moses was about eighty years old when he met God at the burning bush. He didn’t look eighty in the cartoon. And in our scripture, Ex. 3, nothing was said of Moses crawling through a cave to find a lost sheep, and nothing is said of Moses putting his staff or his hand into the burning bush. This is all poetic license.

One thing the clip gets right, however, is the name that God gives Moses. God’s name is “Yahweh,” which translated, into English, in our scripture, means something like, “I am that I am,” or maybe even just “I am.”

I ask this question cautiously because for Orthodox and Conservative Jews this name is very precious. They so treasure it that they have long decided not to sully it by actually speaking it. Instead, when observant Jews see this name in scripture, they substitute other words for it, like “Adonai” (which means “Lord,”) or “Ha Shem,” (which means the name).

But these are not our traditions, and so without meaning any disrespect, we can look at this text with new eyes. And what I’d like to know is, “Huh? Yahweh? I am? What sort of name is that?”

It strikes me that this name, “I am that I am,” is underwhelming

This name is pretty much a first-person singular conjugation of an ancient form of the Hebrew verb “to be,” as in the French, je suis in the verbal conjugation that continues tu es, il or elle est, nous avons, vous avez, ils sont & elle sont.”

The ancient Hebrew word for “I am,” doesn’t even have a distinguished etymology. It does not point back to an important place like the name Van Dyke does, or Farnham, England does, which means “from the meadow.” This name does not recall a distinguished vocation like Smith in “Joseph Smith,” or priest as in “Joseph Priestly.” And “I am” isn’t a poetic name, either, with susurrations or undulations like Diana or Susanna.

It is almost as if in giving us this vanilla wrapper of a name, God is hiding something—ironically, hiding who he or she really is. In fact, Isaiah even says, “Truly, you are a God who hides himself.” And Psalmists often complain about God hiding, saying things like, “Why I Lord do you stand far off? Why do you hide yourself?”

In our scripture, Moses also immediately recognizes that this divine name will not impress anyone. So, we learn in the next chapter, Exodus 4, that in order to convince the Egyptians to let his people go, God gives Moses’ staff the power to magically turn into a snake and his hand the power to turn leprous, as white as snow, or not, on command. Now, compared to the plain-Jane really-not-a-name, those two miracles are impressive! People might even follow a leader who can do such things.

But follow a leader whose God is named a form of the verb, “to be?” Not likely.

In fact, for all the attention ancient Israelites and modern Christians have given this divine name, in today’s passage, I don’t think that God’s name is actually the point of the story of the burning bush. It comes at the end of the story, where it seems almost tacked on, after the main thing has already happened. And what is that main thing? It is the actual, truest unveiling of God in the story, when God says, “I have observed the misery of my people who are in Egypt; I have heard their cry on account of their taskmasters. Indeed, I know their sufferings, and I have come down to deliver them from the Egyptians, and to bring them up out of that land to a good and broad land, a land flowing with milk and honey.”

I have observed their misery; I know their suffering; I have come to deliver them. This is our kind of God, whatever the name.

I get that this is not the only sort of story that gets told about God in the Old Testament. God sends plagues and punishments. God redeems from Egypt but sends into exile in Babylon. He is said to punish children for the sins of their fathers and mothers, for up to three generations. Some of the Hebrew Bible’s descriptions of God are not that nice.

But if there is an overarching theme in the Hebrew Bible, it is the slowly dawning realization of the Israelites, from Genesis to the end of the Hebrew Bible, that ultimately, God is a God for the least and the last, a God who wants justice and peace to kiss, a God who sides with the poor against the powers that keep them down, a God who teaches love of neighbour rather than war or violence.  …….

The God who says, “I have observed their misery; I know their suffering; I have come to deliver them.” The other stuff I mentioned, from my perspective, is ancient Israelites trying to explain their world, but sometimes getting God’s part wrong, especially early on in the story.  God is actually revealed, over the entire Hebrew Bible as loving and empathetic, as kind and merciful.

And as Christians, we see that same divine trajectory continued in the life of Jesus, who taught us that love of God is love of neighbour; Jesus, who turned the other cheek to a violent occupying army; Jesus who would not let religious leaders rule through fear; Jesus, who urged us to give water to the thirsty and clothes to the naked and to heal as he is said to have healed.

We see the same divine trajectory in Jesus, who finally gave his life for many. And in so doing, Jesus also said, if you have seen me, you have seen the father. That divine father’s exact name—if God even has one, is beside the point, to Jesus.

Look. We live in a time that values practicality. We know how to make our own COVID-19 masks, if necessary. We work for a living. We know how to invest our savings for retirement. We are the “there’s an app for that,” people.

Whatever we want to know we can find on the internet. And when we’re not being practical, we are entertaining ourselves with video games or iPhones or binge-watching Netflix, which is all good fun. Practically speaking, very few of us need to know God’s proper name to be perfectly happy.

That is, we can be practical for ourselves, and happy in ourselves, if we don’t open our eyes, to observe the misery of many, the suffering of neighbours, and their cries for deliverance. We live in a world where there is no shortage of those who are thirsty, or naked, or oppressed, or suffering injustice and violence—just as those Israelite slaves in Egypt did, long ago.

We have prisoners who cannot escape COVID-19. We have relatives in nursing homes. We have children who are front-line workers in hospital emergency rooms or grocery stores. We have treaties with First Nations we’ve shunted into economic dead zones called reservations. We have homeless who cannot practice social isolation and who now cannot even panhandle on the streets because no one is walking by them to beg from.   Over all, practically speaking, we have not done a bad job here in Canada when it comes to COVID. But we must not close our eyes or stop our ears to the least and the last or the brave just because we are comfortable, as Moses was, shepherding his sheep, before he became a liberator.

What we need now—collectively as Christians but also each of us individually—is God’s divine ability to see the misery, to know the suffering, and to desire deliverance for all.

Because while the state of the nation is improving, we don’t want to leave anyone behind. We want to bring everyone along—both those who have much, as we do; and those who are on the margins, and who Jesus encourages us to love first.

And so, we should and can. We can make decisions at our workplaces, we can make decisions about investing, we can give generously, we can keep an eye on neighbours and phone those who may be lonely and we can continue with social isolating and be patient and practice kindness – both as cogs in our institutions and as neighbours on the street—we can all contribute to the deliverance of Canada—and even the world.