Where is Wisdom to be Found During a Pandemic? 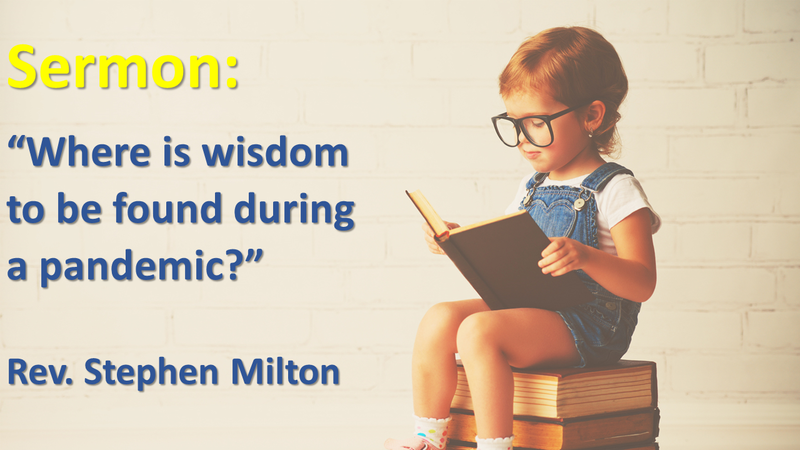 Where is Wisdom to be Found? That’s the question Job asks as he lies, covered in painful boils, at the lowest point in his life. It is famous story from the Old Testament, the plight of a man who feels he is innocent but is made to suffer anyway. Why did this happen to me? Job asks, over and over again.

His friends are sure they have the answer: Job must have sinned in some way. That’s the only explanation for why a man who was so wealthy, so well regarded in his society could be laid so low. For Job hasn’t just lost his health. In the space of a day, he has lost his ten children, his servants, his livestock – everything except his life, and his wife.

What Job and his friends don’t know is that Job’s situation is the result of a cosmic wager. The book of Job starts with a scene that sounds like a fairy tale. One day, God is in heaven among the angels. He gets into a debate with one of the angels about Job’s loyalty. The angel is called Satan because he is humanity’s accuser, our opposition party. This Satan says that Job is only loyal to God because he is rich. Take away his wealth and health, and he will reject God and curse him. God believes Job will stay loyal and pious. So they make a bet – Satan can go kill Job’s children, destroy his property, and take away all his health, but not his life. Then it will become clear whether Job’s love of God is genuine or just a side effect of his good fortune.

This fairy tale prologue leads to a very serious question: why do innocent people suffer? The story tells us very clearly that Job is blameless. He is generous, gives to the poor, thoughtful, kind and pious. But Job has no idea about the bet, so he cannot understand why he, an innocent man, should be punished by God. Because what everyone in this story agrees on is that when people get sick, it is always caused by God. Illness may come as a correction, as a punishment, as a message – but it always comes from God.

And for that reason, Job cries out, why me? What did I do wrong? How do I figure this out? Where can the wisdom be found that can explain my suffering?

That question is being asked, right now, by people all over the world. In the space of a just a few months, our civilization has been ravaged by a disease that didn’t even have a name last Christmas. It has spread along our airline routes to reach every part of the world except Antarctica.[1] Unlike Job and his friends, we do not believe that God sent this disease. We have moved on since Job’s time. We expect diseases can be explained by biology, not theology.

Nonetheless, like Job, there are literally millions of people lying in their sick beds asking “why me”? These modern day Jobs wonder why their lives have been turned upside down. Because as we have seen, this disease doesn’t play fair. Some people get it and never even know it. Others, the same age, get it and are knocked off their feet. Why am I in fear for my life while my friends, my co-workers, are fine? That question is being asked all over the world. Where is the wisdom to be found that can explain the horrible lottery of this disease?

We have been told that this disease is random in its victims, and as a result, we are all in this together. But early on, medical researchers noticed that this was not entirely true. Some people were getting the disease more frequently than others. The first obvious group which is at risk was the elderly. As we all know now, the older you are, the more severe the symptoms will be, and the higher the risk of death. Now, five months in, eight out of ten people who die from the disease are over the age of 65. [1] Young people do get this disease in severe forms, and die of it, but at lower rates.

But age is not the only factor. When examining who gets covid-19, it matters a lot where you live. Here’s a map which is put out each week by the city of Toronto’s Public Health department.[2]   It shows the infection rate per 100,000 people, based on testing data. The darker the area, the higher the infection rate. You can see that the highest infection rates are in the northwestern corner of the city. You can hover your mouse over the map to see the infection rates by wards. 1000, 1200, 1500. Now, if we do the same thing going down Yonge Street from Lawrence, here’s what those numbers look like. 100, 200, 150, 200… In Rosedale, there are just 150 infections per 100,000, whereas in some wards in the NorthWest there are 1500. Ten times as high.

This does not look like a random infection rate. This is very consistent. Many neighbourhoods get infected at five times the rates as others. So what’s going on? As you’ve probably guessed, income is a deciding factor.   Here’s a graph the City prepared a couple of months ago which shows the influence of income on infection rates.

The tallest blue line belongs to the poorest in our city. The slope of the graph slides downwards to the wealthiest, who get the virus the least.

In the intensive care units, another pattern emerged which is even more stark. The people who are getting the most sick, and who die the most often, are people of colour. This pattern was first noticed in London and New York. In Canada, we weren’t collecting race-based data when the pandemic began. But in May, the city started to sort Covid-19 patients by race. In August, they released the results. 83 percent of all Covid-19 infections in Toronto are among people of colour. [1] They make up 52 percent of the city’s population, but a much higher percentage of its covid-19 victims. 71 percent of all people hospitalized for covid-19 are people of colour. At that rate, there is nothing random about this disease at all.

How could this happen? The fact is that in this city, and others like London and New York, race and income levels are linked. That map of Toronto which shows the highest and lowest concentration of infections is also a map of where people of different races live.[2] The Yonge St corridor is largely white and affluent. The North Western part of the city, as well as places like Parkdale, are poor, and home to many people of colour.

People who have had to keep working through this pandemic. People whose jobs were deemed essential, or who needed the money so badly they couldn’t just stay home. People who live in crowded homes and apartments where social isolation was never an option.[3]   Why me, Lord, why I am sick with this? The answer, is not that this disease has been sent by God. The answer, tragically, is that it has been sent by society. Not only do people of colour working in low income sectors get this the most, they are also more likely to suffer serious complications, and die of covid-19. The death rates are three times higher in racially diverse neighbourhoods than in predominantly white ones. [1]

Why? Because as other studies have shown, racism and poverty are bad for you. They are bad for your health. Living in fear of society and the police is stressful. Black people who are randomly stopped by the police live with a kind of racialized stress which whites don’t have to worry about. Recently the Ontario Human Rights Commission released a report showing that Blacks in this city are more likely to be randomly stopped, harassed by the police, arrested and shot dead than white people.[2]

This is happening all the time. Just two weeks ago an 11 year old Black boy was playing in a park in the Beach. Everything was going fine until  he was suddenly surrounded by seven police officers. He and his terrified Black mother were told that a neighbour had called the police saying that two people had brought a gun into the park. The weapon? The boy’s nerf gun. [3] Imagine being that boy. Will his heart jump into his throat every time he sees a police officer? How does he ever relax in a park now? That sort of stress has been shown to lead to higher rates of hyper-tension and diabetes among Black people. These are exactly the kind of health risks which make people more susceptible to hospitalization and death from covid-19.[4]

Why me Lord? Why am I sick and dying? For Job, there was no answer, which is why he asked where is wisdom to be found. In our case, we can be certain that God did not send this disease. Human beings did not invent it, but we have decided how it will spread.

So where is wisdom to be found for us? In the reading we heard today we are told that wisdom is not something which can be seen, like an object lying on the ground. It is not something which can be bought, either. You won’t get it by hiring a consultant. Nor is it something easily possessed by human beings. It is hidden from sight. Then, after establishing how elusive wisdom is, our scripture passage seems to change the subject. We are reminded that God keeps this universe going by setting limits on the natural world. The oceans are held back from overrunning the land. Only so much rain can fall;  storms can only be so frequent and forceful. We are to understand that the universe is not random, it is kept in order by God. And so, when we approach God, our text suggests, we should have a sense of fear and awe, for it is God who has made our life and this beautiful Earth possible. Wisdom is knowing that we are not in charge, but that the universe does have an order to it.

But we are not just to be in awe of God’s ordered universe, we are told that we are to avoid evil. But what does evil mean here? It is not an earthquake or a volcanic eruption, those cannot be avoided, they just come. No, what God means by evil are the choices we humans make. Unlike the birds and the animals, we can choose how we fit into this wonderful universe. We can grab as much stuff for ourselves as possible, and forget about the consequences to us, the planet and other people. Or, we can take stock and decide that the price of this way of living is too high.

Like a flash of lightning at night, this pandemic has suddenly illuminated the deep inequalities of our city. We have a chance to take this moment, and decide that Toronto can be different. We can stop pretending that everything is okay, that we are a multicultural paradise. Our ICUs tell a different story.

If we want to want to be a world class city, let it be in the name of promoting equality and equity for every person who lives here. As our neighbours to the south give up on that dream, let us take it up.

Let’s provide affordable housing; let’s start filling all those empty condos. Let’s give our essential workers proper pay for what they do, and build a transit system that suits their needs. Let’s show the world where wisdom is to be found.

May it be right here, in this gleaming city by the Lake.

*footnotes can be found in attached PDF document.