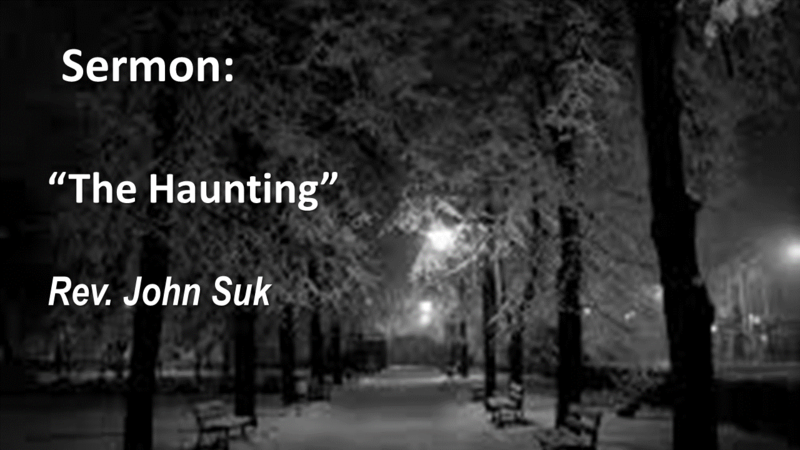 And certainly, no one laughed at God when God killed 70,000 innocent people, as he does in the legend we just heard Diana read and see in this screen. There is nothing to laugh about here. This story is what some Old Testament scholars call a “text of terror.”

Once upon a time God’s anger burned against Israel. This happened a lot. Usually, God was angry because God was a jealous God and became upset when Israel worshipped foreign gods like Baal. After such a sin, divine punishment usually followed: perhaps a world-wide flood or a military defeat at the hands of the Philistines.

There is one odd twist to this story, though. It seems that God is angry with Israel, here, even though they had not sinned. God is simply angry, like a grumpy old uncle. No reason is given. So, not having an excuse to punish Israel, God has to incite David to sin to justify his unkind divine anger. According to our story, God “incited David, saying, ‘Go and take a census of Israel and Judah.’”

When David does the evil thing God makes him do, God then punishes David by sending an angel, not to kill David, but to kill the innocent Israelites that  God was  unaccountably angry with in the first place. Seventy thousand die. The whole thing stinks to high heaven, even though God stopped the angel at the gates to Jerusalem. For sure, no one laughs at God in the middle of such an unjust and evil plague.

But here’s my question. Why would any Israelite write up this sort of ugly, unflattering portrait of God? And why would the Bible’s editors then bother to remember it and publish it? I mean, this story makes God look very bad, makes God guilty of what we would call a crime against humanity.

Of course, this is not the whole story. Other scriptures contain lovely stories and poems about God. For example, there is the story where God rescued Israel from slavery by bringing them out of the land of Egypt. The Psalmist writes, “The Lord is my shepherd.” The Bible says God is compassionate and gracious, slow to anger, abounding in love and faithfulness. Jesus tells us God is love. But all these nice Bible passages just make our questions about the 70,000 innocent victims that much more pressing.

So, what is going on? Well, I think whoever wrote this story down was trying to make sense of human suffering. Long before there were scientific explanations for plagues or crop failures, the only possible explanation for these sorts of terrible events was God. The Israelites and Egyptians could not even imagine another possibility. Every human alive at that time would have agreed. The ancient Israelites just knew that God must be the source of both their blessings and curses. They knew that like we know the sky is blue.

So, what do you say about a God you love but whom you believe sometimes does bad, even genocidal things? Well in our story, you say that God relented of his plan to kill even more than the 70,000.                 But that actually isn’t a great translation. What the Hebrew really says, and what the more politically-incorrect King James Bible says, is that when the angel stretched out his hand to destroy Jerusalem, “the Lord repented himself of the evil!”

What do you say about a God you love but who sometimes does bad, even genocidal things? Well what you hope you can say, at least sometimes, is that God repents himself of such evil.

In fact, it isn’t just in this story that God repents. In Genesis God repents of creating humans. In Exodus, God repents of wanting to destroy Israel when they built a golden calf at Mount Sinai. In 1 Samuel, God repents of choosing Saul as Israel’s first king. In Jeremiah God actually says, “I am weary of repenting!”

But by having God repent of evil, the author of 2 Samuel is trying to have it both ways. He acknowledges that if there was a plague, God must have caused it—everyone knew that. But by making God repent of that evil, the author can also claim that, deep down, God was nevertheless good too. It’s a compromise. For the story teller here, even if God is the author of our misfortunes, ultimately, we can rely on God to change our fortunes for the better, too.

This story, when we read it with modern eyes, reminds us of the common-sense silliness of seeing God as the almighty puppet-master of our misfortunes or blessings both.

Thus, this story of God killing 70,000 innocents also invites us to reject the caricature of God in we hear in Martin Luther’s famous hymn: “A mighty fortress is our God, a bulwark never failing, from age to age the same.” After all, how can a God who repents be the same from age to age? How can a jealous, sometimes vindictive God be mighty—or truely loving?

This story invites us to reject the catechism image of God I grew up with as a child, the God “without whose will not a hair can fall from my head.” Such a God would also have to be the cause of cancers and car accidents and environmental cataclysms. We know better.

The story of the God repenting of his divine genocide undermines our ancient Greek philosophical notions deeply imbedded in Christian theology that God is immutable and impassible and impeccable and omniscient and almighty and so far above us as to be irrelevant—even though some Christians are still trying to teach children this sort of thing. But, “no.” God isn’t all that high and mighty and Big Brother stuff, the ultimate cause of both our suffering and our pleasure.

Not at all. In fact, this story we read suggests that the ancient Jews were onto the fact that as much as they might want a high and mighty Big Brother in the sky, there was something about this idea of God that didn’t make sense, that was objectionable. And so, the ancient Jews—in some of their scriptures, at least—guarded against falling for a God who was too big, who should have been able to make everything okay, but usually didn’t.

A famous book of the ninety-eighties argued that we don’t take these divine attributes seriously enough. It was titled “Your God Is Too Small.” But I think J. B. Phillips got it all wrong. I think too many Christians still have a picture God as too big.

After all, we now know that God did not cause COVID. A virus did—a virus that jumped from animals to us because of human farming practices.

God does not cause wars. Humans do.

God does not separate children from the parents, and then lose the parents. The US government does that.   God does not heal your aunt’s gall bladder. Modern medicine does . . . or not. God does not open doors so that you get the job when you ask nicely in prayer; you prepare yourselves to open your own doors through education and networking and pluck and a dose of white privilege, usually, too.  God does not make the planets spin and black holes devour stars, no does God grant wishes like Jiminy Cricket and Santa Claus rolled into one. So, if God is not a mighty fortress, or a genocidal monster, or a Jiminy Cricket Santa Claus, then what is God? What does God do besides repent when she gets it wrong?

God is the cosmic presence who prays to us with sighs too deep for words, as in Romans 8, pleading with us to become fully human, which means, to own our responsibility for the way the world is. God is in Jesus, who invited us to take a stand against empire and power, for the sake of the least and the last. God is in us as the prophet’s “still quiet voice,” prodding our every bumbling act of love and any effort to embrace neighbours, including the homeless and mentally ill and drug addicted who lift their hands up to us, hoping we will answer their prayers.

God haunts us, whispers to us, powerlessly and prayerfully, through scripture and our conscience and the example of Jesus, to act justly, to love mercy, and to walk humbly with him rather than merely bow in fear before him. But God does not wave wands or do magic, for good or ill.   The American author Stephen Crane, author of The Red Badge of Courage, gets it right, when he says: “The voice of God whispers in the heart. So softly that the soul pauses, making no noise, and strives for these melodies--distant, sighing, like the faintest breath, and all the being is still, to hear.”

I said, God haunts us. Sort of like in the John Rutter hymn we’re going to hear now, but which I’ve annotated for you now . . .

We need, compared to historical Christianity, a smaller God. Not the almighty fortress living in unapproachable light, but a quiet spirit that never fails to prod us, move us, to seek and create our own shalom.