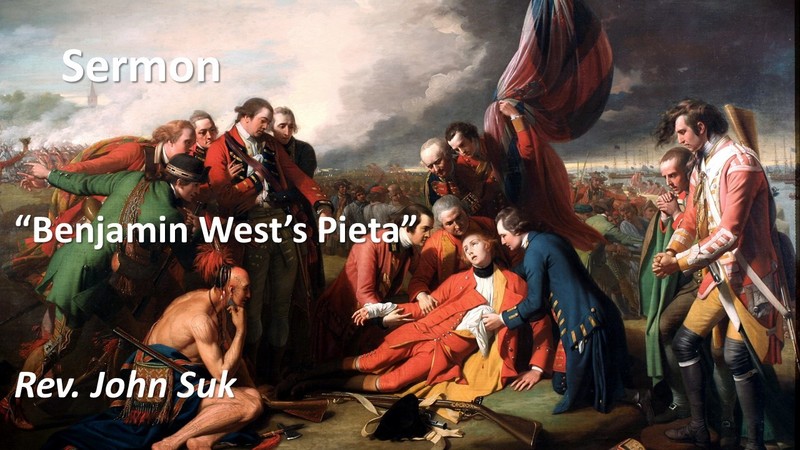 Christian theologians and artists have always been in love with Jesus’ mother, Mary, who they named, Theotokos, mother of God. Liturgies, music, and prayers especially focused on her purity and suffering.

One of the suffering moments—not actually mentioned in scripture—was when Mary first held the body of Jesus after it was taken off of the cross. This moment is called The Pieta, which can be translated as “The Pity,” or “The Compassion.”

Here is an early example, the Rottgen Pieta from the fourteenth century. It is graphic and gritty and moves me. Jesus’ wounds still flow. He is emaciated, ugly, broken, just as you would expect a crucified holy man to look. Mary is shocked, on the verge of disbelief. Take a closer look, here, at their faces.

The medieval Germans peasants who saw this Pieta in their church knew this kind of suffering for themselves. Medieval life was, as Thomas Hobbes said, was “nasty, brutish, and short.” The Rottgen Pieta offered those peasants both a Jesus and a Mary they could identify with.

But there is another, darker side to this and similar devotional sculptures. The sculpture suggests that suffering is holy. Mary and Jesus’ suffering here justifies suffering as a reality of life peasants had to accept. The Rottgen Pieta—and many more like it--was used by the church to teach, nurture—and control—peasant believers.

Not so Michelangelo’s Pietá.  It served a very different purpose for a very different audience. This sculpture, found in St. Peter’s Basilica in the Vatican, is one of the most admired works of art of all time.

The earthy realism of Rottgen is gone, replaced unearthly Platonic idealism. Mary, even as the mother of a 31-year old man, is still a beautiful virgin, the prototypical perfect woman. And Jesus, even in death, is Adonis-beautiful, too.

The story here is that Michelangelo was hired by the French Cardinal Jean de Bilheres to create this sculpture for two reasons. It was to serve—and for a while, it did—as Bilheres’ tombstone. But more importantly, Bilhere was in Rome as a French ambassador after a disastrous war between France and most of the small Italian Republics. It was a war marked by the brutal sack of Mordano, about 250 kilometers north of Rome. The French army put all its citizens, including women and children, to death.

Now, after this inconclusive but brutal war, Bilhere was supposed to help smooth things over. And so, he tasked Michaelangelo, an Italian artist, to use a notably French and German theme, The Pieta, to sculpt a work of Italian marble to place in the French chapel of the first St. Peter’s in Rome, Italy. A peace offering that bound the two peoples together.

With Michelangelo’s Pieta, the suffering of Mary and Jesus is a passing whisper—as Bilhere hoped the suffering of Mordano and Italy might be soon forgotten, too. The ugliness of war is here swallowed up by the stunning beauty of national reconciliation symbolized by Jesus’ reconciliation of humans to God, through his death. The Pieta is a stunning piece of political theater.

Which brings us to a modern pieta, Pablo Picasso’s Guernica. You’ve seen this painting. I don’t know how to speak of its beauty—it is striking and compelling and abstract, though.

Here Picasso painted the suffering of the village of Guernica during the Spanish civil war, just before WWII. The Nazi Luftwaffe bombed that little Basque village on a market day. There was no military target. The purpose was simply to sow terror. Two hundred and fifty townspeople died. It was a modern Mordano.

Thus, like Michelangelo’s Pieta, Guernica is very, very political. But instead of trying to smooth over a war, it puts Nazi war crimes front and center, condemning them.

And if you look closely, you will see on the far left, a pieta—Mary holding Jesus in her lap. It’s Rottgen all over, but in Picasso’s cubist style. Do you see it? On the left?

In case you can’t, here is a reproduction, done as a sculpture, by well-known American artist Arthur Lopez’, in the Mexican-American Santero style.

I have one more pieta to show you, Benjamin West’s, “The Death of Major-General James Wolfe.”                 You remember James Wolfe. He was the commanding British officer during the French-Indian war. The French were besieged at Quebec, and tried to break through British lines with a surprise attack on the Plains of Abraham, that failed. The battle only took an hour, but during it Wolfe was shot and died of his wounds.

The battle led, soon after, to France’s exit from New France. Wolfe has, forever after, been seen as Canada’s first war hero, and the epitome of the British Empire’s fighting spirit and military prowess.

Wolfe’s painting, of course, is yet another version of The Pieta. West knew Michelangelo’s Pieta well from when he lived in Rome as an art student. Here, West lays out Wolfe as Michelangelo laid out Jesus. General James Wolfe is a sacrificial lamb who died to establish true civilization in the New World jungle. One commentator writes, “This deliberate visual association between the dying General Wolfe and the dead Christ underscores the British officer’s admirable qualities. If Christ was innocent, pure, and died for a worthwhile cause—that is, the salvation of mankind—then Wolfe too was innocent, pure, and died for a worthwhile cause; the advancement of the British position in North America.”

In contrast to other paintings of Wolfe’s death from the same era, West fill his painting not with regular soldiers, but with military dignitaries. In fact, none of these men were actually there. West added them to add dignity to the scene. One of those watching is a First Nations warrior, looking on Wolfe adoringly—in stark contrast to how most First Nations would have felt about these European wars that kept dragging them in.

But West has no time for such objections. He is making myths that justify the violence, greed, and visions of world domination that are at the root of all empires, including the British Empire. West here is an evangelist for wars on behalf of the crown and for territorial expansion.

All of which brings me near to the end of what I want to say this morning. All of these works of art that I’ve show you this morning served propagandistic ends. In each of them, the story of Mary holding Jesus’ body, a religious theme—was used to score political points.

The Rottgen Pieta served the churches need to tell the story of Jesus to illiterate peasants who needed comfort, assurance—and who needed to be kept in line. It said, “shut up and embrace your suffering, like Mary and Jesus did.”

Michelangelo’s Pieta was meant to paper over war crimes. It was an offer of arm’s length, platonic friendship as a substitute for war.

Picasso’s pieta was exactly the opposite. It served as a condemnation of war by including a very Rottgen-like Pieta that represents the evil of war.

And the question for us, of course, is this. Will we let Remembrance Day, as well as its rituals and music, use us in a similar way? Or will we see through some of the myths to the fact of war’s evil? To the actual pain and suffering of both soldiers and civilians? Will we, perhaps, use Remembrance Day to organize for no more wars?

This week, we ought to remember the heroism of our boys; but we also remember Flanders Fields and the poppies their bodies fed. We remember the WWI sacrifices of Vimy Ridge and the Somme and Passchendaele, but we also now understand that ultimately, these battles were fought for the elites of a British Empire against the elites of a German Empire, rather than for any common good or high moral principle.                 We have fought other morally ambivalent wars. The Royal Mounted Police against the Metis. The first overseas deaths of Canadian soldiers in a totally useless Anglo-Boer war that mostly served to make the British Empire richer while brutally erasing Africans. But our boys died fighting the horrific reality of Nazism in what is sometimes called the twentieth century’s only just war. Our boys liberated extermination camps and liberated my ancestors in Holland. But always, whether the cause was just or not or just middling—our men were always true and valiant.

And now I wonder, how will history judge our time in Afghanistan, after the Taliban is back in control, as they seem destined to be? Or our material support for Saudi Arabia and its ruthless war in Somalia?                 I do not know.

But today, we nevertheless remember the Christ-like suffering of all our military martyrs. In their memory, and to prevent the need for remembering more soldiers in the future, we commit our Remembrance Day not merely to making glorious national myths, but to learning the hard lessons of history, history as objective as we can make it.

Even good wars are hell. We must do all within our power to avoid falling for heroic myths that want to use us, and instead, as a nation, build lasting peace wherever we can lend a hand.

This is the most fitting Remembrance of all.