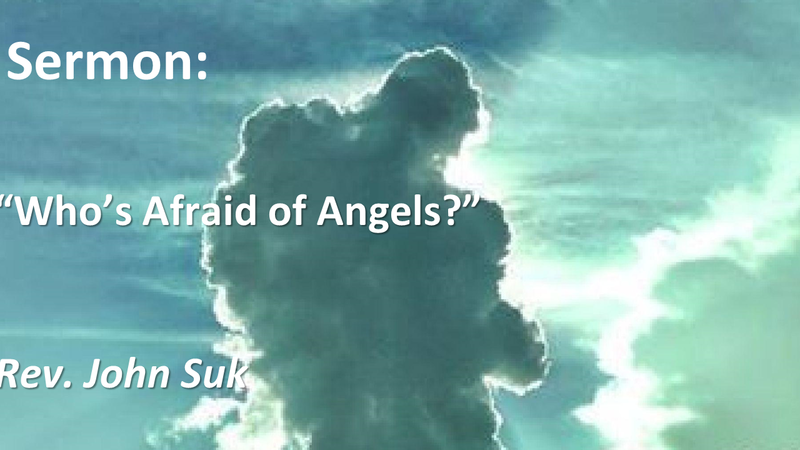 On the one hand, we adore angels. We put them on our Christmas tree ornaments, where they must surely be performing Bach’s Messiah on their pretty trumpets. On Valentine’s Day, we send each other cards illustrated with chubby, cherubs; soft, warm, cuddly babies armed with love darts. Sweetly smiling children are "angelic." Art history is full of “pretty” females in flowing robes who embody whatever that era’s idea of beauty was.

On the other hand, the Bible’s myths and legends about angels paint a very different picture—as in today’s scripture readings. When the old priest Zechariah meets an angel in the temple he was "startled and gripped with fear." When the angel Gabriel visited Mary a short time later, Mary was greatly troubled. And when angels appeared to the shepherds, scripture tells us they were terrified. Ironically, very few artists from any era get the terror or even try to paint angels that might inspire such terror, Natalia Goncerova and Salvador Dali being among the exceptions. Each of these Biblical heroes—and a dozen or more besides, in the rest of the Bible, tremble, tremble, tremble when an angel shows up. Their knees knock as they fall face down in alarm.

So which will it be? Angel food cake made from egg whites and sugar or Goncherova’s vision of angels throwing fire and brimstone down upon the earth, as in the book of Revelation?

This indecision on our part, with respect to the divine, is nearly universal. I think C.S. Lewis, in particular, hits the nail on the head in a scene from his book for all ages, The Lion, the Witch, and the Wardrobe.

In this book four children are wondrously transported to the parallel world of Narnia by entering a wardrobe—a standing closet—that is a magical portal. The children discover that Narnia is full of talking animals and flying horses and wicked witches. As on Earth, good and evil are locked in a life and death struggle in Narnia.  In one scene, soon after the children arrive and begin learning about Narnia's troubles, a family of kind talking beavers tells the children that Narnia is awaiting the return of their savior, whose name is Aslan. He will make everything better.

"Ooh!" said Susan. "I'd thought he was a man. Is he--quite safe?  I shall feel rather [afraid] about meeting a lion."

"That you will, dearie, and no mistake," said Mrs. Beaver; "if there's anyone who can appear before Aslan without their knees knocking, they're either braver than most or else just silly."

"Safe?" said Mr. Beaver; "Don't you hear what Mrs. Beaver tells you? Who said anything about safe? 'Course he isn't safe. But [Aslan's] good. He's the King, I tell you."

Angels too. Not safe but good. King of the Beasts, yet a redeemer. Dangerous but long-awaited. Bruce Bannerman or Hulk; Jekyll or Hyde. What is the divine, really?

One the one hand, we long for the courage we need to face life’s troubles and sometimes find it in the God of power and might, the Lord of a host of angels flying F-16s, or a Holy God of wrath who justifies us, his chosen, rather than the wicked who oppress us. And angels are God’s emissaries, clothed in armor, bearing swords, and wreaking destruction upon God’s enemies, and ours. Nice! When they are on our side.

On the other hand, we also long for a God who is approachable.  A God who is our buddy, a God with whom we can have a personal relationship, who has a nice plan for our lives, a God meek and mild like Jesus, born in a stable, no crying he makes, who grows up to heal and laugh and even turn water into wine in a pinch. A God whose angelic wing-men watch over us and whisper, “do not fear.” A God of cherubs.

Our music is uncertain on this point too. We just sang, Oh Come, O Come Emmanuel. But which Emmanuel do you want, which kind of divine? A Dayspring to cheer us by drawing nigh, who disperses the gloomy clouds of night? Or the rod of Jesse, who fights Satan’s tyranny from the depths of hell, a Lord of might and majesty and awe?  Or maybe Banksy’s cute angel of death, cute but lethal, the most mysterious of all?

What sort of divine presence are you hoping for this Christmas?

Of course, what we want and what we get are not necessarily the same.

But this is what I think. The divine we can surely still touch base with during Advent—even 2,000 years Jesus’ life and death—is neither the fierce lion king sort of divine nor the loving embrace of a friend in Jesus. The divine we get during advent is neither the fear and trembling th at Gabriel inspires nor the peace she offers. These visions are mythical, like the stories themselves, myths that say more about what we long for or the help we think we need, than about the divine as it is in itself.

But what we can imbibe in, during Advent, what we can remember, what we can take away from these lovely stories, is the light, the light of Christ. We heard about this light in the anthem. “The people that walked in darkness have seen a great light: and they that dwell in the land of the shadow of death, upon them hath the light shined.” We hear about this light in the Apostle John’s more philosophical Christmas poem, too, where he says of Jesus, “in him was life and the life was the light of all people. The light shines in the darkness and the darkness did not overcome it.”

Listen. There is no shortage of darkness these short winter days. And there is no shortness of darkness in the world. Each of us have our own crosses to bear, shadows that go with us—illness, age, loss, and tragedy. All of us have had Coviditis—mere Covid moments of depression last April becoming Covid occasional hours by September and lasting for days at a time by now. It sometimes feels like this pall will never lift, even though we know a vaccine is coming. And then, too, there is the list of troubles we always have with us, like the poor: racism and sexism, environmental calamities and political disappointments. I’ve listed these many times before.

And in fact, there will be no angels appearing at our lockdowns this Advent, bringing us personal tidings of great joy. But there is the example and teachings of Jesus, our light. He can’t snap his fingers to make everything better, but he has given us a plan to make the world shine, once more.

It’s simple really. Do justice, love mercy, walk humbly with the divine, doing the best we can. Because the secret truth about Jesus’ light is that it really is in us, and if we stand together, work together, and each of us join our little lights together, we can make a dent in all that trouble. We together can be a light set on a hill to dispel the dark.

And that would be divine in our time.