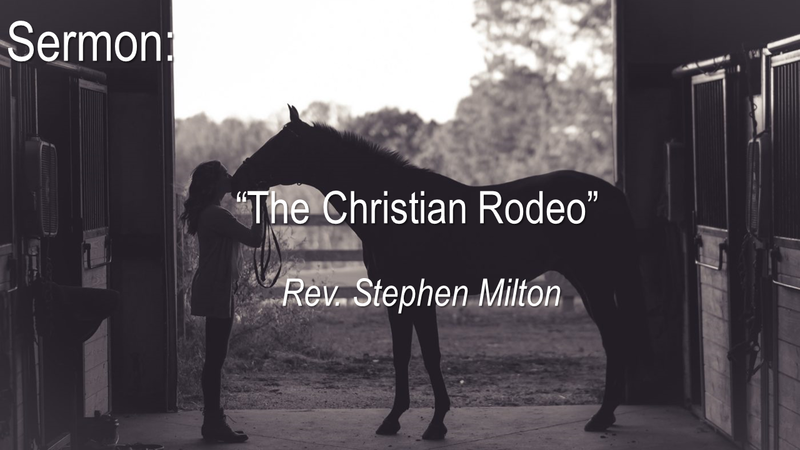 Today’s scripture reading is a familiar one, but to be honest, I find some details in it really puzzling.   It’s clear that when Jesus rode in on a donkey, he was making a statement. That same week, the Roman governor Pilate would have entered Jerusalem riding a horse, accompanied by a large retinue of soldiers. Security was always increased for Passover week. So Jesus’ parade looks pretty pacifist and humble in comparison.

But in the scripture reading we heard today, the gospel writer Mark seems obsessed with the kind of animal Christ will ride on. He goes on and on about how the disciples should go into town to find a young donkey colt. It has to be this exact animal that Jesus rides in on. Why? Who cares how they found Christ’s ride, or whether he was on an old donkey or a young one?   There are some nuances in these details which we modern city dwellers miss. We don’t ride horses or donkeys to get around town. In fact, I suspect that the last time most of us were on one was when we were on vacation. And, chances are, when you paid a few bucks to go for a ride on a horse or donkey, they gave you an older, well trained animal. No one stays in business for long if the tourist gets thrown off her horse. So chances are, you don’t have much personal experience with young colts, the kind of animal Christ rides into Jerusalem.

But to the people who read this story, and saw Jesus ride in, they knew what it meant to be on a young colt. Colts don’t know that it’s normal to have a human on their back. That doesn’t come naturally. Colts, especially young colts, need to be broken in. If you simply hop onto one, it is going to do everything it can to throw you off. So, when Jesus asks for a young colt, he is asking for trouble. Is this going to be a scene from a Christian rodeo, where Christ rides a broncing buck, desperate to throw him off?

That’s not what happens. He rides in on this untamed donkey, without any trouble. This would be a cause for amazement for anyone watching, and people reading this text. When Christ rides a young, untamed animal, it obeys.[1] This is Christ’s version of the rodeo. [1] Clement of Alexandria, The Instructor, Book 1

There is another symbolic meaning at work here, too. In the Hebrew scriptures, donkeys are symbolic of the Gentiles.[1] You’ve seen this symbolism before, although you may not have recognized it. Here’s an ancient picture of the nativity.   [1] Augustine, Tractates on the Gospel of John, 51:5

It dates from the 4th  century. In it, we see the Christ child, as well as a donkey and an ox. They aren’t mentioned in the gospel account, but they are always there in the art. Why? Because in the prophecies in the Bible, it is said that the ox represents the Jewish people, and the donkey represents the Gentiles. So Christmas images want to make it clear that Christ’s birth is not just to save the Jews, but the Gentiles, too.

So, when Jesus rides on a donkey’s colt, he is saying that he has come to tame the Gentiles. This was a meaning known to the earliest Christian writers and theologians. One of the first hymns we have records of is from around the year 200. It addresses itself to Jesus. Here is its first line:

“Bridle of colts untamed, over our wills presiding;”[1] This hymn was written for gentiles who had converted to Christianity. For them, the colt Jesus rides on symbolizes Gentiles like themselves.

But that begs another question: why did gentiles like the Romans and Greeks need to be tamed?   In modern times, we tend to see the Romans as an advanced civilization for their time. We respect their technology, their engineering, and their rule of law. They had mighty armies, and kept the peace.

But what we forget is how violent their society was. We know from our movies and books that people often spent their day off going to the forums to watch gladiatorial shows, the same way we watch baseball or football games. During these Roman games, it was normal to watch wild animals rip prisoners apart. Gladiators would kill and behead criminals, all to the roar of the crowds. One way to understand just how normal this was is to look at children’s textbooks from this period. Scholars have found some, and in them there are accounts of children going with their fathers to see court cases held in the forum.

They watch a court case where men are tortured and beaten to death when found guilty.[2]The students were expected to write these sentences down as practice for their penmanship.  It would be like a Dick and Jane book now that read, “ See Dick Run. See Jane jump. See a man being beaten to death.”

Cruelty was pervasive, everywhere. It was normal for male homeowners to  beat  and rape their slaves, and even crucify them. This was legal, since slaves were simply property, to be disposed of as you wished, like any farm animal. One third of the city of Rome was comprised of slaves, each of whom lived in fear of being beaten or killed. Unwanted babies were left outside on street corners to die, or be scooped up to be raised as prostitutes. Even when rich Romans killed each other, there were trials, but the guilty were rarely punished. Instead, they were given enough time to escape. [3] Murder and beatings were common, the way car accidents are now. They were just fact of life for the Romans. It was a deadly, cruel, sick society. And it was these people who had invaded Israel. It was because the Romans were in Jerusalem that the people sang out Hosanna to Jesus – words that mean “Save us.”

So, what is the answer? The Jewish people may have hoped that Christ as the messiah could form an army and expel the Romans from Israel. But the people who became Christians after Jesus died knew he did nothing of the kind. Instead, of ware and hatred, he preached peace. He wanted to break the cycle of violence which begets acts of revenge. And to do that, Jesus decides to die in a way that changes the course of history. His followers know he is innocent, and that he was killed. But his story did not inspire a Christian revolution hell bent on revenge. Instead, the people who became his followers and wrote his story down became champions of peace. They even prayed for their enemies the Romans, even while they were being persecuted. How did that happen? Why didn’t Christian’s thirst for revenge when this innocent man was killed? How did we, followers of an innocent man who was tortured and killed, become champions of peace?

There is a curious detail in today’s scripture reading which provides a clue. In Mark’s account we are told that when the disciples are sent into town to find the young colt, they can just take it.

If the owner objects, Jesus says, just tell him the Lord needs it. Then he’ll let you take it. Jesus doesn’t say go to Joe Blow’s house on such and such a street. He just says take the first young colt you see. The owner will be okay with it.

But would he? Donkeys were beasts of burden, who could be useful carrying people and cargo for years. They were the pickup truck of their day.

Imagine that you have a business that requires a pickup truck for deliveries. You have just bought a new one which has been delivered to your driveway. You will be paying for it for years. Before you can even take a spin in it, one of your kids walks in. He tells you that two strangers are outside who want the keys to your truck because their boss needs it. Do you give these two strangers the keys? Not likely. Neither would the owner of this young donkey Christ wants. So how did the disciples get the donkey?

The story tells us that Christ uses his powers to overrule the reasonable objections of the donkey’s owner. It’s strange, because Christ doesn’t do this to people. He overrules demons all the time. But this is the only time he uses his powers to overrule a human being’s will. And the timing of this little miracle is important. In the next few days, Jesus will be arrested, tried and crucified. What Mark is trying to communicate here is that Jesus has the power to overrule all of that. He could use his Jedi mind trick to send the guards to arrest someone else. He could have convinced Pilate to set him free. Instead, Jesus is sentenced to a horrible death on the cross, despite his innocence.

Christ’s willingness to be killed, despite his innocence, is critical to the Easter story. He volunteers to go to his death. That means his followers will not need to seek out revenge, because Jesus could have overpowered Pilate just as easily as he borrowed this colt from his owner. Mark is showing us how Jesus found a way to break the cycle of violence and revenge. His followers will not need to arm themselves and attack Rome in Christ’s name. Instead, they embrace another way. Jesus asks them to love one another, and even love the ones who killed him. And that changes everything. Violent, blood thirty Roman society is invaded by a bunch of people who live simple ethical lives, helping the poor and strangers. They practice the radical act of loving not just their friends and family, but even their enemies. Praying for them, even when they are being tortured by them.

And we have seen the result. For the past two thousand years, Christians like us have been gathering, wishing each other the peace of Christ. Celebrating Christ’s entry to Jerusalem on that young donkey. We gather each week to celebrate that Christ showed us another way. One not founded on anger or hatred, but one based on cultivating love within ourselves, and sharing it with strangers. That love movement is what hollowed out the Roman empire. In time, Christians rejected slavery, and stopped attending the bloody games in the forum. The Roman Empire was forced to follow.

Christianity holds out the promise of a way of living and running societies based on love and compassion, even for our enemies. It is not an easy way to follow, and it is just as often ignored as abided. We know that even 2000 years later, we still need to be tamed by Christ. To guide us on a peaceful path where all people can live safely, happily and in harmony. We’re still being tamed in this Christian rodeo. Like that colt, we accept Christ on our back and hope that he will help us have a smooth ride in this life, for us, and for the sake of others.