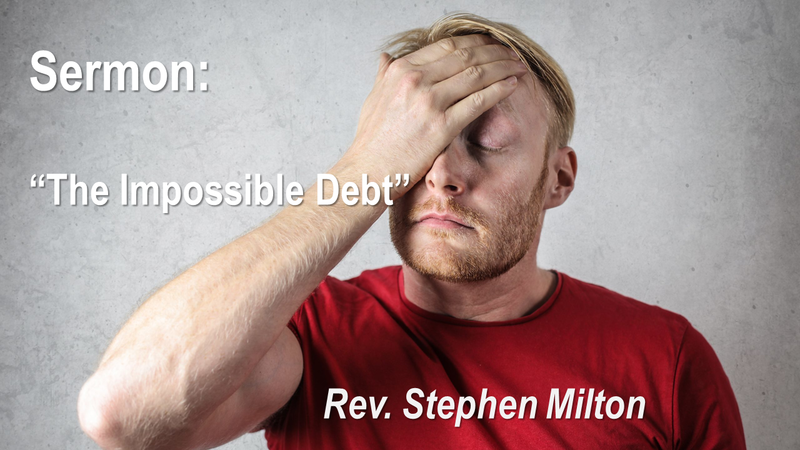 On Good Friday, Christians are told that Christ willingly got onto the cross to redeem humanity. To pay the debt of our sins. That idea, once so central to the faith, has become subject to debate over the last century. Some scholars have seen Jesus as simply the leader of a liberation movement who was killed for being a danger to the Roman state. Others find the whole idea of sending God’s son down to Earth to be tortured to be akin to holy child abuse. Others reject the idea of paying for our sins as being unrealistic at best. Most of us are good people, we haven’t sinned enough for anyone to need to die on our behalf. What does it even mean to die for humanity’s sins? The whole idea of Good Friday has become less clear, and so, for many, irrelevant.

What does it mean to die for our collective and personal sins? Why would that even be necessary? Perhaps a secular example might help. As Canadians, living in Toronto, we are living on land that was once occupied by Indigenous people. When Europeans arrived here, we negotiated treaties with them so the land could be shared. In 1763, the British formally declared that all land occupied by Indigenous people belonged to them unless explicitly sold to the British government. [1] But in practice, things went differently. Indigenous people thought treaties were about sharing the land, so they could still travel through it, and fish there.[2] But to the British, all sales were final, and the Indigenous people were kicked off the land. Mills were built on the rivers, spoiling the fishing, even when treaties specified it should be protected. [1] Indian Claims Commission Mississauga’s Of The New Credit First Nation Inquiry Toronto Purchase Claim Panel Commissioner Daniel J. Bellegarde, 12., June, 2003. [2] Special Places, 73-5.

In 1867, when Canada became a nation, we changed the rules again. The Indian Act declared that all land belonging to Indigenous people would be held by the federal government. Their land was now our land. They never agreed to this or asked for this, we just made it happen. We passed laws so that Indigenous land could be sold or appropriated when it suited our government. People like the Mississauga’s who once roamed all over the GTA, hunting and fishing, were now legally required to live and stay on a small reserve out in Brantford. For many decades, Indigenous people needed government permission to leave their reserves. Today, 95% of indigenous people live below the Arctic Circle, but they own just .5% of the land. The rest belongs to us.[1]

If we wanted to be ethical people, we might consider how much we owe the Indigenous people. How much money have we made from oil, gas, forests and mines on land we took from Native people? Could the Toronto financial district even exist without the earnings from all that former Indigenous land? And then there are the more intangible debts we owe. How much money would it take to compensate them for their forced relocation to reserves? Or the damage done to their culture when we banned their languages and religious ceremonies for decades under the provisions of the Indian Act? [2]How much does it cost to pay for the trauma children experienced in the residential schools?

We know the answer: more than we can possibly pay. Each of us is a beneficiary of this massive land grab, even if we don’t know the details. So, what should we do? There are several possible responses. One is to deny it. To be faced with an ugly truth, like Peter was in the courtyard, and to deny any knowledge of it. The other is to shrug and say, “forget it.” This is simply the way of the world, our civilization won, theirs lost. Let’s move on. We’ll pay only what the Supreme Court says we need to pay in land settlement claims.

The third possibility is that some of us will look at this and feel guilty. We did this, and we don’t have the means to fix it. Yet the damage is real. An ethical person who wrestles with these issues can feel helpless, despondent and paralyzed. Understanding this can worsen your life, not improve it. So, we tend to push it away, and carry on as before. Ready to steal from someone else. Not very ethical.

We are not the first people to have incurred a debt greater than we can pay. The French, the English, The ancient Romans, the ancient Egyptians, the Incans, the Mayans. This has been going on for as long as there have been civilizations. We expand through conquest, wracking up moral debts along the way. Nice people farm on land that was stolen by their ancestors. This kind of sin is everywhere, all of it more than any one person can ever pay back. [1] https://www.oecd-ilibrary.org/sites/fc2b28b3-en/index.html?itemId=/content/component/fc2b28b3-en [2] Bob Joseph, 21 Things You May Not Know About the Indian Act, (Indigenous Relations Press: Port Coquitlam, 2018,) 47.

In purely secular terms, we are all living with moral debts that are too great to pay. In religious terms, that is called sin. On Good Friday, we are told that the world was so soaked in sin that humanity had no way to ever solve the problem. We could not redeem ourselves through our own power. We could never adequately pay back for all the land we had stolen, all the murders and wars fought in our name, for all the stolen land we live on. We personally do not have enough resources in money or even our bodies to ever make good on this collective mountain of mistakes and deliberate acts of theft and cruelty done on our behalf.

But God does not want us to simply ignore this, or to be paralyzed by it. So, God offers another way. God agrees to become a human being. An innocent human being. An innocent human being who is willing to be punished for something He did not do. As Christ, God offers to pay the full debt of humanity. Our moral debt is not just to the people our civilization harmed, but also to God, as the maker of the land that has been stolen, polluted, every life that been taken or beaten. And on Good Friday, God, the only one who can afford to pay the debt, takes it on, and pays it. By being punished on our behalf, on the cross. We couldn’t absolve ourselves, but God could. And God did.

By taking on all that moral debt, we are given a gift – a new life. By going up on that cross, Jesus says, I know that you have sinned. You have hurt each other. I will pay that price on your behalf, so you can be lifted of the burden that paralyzes you. With the gift of Christ’s sacrifice, people can know that they are forgiven. We recognize that we have sinned more than we can pay, but Christ lifts that burden from us so we can live another day, sharing the love that Christ has given us. So, we can try to end racism in ourselves and in our society. So, we can feed the hungry, help the poor and homeless, work to end domestic abuse. And we can do this, in our homes and in our city, because we no longer feel paralyzed by the scale of our moral debts. This doesn’t mean we can walk away from our obligations to others, like Indigenous peoples and other people we have harmed. But with Christ’s self sacrifice on the cross, we can face our identity as people who have sinned and have been offered a life saving love anyway. Each of us is given a second chance by Christ’s death on the cross.

So, on this Good Friday, let us be like people whose debts have been wiped out. We have a chance to live ethically, lovingly and justly. Christ went to that cross as an innocent man, so we can regain our innocence. It is a gift none of us deserve – and this is why it is the greatest gift of all.

Toronto Purchase: we did buy Toronto lands for 10 shillings. http://mncfn.ca/torontopurchase/ Check with Special Places book, which tells a different story. Mississauga question the legality of the treaty.   Indigenous people own only .5% of the land below the Arctic Circle, despite that is where 95% of them live. Overall, including above the 60th parallel, they own 6.9% of Canada’s land mass. https://www.oecd-ilibrary.org/sites/fc2b28b3-en/index.html?itemId=/content/component/fc2b28b3-en