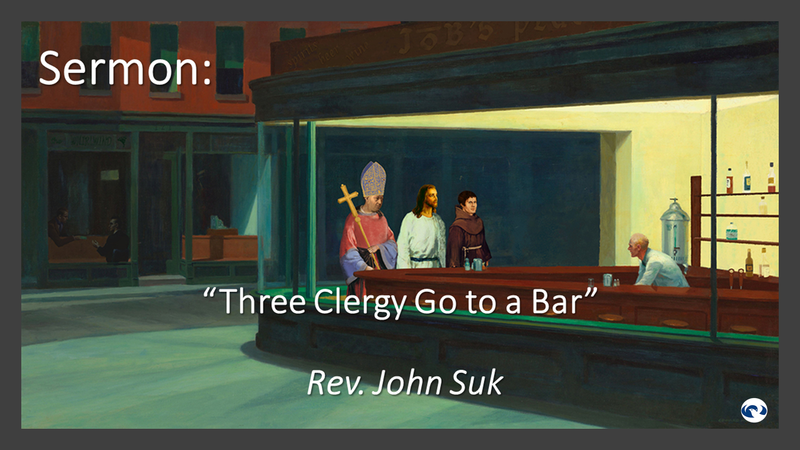 After the crucifixion, Cleopas and a friend left Jerusalem and made a run for it, much like we might make a run to the cottage after the funeral of a friend. They were on the road to Emmaus because they wanted to get seven miles and a lifetime away from the grief of Golgotha.

On the way Cleopas and his friend met a stranger who talked a lot. The stranger explained why he thought Jesus had to die, especially if Jesus was the Messiah. Anyway, the stranger talked like that right up to dinnertime—as in this painting by Spanish artist Maximino Barredo. And then, says Luke, while the stranger prayed for a blessing over the meal, “they recognized him; and he vanished from their sight.” What do we make of this story? What really happened on Easter?

Well, it’s like this. Once upon a time three good friends—a Catholic priest, a United Church minister, and a Jewish rabbi—met at a pub. They liked to get together to talk theology.

The topic for the day was, “Jesus’ resurrection.”

The priest began. “I like my resurrection plain and simple. Just like my “Blue,” here. The straight goods. Low in the grave he lay, but then Jesus’ wounds close up, his heart starts ticking again, he shoves one leg first, and then the other over the ledge he’s lying on, he steps down, and up from the grave he arose, he arose!”

“No, no, no” said the United Church minister, a teetotaller. “It has to be much more complicated than that. Like my virgin cocktail. This La Bohème Noir is made of lavender-infused honey, elderflower cordial, and black pekoe tea. It has a spicy, pungent aroma. The resurrection is like that, complicated but lovely. Sweet. Me? I think people saw visions. They saw Jesus walk through solid walls and disappear with the breaking of the bread. Of course, no real ‘body,’ could do such things, just as no aroma can be cut with a fork and knife. Still, I think God was in it somehow.”

So finally, the Jewish rabbi got her turn. She said, “Well, I certainly don’t believe Jesus rose from the grave. And if there were people who saw visions of Jesus after his death, I’d say that sounds more like post-traumatic-stress-induced hysteria than a god-thing. The resurrection stories are probably an invention of the early church—even many Christian scholars think so. No, just as this red wine will soon give me a headache, the judgement of history is that Jesus and his followers have mostly been one long migraine for Jews, and Jesus’ death an excuse to scapegoat and persecute us.”

And while this didn’t change the priest’s and or the minister’s mind about what actually happened at the resurrection, they both nodded their heads in somber, sober agreement.

How do you take our resurrection? Straight up, like the priest? As a complicated but sweet mix of visions and God, like the minister? Or as the occasion for great pain, like the rabbi’s red wine?

Well, this is what I think. We will never resolve the argument about what “exactly” happened at Easter. How could we? Too much time has passed. Luke was not an eye witness, and wrote fifty or sixty years after the events he tells of. But now, it is nearly 2,000 years later. No physical evidence. No DNA. Not even a crack Miami CSI team could recreate the events surrounding Jesus’ resurrection 2000 years later. And, what’s more, with so little hard evidence, I really doubt that it matters to God whether or not any of us get the bare facts of the resurrection right.

For, if it really did matter to God that we get resurrection facts exactly right, surely God could have done a lot better than giving us the four contradictory accounts of the resurrection that we find in the Bible. If it really mattered to God that we get the facts of the resurrection exactly right, as if these facts were the answers to a cosmic math or science quiz that we need to pass to advance, God could have moved the stars around in the heavens and spelled it all out for us with his or her finger, so that there was no mistaking the truth. But God didn’t do any of these things. We have nothing but these complicated, mysterious, lovely twice- or thrice-told tales found in scripture.

So, what, then—what is the real point of Easter, if it isn’t making sure that we get the facts exactly right? Well, I can think of a few possibilities. But this morning I want to focus on just one of them. Repentance.

You see, the story of the walk to Emmaus has this lovely turn in it. Cleopas and his friend were running away from Jerusalem, but their vision or encounter or whatever it was turned them on their heels. Luke says, “That same hour they got up and returned to Jerusalem.”

Cleopas and his friend changed direction. They were headed north, seven miles to Emmaus, but after supper they slammed on their brakes, reversed, and headed south, straight back to Jerusalem. Like a driver who turns his car the wrong way into a one-way street does a quick 180. That’s repentance.

Repentance. Remember the priest I told you about earlier in the sermon? He knew all about repentance. When he graduated from seminary and got to his first parish, he came as a snotty, self-absorbed, pie-in-sky rookie, all books and no common sense. But a wise parishioner saw that there was more to the young priest than this protective shell, and so he took him to a pub to talk about real life, every week, over a Blue, for four years, until the priest finally figured out his job was not about parsing Greek verbs but about loving his sheep. The priest turned it around, reversed direction, did a new thing, turned the page. He repented.

And remember the United Church minister I told you about? Well she knew all about repentance too. Alcoholism destroyed her marriage, her friendships, and her self-esteem all before she was thirty. But after she hit rock bottom, she turned it around. With the help of AA friends she changed direction. Along the way, she learned how to love virgin cocktails and discovered spirituality. Went to seminary. Became a minister. Reversed her downward spiral and started over.

Repentance. Remember the Jewish rabbi? I don’t know much more about her except this. After going home from the pub with a splitting headache, she repented of ever drinking red wine again.

Easter is many things. But among them there is also this invitation to each of us to join Cleopas and turn our lives—or maybe just parts of our lives—around. This sort of repentance doesn’t have to be a remorseful, dark, depressing fight with guilt or depravity—though God knows, sometimes this sort of tragic struggle may also be necessary. Mostly, by repentance I mean repentance as Cleopas experienced it, repentance as hop-skip-jumping joy all the way to Jerusalem, as in the third frame of this tryptich, because whatever happened to Jesus, exactly, Jesus’ hope, his teachings, his example, his priorities all burned inside of Cleopas, transforming him from a refugee with his tail between his legs into someone who is going to seize life and live it the way it was meant to be lived.

Repentance. The Greek word literally means “changing your mind.” Turning it around. Big things or small. Your relations at work. Your commitment to the planet. Your ability to say, “I’m sorry.” Your exercise routine. Your perspective on poverty or race or the pesky neighbour who won’t mow her lawn.

Change it up. Your reasons for voting for the candidate you do. Your focus on “me, myself, and I.” Turn it around. Your exercise routine. Your volunteering. Your generosity. The way you treat your house keeper or the guy who empties trash at the club. Your charitable giving.

Turning one thing, or everything, around. One of the great joys of Easter is that it celebrates how today is a day we can repent, turn things around, and go hop, skip, jumping into the rest of our lives—whatever really happened 2,000 years ago.