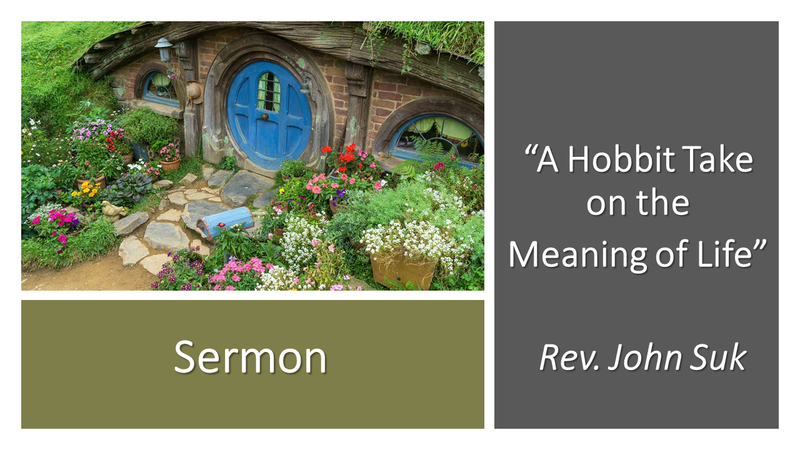 Soon after the destruction of the one ring—which you can read about in Tolkien’s Lord of the Rings—Middle Earth’s new king, Aragorn, made it known that he wanted to visit The Hobbits of The Shire. It was to be a victory tour. So, Sam Gamgee, mayor of Hobbiton, the largest village in The Shire, proclaimed a feast.

There would be fireworks. There would be pie eating contests. There would be excellent pipe weed on the house. Best of all, there would be food: tables full of meat and potatoes, red wine and bread, as much as any hobbit could eat or drink—which was to say, quite a bit. All because King Aragorn and his Hobbit friends had won a great victory.

Anyway, Mayor Samwise Gamgee—a hobbit, who with Frodo had played a large role in the victory over evil Sauron himself—Sam Gamgee proclaimed the feast. There was only one problem. A big problem. King Aragorn wanted the hobbits to invite humans from the village of Bree to join them.

So, said King Aragorn, hobbits and humans should nevermore live-in suspicion of each other. No, said Aragorn, hobbits and humans should comfort each other; they should speak tenderly in each other’s villages and proclaim that their hard service had been completed and that the dark cloud of Sauron had been lifted. Henceforth humans and hobbits should deal with each other justly and walk humbly together in obedience to King Aragorn.

So, Sam Gamgee proclaimed the feast. Everyone in the Shire would be there. And humans who lived in Bree would be invited. The only problem was that no hobbit in all the Shire dared be an ambassador to Bree.   Hobbits go to Bree? No way! Hobbits were afraid. Bree, after all, was not even in the Shire! Bree was over the Brandywine River, beyond the East Farthing and Buckland, way on the other side of the High Hay Hedge, beyond the old forest—Bree was in the world maybe, but certainly not anywhere near Hobbiton in the Shire.

You see, most hobbits were born cowards—Sam and Frodo, Merry and Pippin being notable exceptions who proved the rule. When it came to adventure nearly every Hobbit wanted nothing doing. Hobbits were for Hobbit holes. So, even though the Hobbits loved King Aragorn, not one was found to take to highways or byways to make an appeal on Aragorn’s behalf— “come to the feast, you humans of Bree, and be reconciled to hobbits.”

Not one. After all, going to Bree would require living large. Going to Bree would require walking on water—or at least over it, on a bridge and out of the Shire. Going to Bree as an ambassador for King Aragorn would mean taking a—however miniscule—risk. So, who was Mayor Sam Gamgee to send to Bree? Send you, perhaps, to Bree? Could you, as a member of Lawrence Park Community Church, be an ambassador to humans beyond our comfort zone?

I mean, how many people do you know that are “Mister” or “Madame Ambassador?”

In all our Shire, Canada, only about two hundred people, like Kevin Vickers, one of the heroes who ended the parliament hill shootings in 2014, are so honored. Being an ambassador, like Vickers later was to Ireland, is a big deal. In fact, if I think about it, I personally knew one recently deceased American congressman, and a few Canadian MPPs and MPs. I have sat down for a cup of coffee with Amway’s Richard DeVos once, too. He told me about how, just hours before, he had tea at the White House with George Bush and his mother Barbara. I even know three people who once shook hands with Pope John Paul. But you know, I have never met a real flesh and blood ambassador!

Now, I need to stop here for a moment before my excitement carries me away. I understand that the way I just described God, using Biblical language and allusions, is a bit much for some of us. We recognize that such language about God is metaphorical, and that whoever and whatever God really is, God is not a white-haired King sitting on a throne.

Still, close to the heart of the gospel is this idea that whoever or whatever, exactly, God is, what God hopes and dreams for us is that we will make this world a garden of shalom, that we will, on his or her behalf, be compassionate and gracious, abounding in love and faithfulness, that we will be God’s ambassadors.

So, whether you’re in your hobbit hole or at church; whether you are taking a break at work or sitting down for a cold one at the nineteenth hole with some golf buddies; whether you are making a big energy purchase for your industrial conglomerate or merely recycling CD batteries—in each case, we are ambassadors of reconciliation. As an ambassador, we are not to be hobbled by an earthly point of view, says Paul, but we are new creations. We are people who can put hobbit cowardice and fear behind and be ready and eager to live large—even when it is scary to do so.

It is through listening to the Word, after all, that we come to know Jesus and love his way, even though we have not personally seen his wounds. It is through the Word that the Spirit grabs our heart and bends our wills, even though we never felt Pentecost flames of fire on our heads.

And then with the Word lit within us, we can speak our own words after wherever we find ourselves. Using words, we can urge our government to address homelessness and addiction and systemic racism. Using our words, we can urge our employers to consider Greener policies and fair wages. Using words, we can warn the world, as the White Wizard Isaiah did, long ago, that it is folly to put our trust in horses and chariots, and—as with Hobbits, it is folly to spend all our time chasing after worldly goods and comforts rather than justice and peace for our neighbor. Only words—words confirmed by our own private actions and lifestyles—only words can convince our neighbors that there is an ironclad law of God written into the very structure of Middle Earth—and that is that grace wins.

But back to the Shire and the conclusion of my story about the visit of King Aragorn. As I said, no hobbit could be found who would go to Bree as King Aragorn’s ambassador of good tidings. So finally, in desperation, Mayor Samwise Gamgee asked the only hobbit he could even imagine might be willing to go. Sam asked a little hobbit woman, Annie Agon to go.

Now, you do not know Annie Agon, because she does not show up in any of the Lord of the Ring books. But she has both Took and Brandybuck relations so you can be sure Annie was not your typical shy, retiring hobbit. She was a character.

Anyway, Sam said to her, “Annie, I know other people think you are strange, living on the other side of the High Hay Hedge like you do. Annie, I know that people think you are a fool, because you do not smoke or nap, but you do diet—so unhobbit-like. I know that people think lowly of you because you are brave enough to test the Brandywine River for a swim. Hobbits tell me that you have even been known to invite visiting human rangers into your hobbit hole for tea and crumpets.

So, Samwise Gamgee said, Annie Agon, I think you are just the hobbit to be an ambassador to Bree and invite those humans here: invite them to our great feast. Being Aragorn’s ambassador does not mean that you are going to change Shire history all by yourself or make trolls and ogres shake in fear. But you have the Aragorn’s word! You have good news! Go! Invite them in!”

And then what was Annie Agon to do? Rise to the occasion, deliver the good news and have an adventure? Invite those humans in Bree to the feast?   Or for that matter, what are we to do? Mind our own business? Go along with the rest of the Hobbits to get along? Or make our lives’ work living and speaking the good news that evil can be overcome and we can, inch by inch, change the world?

What shall we do? After all, the people of Toronto are waiting.