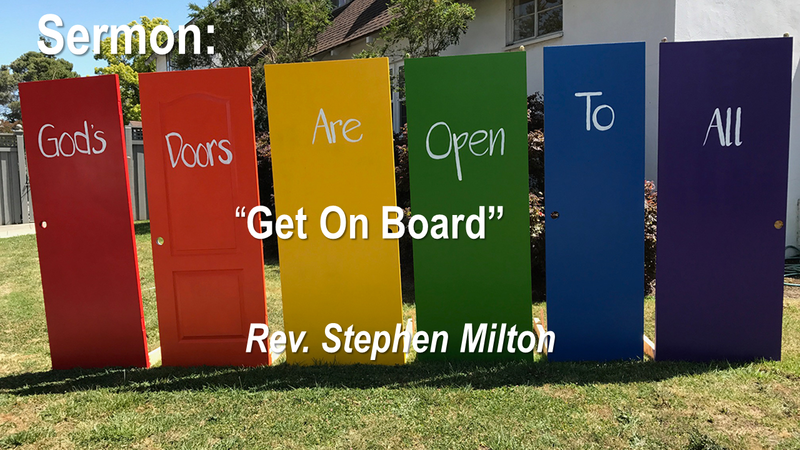 Who can be a member of the Christian community?

That’s the question that was in the air when the events of today’s scripture reading took place. The passage that Meda read is from the Book of acts. It is kind of like a sequel to the gospel of Luke. It’s the story of what the apostles did after the resurrected Jesus went back to be with God in heaven.

That raised an obvious question – if the faith was to grow, who could become a member? It was pretty clear that Jesus wanted his message to spread beyond the people who had met him in the flesh. But that left many questions. Was this a faith only for Jews, or could Gentiles join? Some prophecies had predicted this faith would extend to the ends of the Earth, but that seemed pretty unlikely. So, they started small – Phillip went to the region next door, to Samaria, to spread the good news.

In church life, we are always faced with two agendas. The first one is created by us humans. We get together in councils, draw up a plan of action, and then try to carry it out. The other agenda belongs to God. God’s plans for us are sometimes very different from our plan, and these divine ideas are often strange and seemingly impossible. However, if we can rise to the occasion, and put our plans aside, things go much better when we follow God’s agenda.

That’s what happens in today’s story. Phillip is converting people in Samaria when a messenger from God tells him to head south, to the road between Gaza and Jerusalem.

Phillip knows that if an angel tells you to do something, you don’t ask questions, you just trust in God. So, he walks for a couple of days until he reaches the road.

Phillip has no idea why he is here. And things just get stranger when he sees a carriage trundling along the road. Based on what we learn a bit later, we can assume that this was an expensive carriage, with room for at least four people. It may have also looked like it was from a distant land. It exudes wealth. Its presence on this road is strange enough, and then a voice in Phillip’s head tells him to run up alongside.

What happens next may be easier to understand if we put it in modern terms. Imagine that a stretch limo is driving slowly down a road. You’re Phillip. You’re dirty and dusty from walking for a few days. Nonetheless, you jog up to this limo, keeping pace with it. You can hear scripture being read from the inside, perhaps an audio book being played really loud. You knock on the window. It rolls down. Inside, you see a very richly dressed treasurer of an African nation, with his driver and assistants. The occupants of the car have every reason to wonder if you are a security threat, or a beggar, or just someone with no manners at all. And then comes the kicker, you have the temerity to ask, “Do you understand what you’re reading?”

The person inside the limo works for the Queen of his African nation. He controls the treasury of a country known for its gold and silver mines. He is one of the most powerful people in his country. He has every reason to have his security detail make you go away. But instead, he says to you “ How can I understand unless someone helps me?” So, he asks Phillip to come on board and teach him. It is a bizarre chain of events that only God could arrange.

But who is this person?  In the first century if someone was called an Ethiopian, it meant they were a dark skinned person, from the extreme southern ends of the Earth. You couldn’t get further away – that was what was meant by being Ethiopian. Scholars think this court official came from the kingdom of Meroe, which was in what is now northern Sudan. He has come to worship at the temple in Jerusalem.

But there’s a catch. This man is a eunuch. Where he comes from, the  King was considered a god, so the administration of the nation was carried out by the Queen. To prevent bloodline problems, royal courtiers who worked with the Queen were eunuchs. So, the treasurer who Phillip meets is a eunuch, who also loves the God of the Hebrews. But this man’s castration means that he would never be considered a full Jew. Like the lame and blind people Christ encountered in Israel, he was shunned for what was considered a physical deformity. He would never be allowed into the inner courts of the temple where Jewish cisgender men worshipped. But despite all this, he had come 2500 kilometers  to worship in the outer courts of the temple, drawn by the one God, who he is reading about in the prophecy of Isaiah.

There were many, many people who were converted into the faith in these early days of Christianity. The Bible writers could have chosen any one of those stories to place into the Book of Acts. But instead, this is the first story of an outsider being brought into the faith. An angel and the holy spirit tell Phillip, talk to this person. This person in the rich, foreign carriage, this is the answer to your question of who can be a member.

And lastly, this person is fabulously wealthy. True, God says, but what really matters is humility. The treasurer does not order dusty Phillip around, but asks for his help in understanding the scripture. This Ethiopian court official ASKS whether he can be baptized, he does not command it. And, in addition to his humility, he is curious. He does not already know everything about Christianity. He has many questions, and he will have more. He wants to learn more, to be with others who can help him understand more about the faith. Those qualities, curiosity and humility, are far more important than any power or wealth this traveller may possess.

And so, this is the person God wants to be the first non-Israelite convert. Someone who is : wealthy -  humble – curious – a stranger  - dark-skinned- gender non-conforming - differently abled -  . This person is the answer to the question of who can be a member in a Christian church. Everyone is eligible, no category of person will be excluded. All they need is to be baptized, and to feel drawn towards God. They need to be imbued not with certainty, but a flexible curiosity, with a desire to learn, to share, and  to help others.