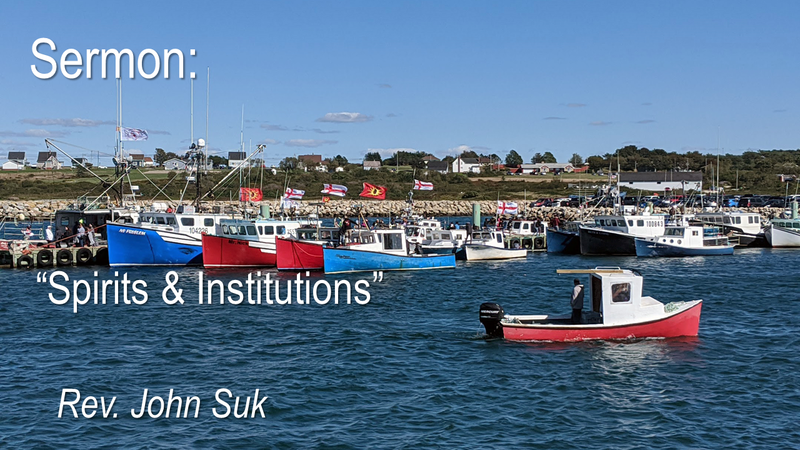 You will understand that as much as I was excited to preach this sermon, today, there are parts of it that don’t seem to fit well with the sadness we feel on account of Mark’s death. So, last night I reworked the sermon, and today, before I get to the end of this message, I will also reflect on Mark’s death and our grief. But first, the context—Pentecost.

So, watch, with me, this video by Jefferson Bethke. You should be able to follow it, but I’ll pull out some key phrases and project them, at the end, in case you didn’t make out all the words.

Here is a representative sample of what Bethke says:

Now back to the point, one thing is vital to mention
How Jesus and religion are on opposite spectrum
See one’s the work of God, but one’s a man-made invention
See one is the cure, but the other’s the infection
See because religion says do, Jesus says done
Religion says slave, Jesus says son
Religion puts you in bondage, while Jesus sets you free

Bethke draws a stark contrast between spirituality—which he thinks is always good—and religion, which he critiques mercilessly.

For Bethke, religion is just bad. Religion today, for Bethke, is all hullabaloo, hucksterism, and hypocrisy. We know that Jesus had some problems with religion, too. For example, one day he walked into the temple, and upset all the merchant and money changer tables there, as in this image and as described in our scripture reading for today.

So far, religion doesn’t sound so nice. Might private spirituality be preferable?

Of course, it isn’t that simple. We need a more nuanced view of the relationship between spirituality and religion than Bethke provides. It just isn’t all one or the other.

It certainly wasn’t so for Jesus. For example, even though Jesus overturned the tables of the merchants and money changers once, nowhere in the gospels does Jesus ever condemn temple religion. And, as far as buildings go, Jesus seems to love the temple, even though it was built by Herod, a murderous and only half-Jewish puppet king of the Romans.

In fact, throughout his life, Jesus often visited religious institutions like synagogues and the temple. He may have preached his best-known sermon on a mount, in nature and all that, but he also went to the brick and mortar synagogue in Nazareth, where he read Isaiah and then told the crowd that, “The Spirit of the Lord is upon me to bring good news to the poor and to proclaim the year of the Lord’s favor.”

This last is a Pentecost text if there ever was one—spoken from within the institution and before the clergy and people in their pews. And our scripture reading for today concludes with a note that Jesus taught in the temple every day. Jesus was happy to make use of the religious institutions of his day—even though he did not always agree with the leaders of or practices in those institutions.

So then, what is the right relationship between spirituality and religion, if religion is not to be completely denigrated? I think a Bruce Cockburn anthem offers us insight on this question. For years, I ran the first line of this song my computer’s screen saver—these words:

All the diamonds in this world
That mean anything to me
Are conjured up by wind & sunlight
Sparkling on the sea.

I’m not sure what, exactly, this means. But at the very least, it suggests that some of the most valuable and beautiful things in this world can be found in nature. Cockburn is singing here for people who find spiritual life in the forests and on the lake shore.

In the next few lines, however, this sailor seems to get tired of sparkling sea spirituality. It’s not enough. So, he lands in a human-built harbor town looking for something more. Maybe a bar. Maybe he’s looking for trouble, or a new suit of clothes, or a wife. Who knows. But he runs aground in the harbor town. Only to leave soon after. Cockburn says:

And at the end of his song, the ship image returns:

In this song, the ship image is central. As Bruce Cockburn well knows, from the beginning of Christianity’s history, ever since Christians told the story of Jesus sitting in a storm-tossed boat in the middle of the raging sea, when he commanded the wind and the waves to be still, Christians have thought of the ship as being a symbol for the church, as in this orthodox painting.

So, when Cockburn sings about a gull-chased ship carrying him to sea, he is probably thinking of the church as an institution that can be a wonderful alternative to disappointments of harbor towns. At the end of the song, Cockburn adds that the ship is “His” ship, that is “Jesus’ ship,” and alludes to Jesus by using the universal image for Jesus, the image of a fish, that he sees from the ship.

Now, the first thing Cockburn thinks about once he’s out of that harbor town, and on his ship, is prayer. Remember, in our text, Jesus says that the temple ought to be a place of prayer. So, in his ship, the church, Cockburn sings:

Two thousand years and half a world away
Dying trees still grow greener when you pray.”

The bottom line? Cockburn is suggesting, I think, that we need church as a public institution, we need its sails and keels and bricks and organ pipes, we need religion—along with a spiritual sparkling sea and all that—we need both to find Jesus and worship him.

So, while Bethke raps, “See spirituality is the cure, but religion is the infection,” Bruce Cockburn offers a wiser picture of the relationship between religion and spirituality. We need both.

The analogy I like best is that of infrastructure.

Imagine Toronto without paved roads but lots of people. Imagine North York or Lawrence Park without sewers or water mains, but lots residents. Imagine your home without a foundation or furnace or plumbing but lots of kids. It wouldn’t work very well, would it?

Or, imagine our church without this grand piano or a sun-kissed sanctuary or the wires and tech that make Zoom possible. Imagine Lawrence Park Community Church these past thirty years without staff like Mark Toews, ministers and administrative staff, teachers and choirs and maintenance people.

The truth is, we need the church infrastructure—sewers, buildings, staff, and organs—we need structure if we’re going to have safe places to love each other. We need infrastructure to flourish.

I’m so sad that Mark has passed away. My sorrow takes the shine off Pentecost. I have no easy answers, no trite explanations that will assuage our mourning. Death is an enemy and Mark’s passing leaves a hole in our souls. But our mourning has a context—religion: the religion that has brought us together today; the religion that Mark has played and sung to us for nearly thirty years. We need comfort only because religion has made us a family in this place of bricks and mortar.