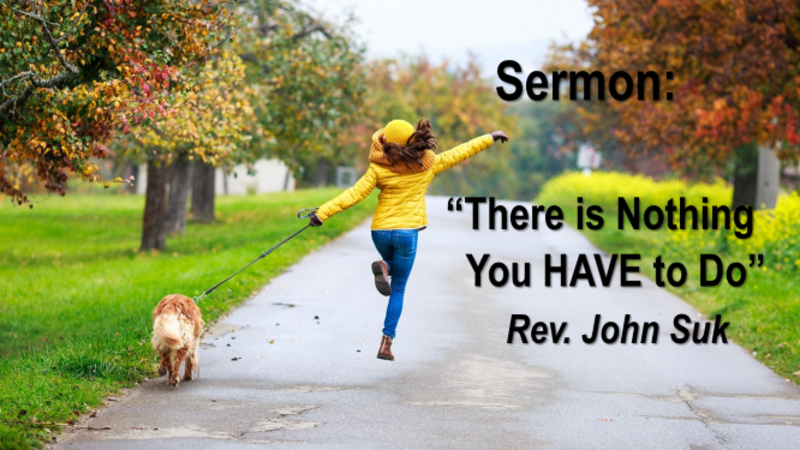 Here’s a cartoon, a nice cartoon. It’s good for you. Watch it. I insist. Watch carefully. Pay attention. Now. You must.

Ah, nagging. It’s so human, impossible to avoid. As in this Shel Silverstein poem.

Oh yes. United Church ministers do it too and do it better. We’ll nag you today and tomorrow and the day after tomorrow. Nag. Nag. Nag.

We ministers get our nag reflex honestly. The Bible, after all, is full of nagging, from the Ten Commandments to the Sermon on the Mount and much between.

Remember the sabbath day. Honor your father and mother. Do not kill. Do not covet. Do not bear false witness. Even this, “Do not boil a kid in its mother’s milk,” and so on, and Jesus adds:   ·

Don’t be angry. ·
Don’t look at another person lustfully, or you will have committed adultery. ·
Don’t seek an eye for an eye, but turn the other cheek. ·
Do not worry. ·
Give the coat off of your back. ·
Pray. Forgive. Seek first the kingdom. ·
Be perfect as your heavenly father is perfect.

Nag, nag, nag. We ministers are pros. “Be good. Be light and salt. Be ambassadors of reconciliation. Do social justice. Save the environment. Fight Israeli occupation of Palestine. Reconcile with the First Nations. Be affirming. Support our budget. Volunteer. Struggle against racism. Seek economic equality.” Nag, nag, nag . . .

It’s not that any of these suggestions are bad. That’s worth saying and emphasizing. Especially after a week like this past one, we’re all sitting here a bit overwhelmed, dazed, really, by the news out of Kamloops. Unmarked graves of hundreds of children were found there. They died at that residential school while the powers that be tried to erase what they considered to be the stain of first nations language and culture from Canada.

The trouble with all this nagging is that besides not being fun to listen to, it shrinks the Christian life to a legalistic code, a list of do’s and don’ts isolated from the good news and consolations of the gospel that are supposed to fortify and inspire our action. When I constantly nag, then you begin feeling like you will never get it quite right and will never quite measure up. Which makes church depressing. My pulpit nagging you takes the fun and laughter out of your Christian life.

In the Bible, Jesus condemns the Pharisees for a similar approach to faith. This is interesting and instructive for us liberal United Church types. You see, what the liberal United Church of Canada is to Evangelical and Fundamentalist Christians in Canada, liberal Pharisees of Jesus’ day were to conservative Essenes and Sadducees and priests then.

The Pharisees were liberals who had a flair for theological innovation. They helped introduce the idea of heaven and hell to the Jewish religion, even though you won’t find that teaching in what we call the Old Testament. At the time the gospels were written, after the destruction of Jerusalem by Roman armies, the Pharisees kept Judaism alive by turning it upside down, away from the temple and building up the synagogue as the centre of Jewish community. They also emphasized literacy and Talmudic study as a way to keep Judaism going. They even tried to make converts of non-Jews. And, instead of temple worship, Pharisees stressed the importance of keeping exactly 613 Old Testament laws as the way to define Judaism as something unique and precious.

There were laws about how far you could walk on the Sabbath, what sort of clothes you should wear, how to provide for the poor, how to treat strangers, and on and on—so much so, in fact, that the Pharisees pretty much ended up writing off the common countryside Jews because keeping all of these 613 laws was just too hard for common Jews. The Pharisees called these good, but non-observant Jews, “people of the land,” which pretty much translates into English as “country bumpkins.” They were everyday people who didn’t have the time and the education or the resources or the education to do everything that was demanded by Pharisees speaking from their synagogue pulpits or in the classrooms.

And it was this that offended Jesus about the Pharisees. He didn’t believe in religion with demands so onerous that you couldn’t do everything that is required of you. So, Jesus said, "The teachers of the law and the Pharisees sit in Moses' seat.  So, you must obey them and do everything they tell you. But do not do what they do, for they do not practice what they preach. They tie up heavy loads and put them on your shoulders—that’s work righteousness—but they themselves are not willing to lift a finger to move them,” that is, to share the load.

Which brings us to today’s text, where Jesus offers a kinder, gentler alternative to pulpit nagging. He says, “Come to me, all you that are weary and are carrying heavy burdens, and I will give you rest. Take my yoke upon you, and learn from me; for I am gentle and humble in heart, and you will find rest for your souls. For my yoke is easy, and my burden is light.”

A yoke was a strong piece of wood which lay over the shoulders of two oxen in such a way that when the oxen walked forward, pulling the heavy plow, their shoulders pushed together against the yoke.

So, when Jesus says, "Come to me, all you who are weary and burdened and I will give you rest. Take my yoke upon you . . ." Jesus means his teachings and his attitude will pull for us when we can’t. When it comes to the obligations of religion, Jesus is saying, “don’t sweat it. I’m pulling for you. If you can’t pull a full load, it’s covered.”

So, how is it that Jesus can carry our “you have to do this, you have to do that,” load? The answer, here, is something of a mystery that’s wrapped up in the lovely Christian word, “grace.” Grace is God’s divine acceptance of us, even though we’re not sure what to make of God and even though we’re not very good at returning God’s embrace or even doing everything the minister would like us to do.

And this amazing grace for failed Jews and even for gentiles, like us, was so unexpected, so refreshing, so life giving that it inspired those Jews, in turn, to do the right thing, to turn their lives around, to be like Jesus—even though they were not nagged to do so. Grace inspires gratitude; and gratitude inspires doing the right thing much more efficiently than nagging.

So, in conclusion, I invite you to take all the nagging I have done these past nine years—or that ministers like Stephen will do in the future—I invite you to take all such nagging with a grain of salt. Of course, we nag. Nagging is an occupational hazard for moms and dads with little kids at the supper table and for ministers like me in the pulpit.

After all, and especially after a wretched week of news like the one we’ve just lived through, there is obviously a lot of work that still has to be done to make the world everything we dream it could be. So, frail desperate, angry humans that we are, we nag.

Just remember, though. Jesus has already shown us what is good. He has demonstrated grace in that ultimately, his yoke is easy, and his burden is light.