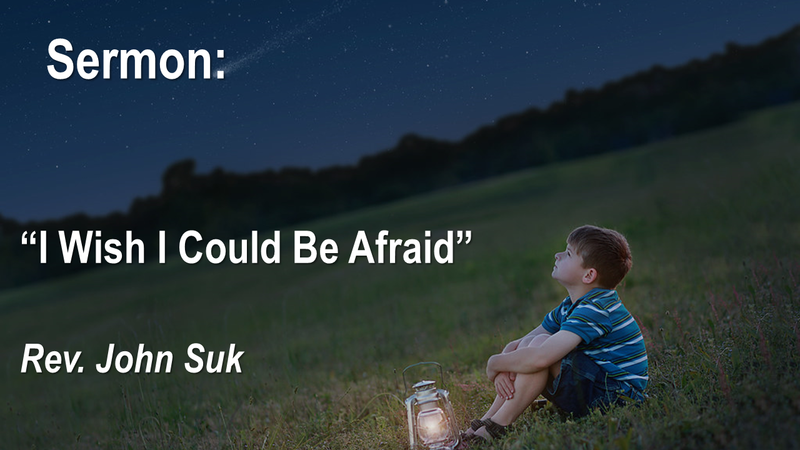 Please watch this video first as John refers to it in his sermon. “Still Haven’t Found What I’m Looking for by U2 and a gospel choir in Harlem. https://youtu.be/M8Wt3dhF4fU

I recently read Robert Kiyosaki's best-selling book Rich Dad; Poor Dad. In his book Kiyosaki describes the fear-greed problem. It goes something like this. Even though we have more money and stuff than any other people in the history of the world, Kiyosaki says we always want even more. We are greedy. So, for example, even though Joe and Sally own a perfectly adequate and cozy three-bedroom house in Bathurst Heights here in North York, what Joe and Sally really want is a beautiful stone cottage with acreage on the lake.

Trouble is, says Kiyosaki, we are also afraid. If Joe and Sally finally get that gorgeous stone cottage, they might well be fearful that circumstances will get between them and that lovely house: their business might go south, or one of them might become sick and require more care than they can afford, or maybe their kids need help to finish school.

So, we're greedy. We want more. But then we're fearful too, fearful that we might lose what we have. We try to save for a rainy day but run up our visa cards; we buy life insurance but it’s the stock market that crashes. Greed and fear, and so, we chase our tails.

The solution to this greed/fear problem, says Kiyosaki, is to become rich. Really, really rich. Then we won't be afraid anymore. And this book—the first of many he’s written over the past twenty years—explains how to become rich.

Now, Kiyosaki might well be right about how you can become rich. Donald Trump thinks so, at least, and said: I [am] a big fan of his book, Rich Dad Poor Dad, . . . one of the most successful personal-finance books of all time. But Kiyosaki is wrong, about fear. We all know that wealth can't drive out all fear because we're afraid of other things, too.

We're afraid of losing our health, and not all the money in the world can cure some diseases, as we have learned to our great grief over the past few weeks. Or we might be afraid of failing the final exam we have to take, and not all the money in the world can substitute for good notes, reading all the assignments, and hours of study. So, as nice as having a lot of money is, it clearly can't really drive out all fear. What does? You are probably thinking, "Jesus!" This is a church, after all, and in our text Jesus even says, "Do not be afraid."

Well, I might say something about that line of thought before the end of this message. So if that is what you're thinking, hang in there. This morning, though, I want to say something different about Jesus’ words. Something you probably didn't expect.

I wish I could be afraid. Not the kind of fear Kiyosaki's book is all about. But I wish I could be afraid like Peter was, after he inexplicably hauled all those fish in, stepped out of the boat, and looked up -- slack jawed and terrified into the face of Jesus. Peter's fear makes sense to me. In Luke four we read that just when crowds of people were starting to follow Jesus all over Galilee, Peter was actually one of the lucky few who was getting to know Jesus, personally. Jesus visited Peter's house. While there Luke says Jesus healed Peter's mother-in-law, as in this drawing from Rembrandt. Peter, naturally, was amazed. It was then, while Peter was thinking about what he had already seen and heard that Jesus told Peter to throw out his nets in the wrong place at the wrong time. In spite of that, Peter hauls in a miraculous catch of fish.

And so, by now, having seen what he’s seen and unable to explain it, Peter is awed and amazed by Jesus -- but he's scared too, more scared than he's ever been before. So the next thing he knows he's stepping out of the boat and shouting at Jesus: "Go away from me Lord, for I am a sinful man." Now, whether this is a historical report or Matthew’s somewhat exaggerated recollection of events long ago, I still wish I could be afraid like that. I wish I could feel the breath sucked out of me like Peter must have felt it on the day that he had his dawning recognition that whoever Jesus was, he was something else, something new, someone who would change the world. Of course, Peter's fear is not anything like Kiyosaki's fear -- the fear of not having enough money to get all the stuff we want. And Peter's fear isn't fear of pain, or dying, or losing a job. In fact, I'll bet Peter's fear of Jesus put all these other ones in perspective so that he'd never be afraid of those things in quite the same way again. No, Peter's fear is on a different plane altogether. No, Peter is afraid more like Mary Magdalene and Mary the mother of James, and Salome were afraid on Easter morning. Scripture says that when they discovered, the empty tomb, they ran away and said nothing to anyone, for they were afraid (Mark 16:8).

This is why. Jesus is the center of my being. I have fashioned a life out of preaching about Jesus. -- I have spent four years in intensive study of the Bible at seminary. I still pray, sometimes, in Jesus’ name. His life is my inspiration. I’ve preached his path for nine years from the LPCC pulpit.

And yet I have never laid my eyes on his face. I have not put my hands in his wounds. I have not heard him preach. He seems far, far away from the ups and downs of my everyday life. So, just once, just for a moment, I'd like to taste that mysterious, awful, painful, fear that seized Peter when he realized, that Jesus might really be a Messiah, a son of the living God.

I don't know how, exactly to say it. Even though it would be terrifying . . . I also think this would be a good fear, even if I could only hold onto it for a minute or two. A good fear -- maybe as rare and precious and holy as the longing fear two people in love have at the foot of a bed as a whole new world of intimacy and trust opens up to them. I think this fear is something as tense and tingling that those who love extreme sports look for. They want a rush, a brush with death, the exhilaration of being on the verge of losing it but knowing they will make it to the other side. Each of these fears is deeply spiritual. Each is rooted in wanting more life than a body can stand, in wanting something transcendent, something to lift us out of the numbness of the ordinary Peter was afraid. And Jesus saw that as Peter stepped out of the boat Peter couldn't actually live with that fear, right on the surface, day after day. It was paralyzing. So when Jesus sees Peter's fear, he says, with great tenderness: "Do not be afraid."

But I wish I knew what Peter felt and what Jesus' words cured.

In Kiyosaki's book about overcoming the fear of losing your stuff by getting rich, there are six steps and ten lessons. We live in a culture that has five, ten, or twelve-step answers to almost every problem. We like to be self-reliant. Independent. Pragmatic. Strong. We go to church that way too. We often go to church with an exaggerated sense of our status. We arrive figuring we have little we need to be forgiven of, because, well, we're good people—aren't we? It’s easy! We've done pretty good by Jesus—haven't we? And after all, isn't religion all about the business of grace so long as we go to church once in a while and contribute a bit to the offering plate?

But then, once here, we never see Jesus, face to face, like Peter did. And there are no books in the self-help section of the bookstore that can guide us down the path to a heavenly moment of extreme terror. What Peter had -- and the consolation Jesus immediately offered -- is something we're going to have to wait for until we like the thief on the cross, or Lazarus on his death bed we also go round the last corner, pass through the last door at the end of the hall, and actually move in with death. We hope.

Still, right now, as I conclude my ministry, I can't help but be a little jealous. Peter saw Jesus, for a moment, as not only flesh and blood, but as someone mysteriously more, perhaps even the Lord of the ocean depths and star fields. Peter had an encounter with the mysterious divine after only just meeting him. In a flash, Peter realized that all the hopes and dreams of his oppressed people, all the prayers he had made on behalf of his kids and nieces and nephews, all the frustration he had about the religious bigots who called themselves scribes and Pharisees -- everything seemed to depend on a carpenter in the middle of a career change who seemed to be his Messiah, and in whom he could see God. And it made Peter afraid. So he told Jesus to go away. But Jesus replied that everything was going to be okay. Don't be afraid. Just follow me.

And even though I’ve never heard him speak those words to me, personally, that is what I do. Even in the absence of Peter's fear. I do so, in part, because I cling to Jesus' words to Thomas, after the resurrection. Jesus said, "Because you have seen me, you have believed; blessed are those who have not seen and yet have believed." That is you and I.

I will also follow Jesus because he inspires me and the Bible tells me so and a Spirit I cannot explain embraces me, whispering: John, "Do not let your heart be troubled and do not be afraid." And yet . . . and yet along with the life-long habit of following Jesus and the pleasure of being in community with others who are on their own pilgrimages, and along with the joy, joy, joy, down in my heart I wish, just for a moment . . . I wish I could be afraid, like Peter.