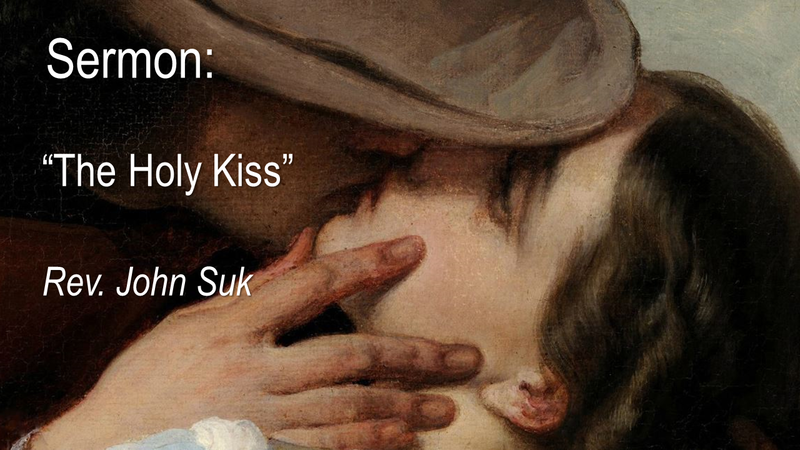 The sermon you are about to listen to is largely based on the first sermon I ever delivered at Lawrence Park Community Church, in July 2012. I remember being very nervous. Beginnings are like that.

Part of that first sermon was my recollection of even earlier beginning the months leading up to my graduation from seminary and ordination in the Christian Reformed Church. Irene and I were visiting my parents, over Christmas, in Renfrew, Ontario, where my dad was a minister.

My dad came to the ministry late. As a young immigrant to Canada from the Netherlands he didn’t have the money to go to university or seminary. But he was a self-taught scholar and a gifted speaker, and so, when he was in his mid-forties, the Christian Reformed Church decided to ordain him anyway—only the second time they had ever done so for a lay person. Anyway, here’s a picture of me, my dad, and my brother from that year, 1985.

Anyway, at the time we visited, I had only a year to go. Dad was thrilled that I would be a minister, too. Over the holidays, we spent many pleasant hours discussing my plans, church scuttlebutt, and, of course, theology.

Eventually our conversation drifted to the topic of creation and evolution. I told my father that our church had to come to grips with human evolution and that the stories of Adam and Eve and Noah were myths—disturbingly beautiful, true in a mysterious way, but not history.

My father was shocked. For him, as for most Christian Reformed people, Adam and Eve had to be historical people—the very first people. If they were not, then the Bible obviously couldn’t be trusted as being really true. So, my dad said, “if you don’t believe in Adam and Eve, how can I ever support your ordination? I don’t think I can.”

I was hurt. I didn’t know what to say. You must understand, you see, that my dad and I got along. We loved each other. We respected each other. So, his comments were completely unexpected. I was shocked.

Looking back, I see that the disagreement I had then probably reflected a growing unease I already had with Evangelical orthodoxy. And I think that my father said what he did to warn me, to protect me, if you will, from what the powers that be in the church would do to me if I went public with my doubts. I had several orthodoxy tests to pass before ordination, and the church’s elite might close the door to me if I didn’t demonstrate to them my pristine orthodoxy. They would turf me from the ministry.

It all reminds me, now, of what Kenneth Burke, my academic hero, once wrote: “Nothing can more effectively set people at odds than the demand that they think alike.”

Let me repeat those words, so that you can try to remember them: “Nothing can more effectively set people at odds than the demand that they think alike.”

As it happened, that summer, no one asked me about my views on Genesis and so I passed the orthodoxy test. At the denomination’s annual meeting in Grand Rapids, Michigan, my father voted for my ordination, even though he privately knew I was less than totally orthodox. He must have voted for me, since the decision to admit me to ministry was unanimous. Later, on my first Sunday at my first church, in Sarnia, he preached a warm sermon welcoming me to ministry. It was his final gift to me, before his untimely death, soon after. I treasure the memory.

Anyway, after that experience with my father, and after the anxiety those orthodoxy tests created for me, I’ve always searched for ways to make doctrine a playground rather than a battle ground.

Unfortunately, in the history of Christianity, doctrine has often been a divisive battleground. Even here at LPCC, we have some experience with that, due to the post-theism controversy the church was still struggling with when I arrived—or even the “no alcohol in the building” policy the church used to have fifty years ago under Rev. Bradford.

The New Testament reveals that doctrinal controversies have been with us since the beginning. Our text was taken from Paul’s letter to the Corinthians. In that letter Paul notes that (quote), "there are divisions among you." Charismatic Christians sat on one side of the church and progressives on the other. Some ate meat sacrificed to idols as if it was no big deal, and others thought it was a horrible sin. Paul complained that at the weekly Lord's Supper, "each of you goes ahead without waiting for anybody else." So, Paul agonized, "One remains hungry, another gets drunk." Some Corinthians claimed loyalty to the Apostle Paul, others to Peter, and others again to some guy named Apollos.

All the churches we read about in the New Testament, in fact, seem to have been divided by doctrine. There were multiple factions and views and many fights. And it is in this fractious situation that Paul uses one word over and over; one word he clings to as if it were his lifeline, one word which—even though it takes two to translate into English—we probably never notice when we read Paul’s writing ourselves. It sums up a priority that Paul believed could be an antidote to doctrinal discord. It is the Greek word allelous, or when translated into English, “one another.”

In Romans 14, Paul writes, “Let us therefore no longer pass judgment on one another, but resolve instead never to put a stumbling block or hindrance in the way of another.”

In chapter 15, he says, “let us live in harmony with one another.”

And in our text Paul writes, and twice besides, Paul says: “Greet one another with a holy kiss.” Which was more or less equivalent, scholars think, to our hugs and embraces.

But there is more “one another.”. So, for example, Paul writes that we Christians should:

And in other New Testament texts we read:

Allelous. One another. Paul keeps coming back to that word, as if, after Jesus, it’s one another that is constantly at the centre of his universe. As one another ought to be at the center of our universes, at least here in church.

It doesn’t matter what doctrines or practices we discuss here whether creation, evolution, the Trinity or atonement; whether post-theism or postmodernism, social justice or media buys or organ postludes—no matter what we’re saying or doing at LPCC, one of the key things that marks what we do as Christian is that we do it for “one another.” “One another” is like a key GPS coordinate that guides us to our desired communal destination—love for God first by loving our neighbour.

Which is what I’ve tried to do here for the past nine years. Jesus hoped, after all, that this practice would make the church unique. That’s why, at his last meal, he prayed, "May the church be brought to complete unity to let the world know that you sent me." He meant, whatever you do or say, do it for one another. Love one another.

Today is the last time I’ll preach at LPCC. I feel a bit of pressure to come up with some words that make a difference, that will leave a mark. It’s kind of silly, I know; a bit presumptuous of me to want to leave that sort of legacy. And yet, let me be straight. Church life, life together as a community, can be really, really good, it can be a highlight of your life and you’re making a difference in the world, if you do it together, with one another.

Anyway, I’ve loved being your minister. I’ve fallen in love with you. My only regret is that I was unable to spend more one-on-one time with each of you individually. But now my time is up. I won’t ramble on. So, rather than with another story about the beginning, in conclusion, just this:

In all things and in many ways, give “one another” a (symbolic, at least) kiss of peace. Love one another—it’s what God created us for and always hopes for.