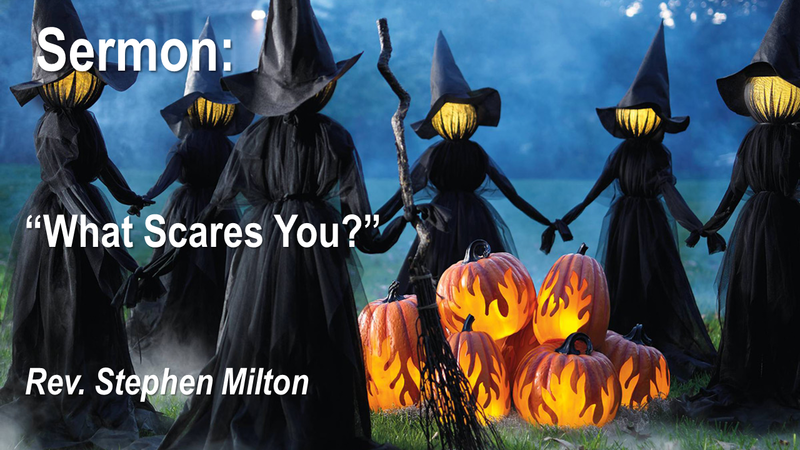 This is a special Sunday for many reasons – it is all Saints Day in the Christian calendar, and Hallowe’en in the secular calendar. I say “secular” with some reservation. Everywhere you look today there are lawns adorned with images of ghosts and dead people coming back to life. If the key to being spiritual is the presence of spirits, then this is not a secular holiday at all, but a highly spiritual one, celebrated by people of all faiths.

Now, one could reasonably object that few people really believe in ghosts, so all these inflatable ghosts that tower over the lawns are all just for fun. Fair enough. Few of us really expect to hear anything go bump in the night while we sleep tonight, or to see ghostly apparitions sliding past our bedroom door. We are like the Sadducees in today’s scripture reading. They don’t believe in anyone being resurrected after death, so they give Jesus a brain teaser to show how ridiculous the whole idea is. They are skeptics about the afterlife Jesus is proposing, like most people are now skeptics about ghosts.

But it wasn’t always this way. Historians tell us that many centuries ago, ancient Celts and other cultures believed that on New year’s Eve, the spirits of everyone who died  that year would come back to visit their loved ones. These visits could be scary, and cause some harm. Small sacrifices of food and drink were left on the front step to feed the spirits while the living went to huddle around bonfires with their neighbours. They also carried out lanterns made of turnips with scary faces meant to ward off the spirits. They waited until dawn to return to their houses, when the coast was clear. The Celtic new year was on November 1st, so this is considered one of the origins of what we now call Hallowe’en. [1]

Today we don’t believe in ghosts visiting our houses and apartments at night. Among the children, Hallowe’en appears to have lost its association with fear. Most of them come dressed for a costume ball. Tonight, they will arrive as heroes from cartoons and video games, princesses and ninjas. There will likely be some monsters among them, but few will be dressed in a way meant to terrify. They just want to pretend to be someone else so they can get some candy. Few, if any ,will have any tricks in mind that they might play on cranky neighbours. They are not at all like the ghosts of old who would haunt and terrify the homes they visited.

It’s the adults who decorate their homes who seem more interested in fear. All over the city, people have adorned their lawns and doorsteps with spooky symbols. The choice of fearful objects is interesting. It doesn’t reflect the real fears the children have. With the world environmental meeting COP 26 starting today in Glasgow, this would have been a great time to adorn lawns with melting glaciers and wildfires. That’s what is really scary right now, but the adults who are in charge of lawn decorations don’t seem as concerned as the children about that. That could explain part of the climate change problem.

Instead, the adults have filled the yards with a more personal kind of fear.

All over the city, lawns are adorned with skeletons that reach out for the living, and with ghosts that seem eager to assault anyone who walks by. The fears of yesteryear, the witches and monsters, don’t play as a big a role now. Mostly, judging by what I have seen in this neighbourhood and others, what scares the adults is death. Skeletons and ghosts, the bigger the better. Bony hands and skulls are what is creepy right now, and we expect children to share that fear.

It may seem obvious that the bones of the dead are creepy, but it wasn’t always this way. Back in the middle ages, people buried bodies in shallow graves, so it was pretty common to see a bone sticking out of a grave after a big storm had washed away some soil. They also dug up graves after seven years, to take out the bones, so a fresh body could be placed into the grave. In Shakespeare’s play, Hamlet, the grave of the court Jester, Yorick is being dug up when Hamlet wanders by. He picks up the skull and gives his famous, “Alas Poor Yorick” speech.  He wasn’t grossed out by a real skull. Imagine picking up a coworker’s skull now. A lot has changed in 500 years.

One of the great ironies of our time is that we have never been more successful at preventing death, and we continue to fear it. Our culture is obsessed with death. Most of our TV dramas are about murder, all the CSIs and Law and Orders. At the movies violent death is everywhere, usually villainous minions being the chief victims. And in the past forty years, zombie movies have become a mainstay in horror films. There are even comedy zombie films, like a recent Bill Murray film, “The Dead Don’t Stay Dead.”

Our secular society doesn’t believe in the afterlife. A peaceful heaven that lasts for eternity is treated as more of a joke in pop culture than a reality. What we do like to imagine are scenarios where we die, then are instantly resurrected as mindless zombies hungry for brains. Like the Sadducees, we have rejected the official version of resurrection, but we can’t stop talking about it. Deep down, we fear that there is no afterlife, but instead, that what happens next will be just like being alive, but much, much worse.

Many film makers have suggested in their films that a zombie is just a mindless consumer, eating and destroying with no concern for any of the consequences. They are a parody of modern life, the undead version of the modern shopper, our worst instincts amplified.

They reflect a fear that the world will take revenge on us for our endless consumerism, and we will end up being what is consumed.

In our reading today, Jesus tells the Sadduccees that they have it all wrong. They have misunderstood resurrection. The afterlife is not like life repeated, but qualititatively different. People don’t get married or divorced, they are free of those obligations. Women are no longer being handed from brother to brother. Jesus tells them that God is not the God of the corruptible dead, but of the living. That living in God’s way is why there is an afterlife at all. To live in God’s way is life, and this is what provides eternal life. Moses and Jacob are not dead at all, but alive and well with God. The Sadduccees’s skepticism and hard heartedness has blinded them to the life force of God’s way, which is present in this life and will continue into the next.

We tend to think of Hallowen’s as a secular holiday with pagan roots, and that is partially correct. But what we forget is how Christian this holiday is. In the first thousand years of Christianity, many people were killed for proclaiming their faith. Others were so imbued with the faith that they were able to work what seemed like miracles. These saints were given feast days so they could be honoured and remembered by the living.

However, by the year 837[2] there were too many saints to fit into the 365 days of the calendar. So, the Pope at the time declared that November 1st would be an all saints day, so every single saint could be honoured, all at once. An old word for honoured is to hallow. So, October 31st became known as All Hallows Eve. In time, that was abbreviated a bit to become Hallowe’en.

Christians have been promised that a loving, ethical life will be rewarded with a good afterlife. So, when people started to celebrate All Hallows, a new ritual appeared, a twist on the pagan one. People would get dressed up as dead saints, to honour their memory. And it became It common for the poor to go door to door, begging for treats known as soul cakes. In return, they would pray for dead relatives.[3]

Many of the key parts of the Hallowe’en ritual, including the costumes and handing out of treats, were invented by Christians. Not to scare people, but to reassure them. Death is not the end. It is possible to live a good life and to be granted eternal life. Hallowe’en was invented as a message of hope, hope for the living and for the dead.   X Over the centuries Hallowe’en evolved.  When the holiday was brought to North America, Turnip lanterns turned into pumpkin jack o’lanterns. Society became more secular, so the saints were replaced by scarier dead people, and now, by children’s heroes. But the anxiety at the bottom of it, what happens when we die, remains, at least in the hearts of the adults to buy the candy and decorate the lawns with evil-looking skeletons.

Jesus told the Sadducees that God is the God of the living, not of the corrupted bodies of the dead. In a sense, God doesn’t believe in death, God is about continuity, and renewal. And that’s something churches need to keep in mind, too. We often worry that church as an institution is doomed. Too few people are coming, churches close and become condos every day. But our goal is not to be church in any particular formulation. Our goal is to be a community that follows God’s life giving ways. As time changes, so does church, because church is the means, not the goal. Few of us would ever have imagined that we could go to church on a computer from home, or the cottage, or even in car, as some people do in this congregation. And yet, this is still church, because it is still about congregating to be in relationship with the God of the living. Today one of our new members lives hundreds of kilometers away. And that’s possible now, thanks to zoom church. Some of our members have never been in our building, and that’s okay too. Church is about a relationship with God that brings us together in community. And that’s what makes all of this possible, in whatever form in needed.