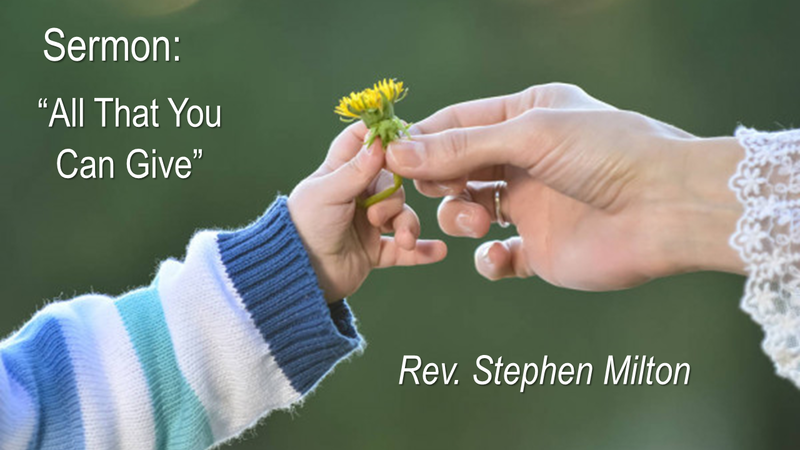 Today’s reading may seem like a strange one for Remembrance Sunday. Yet, it captures a tension which may help us understand the issues raised by this day of remembering those who made the ultimate sacrifice.

In the scripture passage, we are with Jesus and his followers just a few days before his death. They have come to Jerusalem for Passover, a time when the streets are crowded with pilgrims from all over the Jewish world. Jews from Egypt, Babylonia, Arabia, and Syria have come to the temple in Jerusalem to make their sacrifices and say their prayers.

Nowhere is more crowded than the temple itself. It is a huge complex, similar in size to a large shopping mall today, with multiple levels, and massive courtyards the size of parking lots. So, when Christ and his disciples hang out there, to teach and to argue with other Jews, they are never alone. Temple officials and their sympathizers are everywhere, listening to what Christ has to say.

And they don’t like what they hear. Jesus has a problem with the temple system. The priesthood has become a position that is bought and sold among rich Jerusalem families. Practically the first thing Jesus does when he arrives is flip the tables of the money changers, declaring that his Father’s house has been turned into a den of robbers. In today’s reading he denounces the scribes. He says they are full of hot air, show offs for a system that doesn’t work. Later, he even predicts that this massive building will all soon coming crashing to the ground. That doesn’t upset Jesus. He predicts that something better will replace it. A new religious system where the spirit of God will take up residence in the hearts of believers, rather than in an empty room in a giant building.

Yet, despite this critique of the temple, Jesus has tremendous respect for the widow who puts her precious coins into the box.

He may feel that the temple has outlasted its usefulness, and that is doomed to collapse, but he tells his disciples she has made a greater offering than any rich person could. She has given everything for something she believes in, even if the cause she is helping is flawed, even fatally flawed.

Today we honour those who have fought in wars and peacekeeping missions for Canada, and for all of us. Remembrance Day was inspired by the First World War. It began as Armistice Day, a celebration of the end of that terrible war. In 1931, it was formally declared Remembrance Day, to be celebrated on November 11th.[1] World War One casts a long shadow over this day. We wear poppies and recite John McCrae’s poem, “In Flanders Fields,” both a recollection of World War One battlefields. In the aftermath of World War 2, it was obvious that Remembrance Day should be expanded to include veterans of that war. And in time, it has come to embrace veterans of all wars fought by Canadians. And there have been many since then. Canadians fought in Korea[2], at least 20,000 Canadians fought in the Vietnam War[3], serving in American units. Another 40,000 fought in Afghanistan[4], before leaving in 2016. Still others have served as peacekeepers in places like Cyprus, Bosnia, Rwanda and Somalia, and other regions of the world.

Yet these recent wars lack the finality and sense of victory that inspired Remembrance Day. The world wars appear now as tragically necessary, yet triumphant conflicts. Few debate whether Canada should have entered those wars, or whether they were worth it. But the wars which followed have been less clear cut. Korea ended in a stalemate. Vietnam in a loss. Many veterans and their families may have ambivalent feelings about their time in Afghanistan now that the Taliban have regained power. For many soldiers who served in Afghanistan, watching the Taliban take over Kabul must be difficult. They can be forgiven for having misgivings and asking what it was all about if it ends this way.

Today we recognize that when wars end, victory may not be the result. Every soldier goes to war knowing that victory is not guaranteed. They may lose their life or a limb. And in a sense, every war is lost as soon as it begins. War is an admission that diplomacy and peaceful means have failed or have been abandoned. The terrible truth about war is that all of them begin when negotiation fails, and when they end, negotiation resumes. But it is easier to watch the the enemy sue for terms of surrender rather than victory.

If Remembrance Day is to encompass all veterans, then we need to recognize what it means to be a veteran of all these wars, not just the world wars. Like all wars, the modern conflicts result in veterans who return whole, and wounded, dead and alive. 158 Canadian soldiers were killed in Afghanistan, but a minority were killed by gunfire or in battle. Most died when they walked or drove over IEDs – improvised explosive devices.[5] There is no warning in this kind of death, just a sudden explosion, a flipped vehicle, and bleeding out. No one to shoot back at, just a sudden death for simply being there.

And for some who return to Canadian soil, the war does not end even when they are far from the battlefield. 30% of veterans from Afghanistan who were in high-risk situations now suffer from mental illnesses caused by their deployment.[6] They suffer from depression, anxiety, and post traumatic stress disorder. As we heard in Suzanne Steele’s poem, many turn to medications to sleep, to treat anxiety, to just get through the day. In Toronto, a survey of the homeless in April found that 5% were veterans[7], triple their share of the general population. [8] The incidence of post-traumatic stress disorder is much higher in the Afghan vets than it has been among veterans from previous wars.[9] It is also much higher than in the general population. For these vets, the war continues in their minds and in their dreams, long after the war is over.

Most veterans return from combat healthy, able to make the transition back to civilian life. But none of the men and women who sign up for service know whether they will be one of the ones who return with serious mental and physical health problems. None of them know whether they will be the one to die, or witness a friend die in way that will leave them shaken to the core. Each solider who signs up is agreeing to risk their entire life, during and after the war. How they will be impacted is impossible to say. They are making the greatest sacrifice they can offer.

In today’s scripture reading, Christ honours the poor widow who gives all she has for a temple that is doomed. He tells his disciples that what matters most is not the institution, but the strength of character of people like the widow.

The world will be saved not by those who toss words into the air and make promises they cannot keep. What will save the world, and make it better, are those who are willing to give their all for the sake of others. This is what Christ sees in the widow. Her money is not important, it is what lies in her heart which is the true treasure, more important than the entire building around her.

As Christians, we are encouraged to dream of peace, to dream and work towards a world where war is no longer needed. We do not worship the nation state. We are encouraged to see states and institutions as temporary, like the temple was temporary. Our goal is to imagine and bring about a more just political order, where terror and coercion play no part. A civilization where no one is poor or homeless, abused or exploited. We do not worship Canada, NATO, the EU, the UN, we worship God. We do not celebrate war or nations on Remembrance Day. Instead, we are called to remember those who have shown us the best that humanity has to offer in their willing sacrifice for the sake of others. We remember their pain, their fear, their suffering, in battle and at home. We remember the empty places at the dinner table, some which will never be filled. We remember their sacrifice, the ones who died and those who survived. And we dream of a world where that kind of sacrifice for others will only be needed in peacetime. We dream of a time when war is remembered as an institution that faded away.