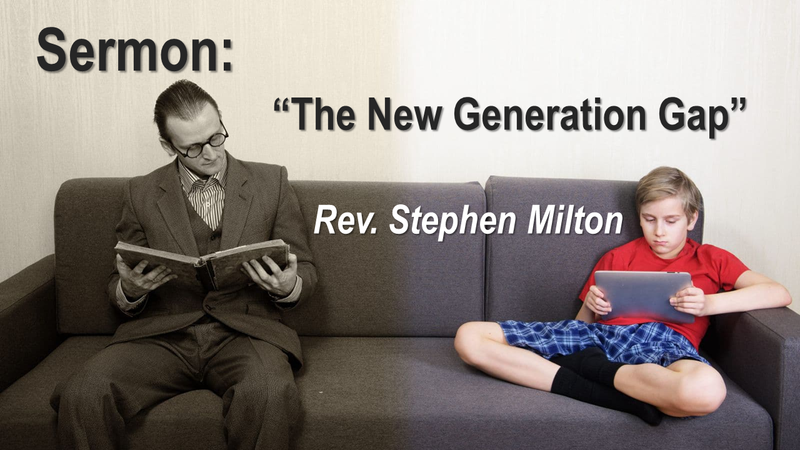 In today’s reading we hear about the terrifying events that will precede the second Coming. They will start with a desolating sacrilege set up where it does not belong. This is a prediction that gentiles will enter into the Temple in Jerusalem and desecrate it. For Jews of Christ’s time, this would be the ultimate religious disaster, God’s own house invaded and sullied by godless Gentiles. When this happens, Christ tells people to head for the hills, get as far away from Jerusalem as possible. The end has come, and Christ will soon return to begin the final judgement.

To our modern ears, these words are unsettling. Why should Christ’s second coming be preceded by so much suffering? Why should there be wars and earthquakes and fear on such a massive scale? The Bible has many apocalyptic prophecies like this one, and they involve two elements. The first is that as long as humans refuse to follow God’s ways of compassion, human society will get worse. Not as a punishment, but as a natural consequence of our actions. The philosophy of might makes right will impoverish most people, and cause states to turn on each other. God won’t cause these events, humans will, by ignoring God’s guidance.

The Bible’s Apocalyptic writings predict that God will bring this time of chaos to an end by directly intervening. God will make the ultimate house call. But that will cause problems of its own, like earthquakes and floods. In the Bible, God is like the sun in the sky. It is millions of kilometers away, and its sunlight is the source of life on Earth. But if it were to come closer, our oceans would boil, and mountains would melt. The Bible sees God as the source of life, so if God comes close to Earth, the ground will shake, and natural disasters will multiply. Not as a punishment, but as a consequence of the creator God coming closer to sort things out.

So, how do you know if the end is near? Jesus predicts nations will be at each other’s throats, worse than ever before, and the natural world will start to fall apart. When this happens, Christ warns his followers to run away from Jerusalem, to head for the hills. His sense of compassion foresees the dangers this will pose for pregnant mothers and those who are breast feeding young children. This time of disaster will be a bad time to have children.

For the past two weeks, the prospect of worldwide disaster has been in the news. In Glasgow the COP 26 environmental conference has just concluded. World leaders from nations all over the world have gathered to make promises to reduce the production of greenhouse gases. Nations have pledged to cut back on oil exploration and coal generation.

As politicians and bureaucrats have debated and negotiated, outside in the rain, protesters have been begging them to do more.

Most of those protesters have been children and young people. They are led by Gretta Thunberg, the Swedish teenager who started the Fridays for the Future movement a few years ago.

She has denounced the negotiations for being too little, too late. “Blah, Blah, Blah,” in her words. At the beginning of the conference, she predicted the leaders would not do enough. The conference goal was to make cuts to prevent the world’s average temperature from rising more than 1.5 degrees above pre-industrial levels. Late this week, the organizers of the Paris Accord did the math and found that Thunberg was right. The pledges made by the nations had missed the 1.5-degree mark and would probably result in rises of 2.4 degrees.[1] This, scientists contend, will be nothing short of catastrophic.

How can so many nations come together and fail to hit the mark? Part of the problem is that most of the polluting nations are democracies. Most of our modern Western states lived through the depression of the 1930s and the Second World War. The promise of post war democracy has been that citizens would never be asked to make major sacrifices again. No more rationing, no more mass unemployment. Constant economic growth is what gets leaders re-elected and keeps democracies in place. To ask citizens to make sacrifices is to risk electoral suicide.

Yet sacrifice and drastic action is what younger people have been calling for. This is where the generation gap lies now. Not in hairstyles, or the clothes they wear, but in what they see as the good life. Kids today are truly different from previous generations. Studies comparing this generation of kids with previous generations have found a radical shift, particularly among children born since 1995. Kids today spend less time in groups. They go to movies less than teenagers in the past[2], and they go to fewer concerts. They see their friends less,[3] they date less, and they do less homework. They even drink and do drugs less. [4]They grow up in families with less children, and spend years longer living at home, often stretching well into their twenties. They are less likely to own a car, and much less likely to get a driver’s license,[5] especially among city kids.

For the generations older than thirty, the good life has meant pursuing personal freedom. The freedom to own a house or live on our own. To have a family. To go on trips, anywhere in the world. Often, we define a year by the trips we took. But to the younger generations, that’s someone’s else’s lifestyle, not theirs. They don’t own cars, and most can’t afford trips as they struggle with student debt and a job market full of part time positions and unpaid internships. xMost youth lack the money to enjoy the carbon-rich lifestyle world leaders are trying to preserve, so they are saying no. They are demanding drastic changes to a lifestyle most of them will not be able to enjoy anytime soon, if ever.

One could object that the kids on the streets of Glasgow don’t represent the average youth in Canada. They are radicals, not typical kids. What do kids here want? Fortunately, recently, the federal government provided a way to answer that question. A few months ago, the federal government released the first ever State of Youth Report. It was written by youth about youth. They did in depth interviews with 1000 young people across the country. [1] https://www.theguardian.com/environment/2021/nov/11/cop26-targets-too-weak-to-stop-disaster-say-paris-agreement-architects [2] I-Gen , 70. [3] I-Gen, 73-76. [4] I-Gen, 41. [5] I-Gen, 30.

The report reveals that in Canada, youth are deeply concerned about the future. They feel that their views are being ignored by older generations. There are six major areas of concern, which include leadership, innovation, the environment, reconciliation and health and wellness. With respect to the environment, here’s what the report says Canadian youth are thinking:

“From a youth’s perspective many adults around them do not view the environment as a priority and see it as an obstacle to a flourishing economy[1]….     [1] Canada, State of Youth Report, 2021, p. 33

Youth describe feeling laughed at, discriminated against, or plainly not taken seriously by the older people around them, teachers, parents, professors, etc. “[1]

The youth called for a drastic change in how we approach climate issues. They called for drastic cuts, an end to oil and gas extraction, and that Crown land should be returned to Indigenous people. Clearly, the demands of Canadian youth are not the same as the views of older generations on these issues. There is a true generation gap.

But There is one detail which is never mentioned in the report. At no point do the youth talk about raising families of their own. It is as though this generation had no interest in having babies. The report speaks about the need for better job opportunities, but virtually nothing about having a family. Christ warned that when the desolation comes, it will be a bad time to have young children. Well, in real life, right now, these young people seem to have received the message. Faced with an unwelcoming economy and environmental disaster, having kids just doesn’t seem like such a great idea to many of them.

The silence in the report about the next generation is backed up by statistics. Here’s a graph of Canada’s fertility rate since 1960. [1] Canada, State of Youth Report, 2021, p. 30.

Since 1960, the birth rate in Canada has plummeted, and was made worse by the pandemic. Young women and men are looking out at the world and saying no, this is no time to be having children.

In the scripture today, Christ predicts a worldwide disaster, and a time when it will not be wise to have children. That doesn’t sound like fiction anymore. The people who are young today will live long enough to see whether all the scientific predictions about the climate were correct. They will live long enough to see if the economy continued to funnel wealth to the few at the expense of the many. They will live long enough to judgement on earlier generations. For those of us who are older, who love children, and hope we will have grandchildren and great grandchildren, it is not too late to stop the sacrilege that is being perpetrated on this sacred earth. There is still time to tell our politicians to listen to our children. We don’t have to hope that God will come down and sort this out. We can do this. For our children, and the beauty of the Earth.