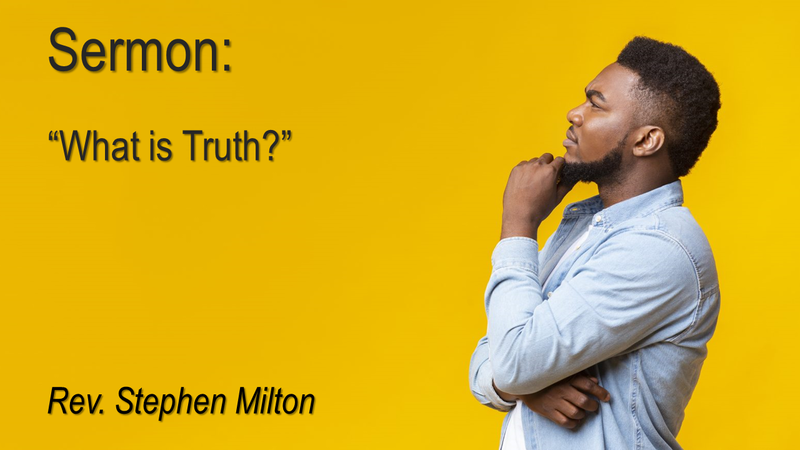 “What is Truth?” That’s the question that Pilate asks Jesus. It’s a scandalous question to come out of Pilate’s mouth. He is the Roman governor of Judea, with the power to decide who lives and who dies. Yet, here, in the gospel of John, Pilate asks “What is Truth?”. It is John’s way of saying that this Roman governor, and his whole imperial government, has no right to rule, much less decide whether Jesus should be executed. This authoritarian government is foolish, cruel, and represents everything that is wrong in the world. John wants us to see that dictatorships are no way to run a nation, another, better system is needed. One inspired by the values Jesus has been teaching.

But this little scene in John’s gospel presents another question about the truth of the Bible itself. This scene is vivid, easy to imagine.

Jesus is bound, standing before Pilate. A few guards stand nearby to make sure this prisoner doesn’t escape. But which of them is taking notes? None of Christ’s followers are here. Just the Romans.

It is unlikely the guards or Pilate told the disciples what was said this morning. So how do we know that Pilate ever asked, “What is Truth?”   The most likely answer is that John created this dialogue decades later, based on stories told by Christ’s disciples. But that raises another thorny issue. These words are recorded in the gospel of John, the last of the gospels to be written. There are three others, Matthew, Mark, and Luke. They also have a scene of Jesus before Pilate, but the words are different. Pilate doesn’t ask “What is Truth?” In fact, the four gospels are often in disagreement with each other. In the first three, Jesus only visits Jerusalem once after he begins his ministry. But in John’s gospel, he goes back and forth to the city many times. In Mark’s gospel, Jesus doesn’t want people to publicize that he is the Messiah, whereas in John’s gospel, Jesus announces it often. In Matthew’s gospel, Jesus delivers the sermon on the mount, but in Luke’s it is called the sermon on the plain, and the words are different.

From the beginning people have asked whether we can trust the gospels since they don’t sound the same. How can we believe any one gospel if the details are presented differently in the other gospels?

The existence of these four different accounts of Jesus’ life reflects a way of understanding what is truth. Consider this chair. Imagine that we wanted to build a chair just like it. If we could only see it from the front, we might conclude that it has just two legs, since seen straight-on the back two legs would be hidden. If we see it from the side, we would realize it has four legs, but we wouldn’t know the colour of legs on the other side. So, we would need to add that view, too. But even with these three perspectives, we wouldn’t know about the colour or shape of the back of the chair, the curve of the back rest. To really know the truth of the chair, we would need to see it from at least four angles. Ideally, we would also see it from the top and bottom, as well. But each view shows what seems to be a different chair, yet it is all the same chair.

The people who put the Bible together explicitly argued that to know the truth, one had to see Christ’s story from multiple perspectives. They knew the gospels contradicted each other in various details, but that didn’t bother them. They understood that each writer was trying to call attention different aspects of Christ’s message, so they emphasized different details. The early theologians embraced a view of truth that required a non-literal, multiple perspective view. And they liked that there were four gospels. They said that it was completer and more whole this way. Four gospels provided a fullness of truth that was like the four cardinal directions of north, south, east, and west. It was like the four corners of the world, and the four winds. It was like, they argued, the way God sees the world, from all angles simultaneously.

But how are we human beings supposed to do that? How do we see the world as God does? The rest of the gospels show the way. The key, Christ says over and over again, is to help the poor and oppressed. Get to know them, find out what the world looks like from their perspective. When you help them, Christ says, you are helping me. Or, to put that another way, when you help the poor and marginalized, you are getting closer to Christ, the source of all.

It is easy to see Christ as being the King of nice in the gospels. He sees someone suffering, and so he heals them, because that is the loving thing to do. But it’s not just who he heals that matters, but how. Jesus could just see people from a distance, and without a word, wave his hand and heal them. But he doesn’t do that. Instead, he talks to them, and asks them what they want. Jesus wants us to see these people as just like us – their poverty or possession by a demon is not who they really are, these are just circumstances. How we treat the oppressed is just as important as who they are. Jesus wants us to get close and see life from their perspective, hear it in their own words. To See life from their angle, not just ours.

Perhaps a modern example can help unpack this. Tomorrow is National Housing Day. It’s a time when we are encouraged to think about how we can provide housing for everyone. Most of the media attention will be focused on people called “the homeless”. As a culture we are fascinated by the people who end up sleeping outside or in shelters. How did they get there? What character traits or life experiences landed them in this tragic position? In my time serving on the Roehampton Shelter Community Liaison committee, members have asked lots of questions about the type of people who end up in the shelter. How many are addicted to drugs? How many are men and women? How many commit crimes or used to be in encampments?

The city collects a lot of data on the people who are experiencing homelessness. Their identity is not a mystery. Most are men. The majority have experienced homelessness for over a year. Indigenous and racialized people are overrepresented relative to their proportion of the population. [1]About half suffer from mental health issues.[2] About a quarter have physical disabilities.[3] Almost half have more than a high school education - five percent have graduate degrees.[4] All of them are poor, but most have some source of income, often social assistance from the government.

This may seem to answer the question of why people are homeless, but it is incomplete. It is like we have looked at only a few angles of the chair. Are there Indigenous people among the homeless? Yes, but most of Toronto’s Indigenous people aren’t on the streets, they have housing. Are most of those in the shelter’s men? Yes, but that doesn’t explain anything either, since most men in the city have housing. Most of the people with mental health issues never end up sleeping outside or in shelters. The same is true for people who are addicted to opioids. Most are at home doing their drugs, not in the shelters.

These people are not experiencing homelessness because of their character traits, since those same character traits can be found in greater numbers among the housed. When we focus on the person who doesn’t have housing, we are implicitly assuming that they are the author of their own misery. We are blaming the victim for not being housed. The perspective is too narrow, like we are only looking at the chair from above. It is not God-like enough to get at the truth of the situation because we are not looking at the society around them.

Christ asks us to draw close to the oppressed because when we do, we will discover not just their story, but our own. If we are honest about it, we will discover their humanity, and the attitudes of the society that has chosen to marginalize them. In Toronto, we assume that there will always be homeless people because of their personality traits and life choices. But there are other ways of looking at this.

In Finland, homelessness has been radically reduced. They didn’t solve any of the personality traits we find among homeless populations. What they did do is dedicate money to special affordable apartment units, staffed with social workers. If you can’t find a place to live, you can live there, for a low rent. You get help to find work or social services to get back on your feet. And you are expected to pay back the rent when you are able. In many cities, there is just one small shelter, but thousands of affordable apartments. It is expected that homelessness will end completely by 2027, and this program is cheaper than the old shelter system.[1]

Both Finland and Toronto have people who suffer from addiction and mental health breakdowns. But one society decided that they should not have to be homeless, whereas our society still thinks that is acceptable. Homelessness is about social choices, not just personality traits. But we can only get to that conclusion if we try to look at the problem from all angles, not just from the top down.

Today’s scripture presents two options. Pilate, the head of the Roman government in Judea, can see that Christ is completely innocent. He has committed no crime. But for political reasons he asks the crowd what he should do. They demand that he free a bandit, someone who lives by violence. Pilate is a political animal, so he chooses to sacrifice the innocent Christ so he can keep the crowds under control.

He has no interest in truth or justice, just power. Christ offers another way, where truth and reality are seen from multiple angles. Where we plainly recognize that this world is not what it should be. That there is a better way. A kingdom is coming, not yet of this world, but it is aching to become a reality. The way to get there is to draw close to God’s way of seeing the world. And to do that, we are encouraged to draw close to those who are suffering and are oppressed. With their guidance, we will see what’s wrong, and what needs to be fixed. Not just what’s wrong with them, but what’s wrong with society as a whole.

When we can see our situation from all sides, we will find new solutions and possibilities. By seeing reality more like God does, we will find ourselves closer to God. We will be closer to answering that question, “what is truth.”