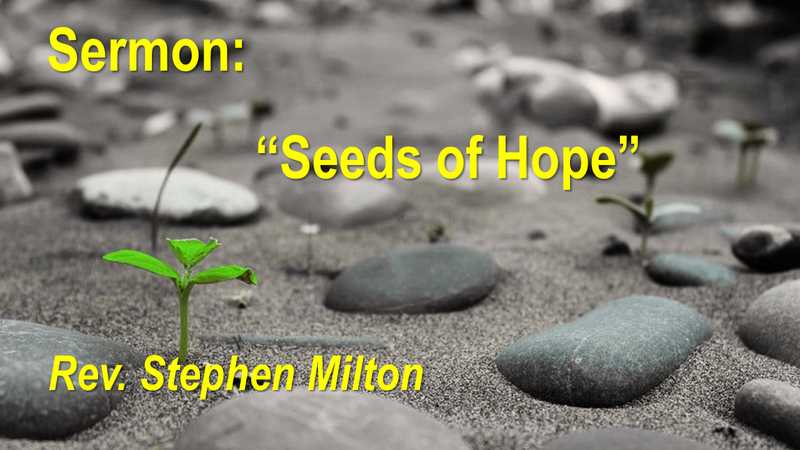 Today is the first Sunday of Advent. Over the next four weeks, we will be hearing scripture readings that are full of anticipation about the coming of the Messiah. Unlike the stores and malls, which have been playing Christmas music for a few weeks now, within the church, we like to slow things down. We don’t rush into Christmas during our services, but slowly work our way there.

Our goal is to be reminded that Christ’s coming was the end of a long period of expectation. In today’s reading, we hear one of the first prophecies promising that a Messiah would be born. The prediction comes from the prophet Jeremiah. He lived in the 6th and 7th centuries before the common era. He had been chosen by God to be a prophet to the Jewish people at a time of disaster. In the year 586 BCE, Jerusalem had been sacked by the Babylonian empire. They had besieged the city for many months, then finally broken through the walls. They destroyed the city, leaving it in ruins, including the temple. The royal family and the court were dragged to Babylon, in what is now Iraq. The rest of the Jews in the city were scattered, many taking refuge in Egypt. Jerusalem was left as a ghost town, a heap of smouldering ruins. The great Jewish kingdom had completely collapsed in defeat.

It must have seemed like Jewish civilization was finished. The temple had been God’s house, and now it was destroyed. It appeared that God had abandoned the Jewish people. At this time, most Middle Eastern cultures believed that gods controlled everything. They decided who won and lost wars, they decided the weather, and they were in charge of time. The Babylonians kept careful records of the stars and eclipses, trying to discern the will of the gods. The ancient Greeks at this time believed that you couldn’t change the minds of the gods. You may remember reading Greek tragedies in school. A prophecy predicted that Oedipus would have sex with his mother and kill his father. No matter how hard he tried, there was nothing he could do to escape his fate. The gods were in charge, and all we humans could do was fit into their plans, never change them. That was the tragedy of human existence.

Our society has increasingly been drawn into this view of fate. We don’t refer to gods, but more earthly conditions. Everywhere we look, advertisements and Instagram posts tell people, especially women, that your fate is tied to how attractive you are. Your body’s curves, your cheekbones will decide whether you will be popular or ignored. For racialized peoples, it often seems like the world takes one look at their skin colour and decides how far they can go in society. In the United States, nine states, including New Hampshire and South Dakota, have passed laws this year forbidding schools from even discussing the idea that systemic racism exists. Another nineteen states have similar bills in the works. [1] Denying that racism exists is an excellent way to make sure it persists. Whenever we tell ourselves that what exists now is all that can exist, we are resurrecting those old ideas of fate.

25000 years ago, The Jews lived among the star-reading Babylonians, but they had a different view of fate. In today’s reading we hear God’s message to them: don’t give up. Jeremiah tells them that God is ready to help them again. He speaks of Jesse, King David’s father. God promises that another king will be born, from that same bloodline. A king who will bring the people close to God once more. Jeremiah also makes the audacious prediction that the Jews will once more return to Jerusalem, to rebuild the temple, and to live with flocks where only weeds grow now. During the heartbreaking years of their time in Babylon, this message must have sounded outlandish, even impossible. But it re-introduced hope to a people who had felt they had no future. God was telling them that what exists now, does not mean it will always be this way. Change is possible.

And that idea is not just about what will happen in the future but has the power to change how we feel about our lives right now.

Psychologists tell us that there are two kinds of happiness.[2] The first is the happiness of an event that brings joy and gladness. You get a raise, or a good mark on a paper, or you hear that you or someone you love is pregnant. The other kind of happiness comes from anticipating a happy event. Some people enjoy planning for a trip as much as going on it. In our house, the joke is that I get excited about a trip when I am on the plane. My wife and daughters are happy for months before the trip even begins, as they make plans, buy new clothes, and start living the trip in their heads long before we go to the airport. Many people approach Christmas the same way. In some households, Christmas creeps in slowly, starting with a present bought in August, then accelerating throughout the fall. The debate begins – is it too early to listen to Christmas music or to watch Christmas movies? Is it too soon to buy a tree? Do we have to wait until December 1st?

The anticipation of a happy event is known as hope. The belief in something good that has not happened yet. The belief that good things are possible, despite all the present evidence. There are times when reason alone provides no justification for hope. The ancient Israelites must have felt that way during their captivity in Babylon. They were finished as a people, there was no going back. But then God gave them reason to hope. God planted a seed – a hope that they would be able to return home. That hope gave them a reason to keep going, to see beyond the dark horizon of tomorrow.

And that part came true. In time, the Persian empire defeated the Babylonians, and the new emperor sent the Jews home. They were able to rebuild Jerusalem and the temple after 70 years away. But this prophecy contains another, longer-term seed. It promises to provide a king from David’s line who will be the messiah. This will not happen right away, but in God’s good time. As Christians, we believe that Jesus of Nazareth is the fulfillment of this prophecy, the man born in King David’s line. The one who not only fulfilled a hope, but became known as the hope, the light, of the world.

Jesus came as one who did not believe that time was fixed, that every moment was predetermined by the gods. He offered hope everywhere he went. He healed people who had been thrown away by society, dismissed as hopeless. He encouraged us to put aside anger and fear and embrace love instead. When people are afraid and angry, we can’t think straight, we want simple fast answers. When we are relaxed and non-judgmental, we can see an enemy as a future ally, we can forgive someone when before we would have stopped speaking to them. Love isn’t just a moral imperative; it is a cognitive and emotional way of being that makes us more effective as human beings. We can imagine and realize better goals when our minds and hearts are open, than when they are closed.

Christianity marks a shift in world culture, a new belief in hope. In Greek tragedies, people are stuck with their fate. In Christian stories, starting with the gospels, people change. Our lives, and our hearts, can change and improve. Childhood traumas can be faced and overcome; they do not need to rule our lives until we die. In Christianity’s world, Saul the assassin becomes Paul the apostle, who writes over half of the pages of the New Testament. Or consider Simon’s example. On the night of Christ’s arrest, he denies he even knows Jesus. Yet he is the one who Christ renames Peter, the rock on which the church is built. In Christianity, the future is not fixed. The future of individuals and entire societies can be changed, for the better, because we have hope to inspire us and lift us up.

As we rely more and more on computer models for climate and market predictions, we should keep in mind the importance of hope. As long as human beings are part of the equation for creating the future, it matters how we common people feel. A pessimistic population will make very different decisions than a hopeful one. If we are to successfully face the challenges that lie ahead in our world, we will fare far better if we can be hopeful. Even when the evidence seems against us. For hope gives us a special kind of vision, to see possibility and opportunity where others see just more of the same. And so, as we enter Advent, let’s embrace the hope Christ has given us. Hope that flows not from the world as we see it, but from the world of possibility as God sees it. For God saw shepherds and their flocks, happy children, and a thriving city where others saw ruins and destruction. Let us “hope” that we will be open to hope, both this month, and in the years to come.