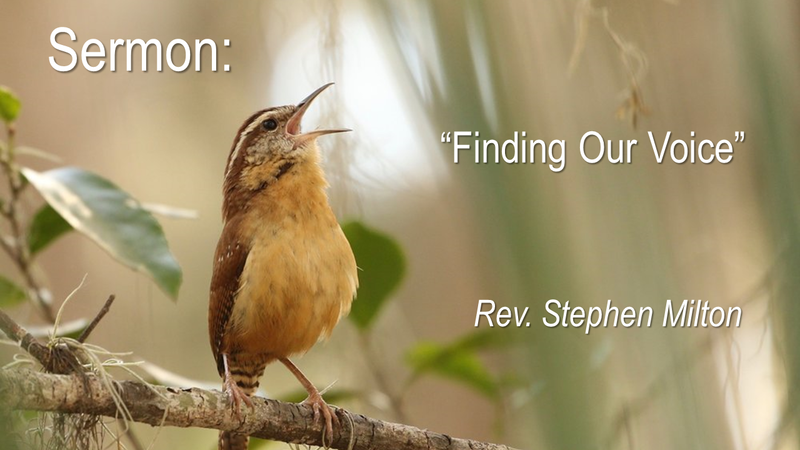 To listen to the full Sunday Service click here.  If you would like to see the Christmas Pageant again, please email Judi at judi@lawrenceparkchurch.ca to receive a copy.

Today’s scripture reading is a part of the Christmas story we don’t know so well. It’s from the story of how Jesus’s cousin was born. His cousin became known as John the Baptist. His father was Zechariah, a priest in the temple in Jerusalem. The gospel of Luke opens with old Zechariah in the temple, on duty, alone, lighting incense. Suddenly, an angel from God appears. This hasn’t happened for centuries, so Zechariah is surprised. But he becomes even more astonished when the angels tells him that he and his elderly wife Elizabeth will have a child who will be a prophet for the Messiah who will be born soon.  The child will be called John.

None of this makes sense to Zechariah. Back then, children were named after people in their family, like grandparents*, so naming this child John was totally unorthodox. But there was an even bigger problem: Zechariah’s wife is way too old to have children. So, he tells the angel this: “How Can I be sure of this? I am an old man and my wife is well along in years.” This whole situation isn’t anything like what Zechariah and his fellow priests had been expecting, so he says this is impossible.

And for that, the angel takes away his ability to talk. Zechariah returns to his wife mute, only able to communicate by scribbling words on wax tablets. He remains mute for the whole pregnancy. When the child is born and he is asked what to name him, he scribbles down the name “John.” It is only then that he gets his voice back, and says the words of thanks that we heard X read today.

Zechariah is like many of us today. We find it hard to bring the Bible and modern life together. The world of the Bible is very different from modern life. No one drove cars back then, women didn’t work in offices, people were expected to be just two genders, not many. They didn’t have racism, but they did believe in magic. How could anything they said in the Bible back then apply now to our life of skyscrapers, planes and the internet? Too much has changed, it feels like we need a new gospel, one that is written now, to deal with our problems now.

But Zechariah’s story shows that even back then, in Biblical times, an angel could show up, stand right in front of a person, and a priest like Zechariah could shake his head and say nope, this isn’t what I was expecting. That happened even back then! Same tech, same Biblical lifestyle, everything, but still he has doubts because it is not happening the way he thought it would.

The truth is, that’s what faith is like. It never comes straight out of book, exactly the way you’d expect. Faith requires that we all be translators. That we take what was promised and spoke about then, and find a way to apply it now. Not as a compromise, but as the action of faith itself. God isn’t interested in whether we can take the Bible and recreate it in our lives like some museum piece. Those times have already happened. God wants to see what we will do the message of peace and love in our times. How we apply the old message to this new age. The exciting part is how we create peace, love and hope in this time, in these circumstances. It may seem like the Bible is becoming more anachronistic as time goes by, but even Zechariah resisted the change when it came, and he lived in a time of shepherds, sheep and almost everyone was a farmer. The challenge of faith is not how much our technology has changed, but our inner resistance. That was true then and it is still true now.

The word gospel means “ good news.” We are called to make goodness new again, over and over. Don’t worry about whether it looks like it used to – the fun happens when it doesn’t.

So, let’s keep finding new ways to tell this story and to apply it. Let the kids know that when they re-interpret the gospel by putting it on TV, having the story told by gossipy desperate housewives and judges on the Voice, they are doing God’s work. Today’s pageant is the gospel on the move, made new again for an era of Zoom calls, lock downs and worldwide pandemics. New circumstances call for new interpretations and new approaches. And if it doesn’t seem to be the way the Good Book expected – no worries. It’s when we bring the old and the new together that we find our spiritual voice.