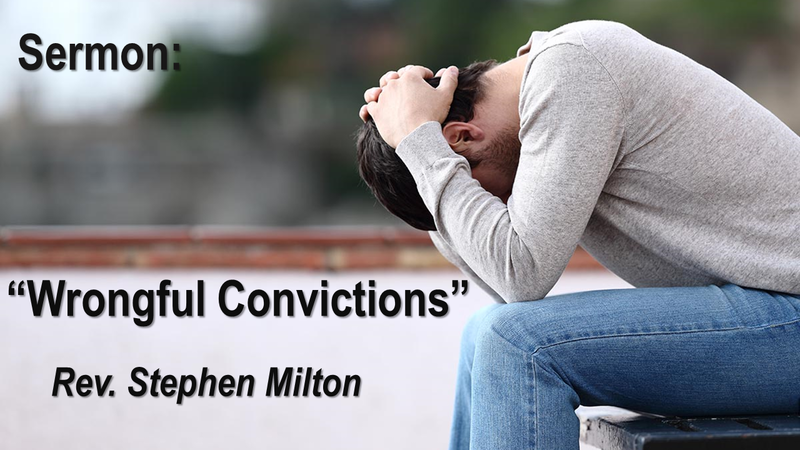 Two weeks ago,[1], Canada’s most famous prisoner died – David Milgaard. He didn’t die in prison, but in his home province of Alberta.   [1] May 15, 2022: Jana G. Pruden, “After a life sentence for a murder David Milgaard didn’t commit, he devoted his life to pursuing justice for others,” Globe and Mail, May 21, 2022

He had been convicted of rape and murder when he was 17, back in 1970.[1] He always maintained that he was innocent.

That was a tough call for a teenager to make. Had he pled guilty, he could have had a reduced sentence, and been eligible for parole. But he had no intention of lying, so he pled innocent to the charges, and was sentenced to life imprisonment with no chance of parole.

The reason he became famous was that in 1992[2], the Supreme Court of Canada overturned his conviction. But that didn’t erase what David Milgaard had been through. Imagine being 17 and going to prison for a crime you didn’t commit. Being innocent and knowing that you would spend all of your youth and middle age, and possibly your old age, too, in prison. That was what Milgaard faced. He was tortured by the experience. He tried to commit suicide.[3] He broke out of prison several times, once after he had been raped.[4] His arms bore scars of all the times he had cut himself, just trying to feel something in his zombie-like existence in prison. A common practice among prisoners.[5]

For years, the Canadian public was told by his mother Joyce that he was innocent.

Joyce Milgaard was persistent, constantly talking to journalists and politicians.

Milgaard’s case exposed the public to the idea that not everyone in prison is guilty. Some are wrongfully convicted. Others are prison without ever having been convicted of anything.

Here in Ontario, 69 percent of all prisoners in provincial jail have never been convicted of anything.[1] They are officially innocent. They are in jail because they lack the funds to make bail, or because they are considered a flight risk, or a danger to the community. Many will plead guilty to reduce possible jail time, often even when they are innocent.[2] Of all the people held in jail without convictions, almost half, 38% percent, will be declared innocent by the courts.[3] There are thousands of innocent people in our jails. When they get out, they have lost their jobs, their housing, and now bear the stigma of having done time, which cripples their career prospects.

Jail is not only for the guilty. It is also a place where innocent people can be found, problem children of the state who are being kept off the streets. And some of them, like Milgaard, will watch their youth disappear behind bars.

As Christians, we are called to care about people in jail. Christ tells us to do this in that famous passage,
“I needed clothes and you clothed me, I was sick, and you looked after me, I was in prison, and you came to visit me.” (Matthew 25:36) Indeed, the most influential of the Apostles, Paul, spends his Christian career going in and out of prison.   Paul’s letters make up almost half of the words in the New Testament, and four of those letters were written from jail.

[1] And in today’s scripture passage from the Book of Acts, we are told of how Paul ended up in prison in the city of Phillippi.

The Roman empire had a justice system that was founded on a double standard. If you were a Roman citizen, you had rights and privileges that other people did not have. You could not be whipped before a trial. You could not be put to death except for treason. You could even insist on a trial before the Emperor. But everyone else suffered from a much harsher form of justice, like Paul and Silas experienced. The local officials assumed they were not Roman citizens, so

Paul and Silas were treated with contempt, beaten without trial, and placed in chains in prison. Paul comes from the town of Tarsus, which had bought Roman citizenship for all of its citizens, including Jews like Paul.[2] So when says he is a Roman citizen, the local officials realize they have made a terrible blunder. Like our system, where how long you spend in jail before trial depends on money for bail, the Roman system had two rules for who should be in jail.   The reason this story is so remarkable is not that Paul was thrown in jail, but what happens while he is in there. At midnight, Paul and Silas are singing hymns and praying. They have not lost hope, despite their situation.

When an earthquake shakes the prison, the doors fly open, and the chains come off the walls. It’s dark, so the jailer cannot see properly. He can tell that the doors are open, so he thinks that the prisoners have escaped. This is a disaster – the Roman officials will punish him, and perhaps his family. So, he draws a sword and prepares to kill himself. But Paul stops him, telling him everyone is still here.

Paul could have walked out of there. He could have escaped from the system that had beaten him and might do worse in the morning. But instead, Paul, who had seen the light of Christ, decides to stay and save the life of his jailer. This is Christ in action, that love for the other which seems so hard to put into practice. Despite being covered in bruises from being beaten, Paul still loves this man, and saves his life. And soon after, Paul offers him spiritual salvation when the man asks to be baptized. He wants to be part of this astonishing faith that cares for strangers, even enemies. Even when the prison doors are thrown open, and his chains are broken, Paul chooses not to escape from prison, but to stay, and extend loving care to an enemy. This is why this story is in the New Testament.

In real life, innocent prisoners can’t count on an earthquake to open the doors to set them free. David Milgaard had no such luck when he was in jail. So, he did the next best thing. He escaped from prison three times,[3] usually on temporary furloughs. He couldn’t bear the idea of being locked up for his entire life for something he didn’t do. One of those escapes led him here to Toronto where he lived incognito for two months selling encyclopedias and finding a girlfriend.

But each time, he was caught and dragged back to prison. So, his prison experience was very different from Paul’s, where God opened the doors. But there is a Christian element to this story. David was freed from prison because of his mother’s tireless efforts to get him out. Joyce Milgaard was a devout Christian scientist.

She believed that God does nothing wrong, and that there is good in every situation and in every person. That evil is an illusion.

To Joyce, that meant that David’s imprisonment and release could serve a higher purpose, to teach the Canadian justice system a lesson. She came to the realization that getting David out of jail was not a question of her looking after her own son but doing God’s work on everyone’s behalf. She says that each morning she would wake up and ask God, what do you want me to do for David today?[1]

After David’s last prison break, she became determined to find a way to prove he was innocent.[2] She was a born salesperson and was a property manager of 700 buildings[3] . She talked to every journalist and politician who would listen. But this isn’t a story just about her faith. Other churches joined the cause. The United Church of Canada held a day of prayer for David. Catholic churches said masses on his behalf.[4] That peace of Christ which we share in each service, it is the beating heart of each church. It is what allows us to connect to each other, to share common goals and missions. And it can travel. In prison, David slowly converted to Christianity through meeting Christian volunteers who visited him over the years.[5] He says that he kept his sanity thanks to his mother and his faith in Jesus.[6]   One of the American churches who heard about the case raised funds to hire a private investigator to help Joyce re-examine the evidence.[7] That led to the discovery that eyewitness testimony had been coerced by the police.

In 1992, the Supreme Court of Canada overturned the conviction, the first time it had ever done this. David was free. The jail doors were open.

David left jail and was proven innocent by DNA evidence a few years later, when the real killer was identified.

But in another way, David and his mother stayed in jail. Both of them became advocates for prisoners who have been falsely accused[1].   [

David helped set up a prison rights organization[1], and so did Joyce.[2] They could have run away from the whole system, and never looked back. But they didn’t. They stayed to help those who were still in prison. Like Paul, their Christian faith led them to look beyond their self interest to care for others who were still in danger. That is the miracle in these stories. Not the earthquake that springs the doors open, but the one that breaks a soul open. The real miracle is the change that comes with faith. The moral earthquake that opens our souls to the love of others, so we can help those in danger even when it would be easier to run away. We pray that this kind of God-sent earthquake keeps shaking us. May it keep breaking open the doors of our hearts. Break us open so we can free all those who have been imprisoned by hatred and ignorance, fear, and despair.

[1] Jana G. Pruden, ‘This can happen to you.’ David Milgaard works to help free other innocent people – even though it opens the wounds of his past,” Globe and Mail, August 7, 2019 [2] Warren Bolon,” ‘Please, Madam Minister, set my son free' The power of a mother's love to correct injustice,” Christian Science Sentinel, May 13, 2002.