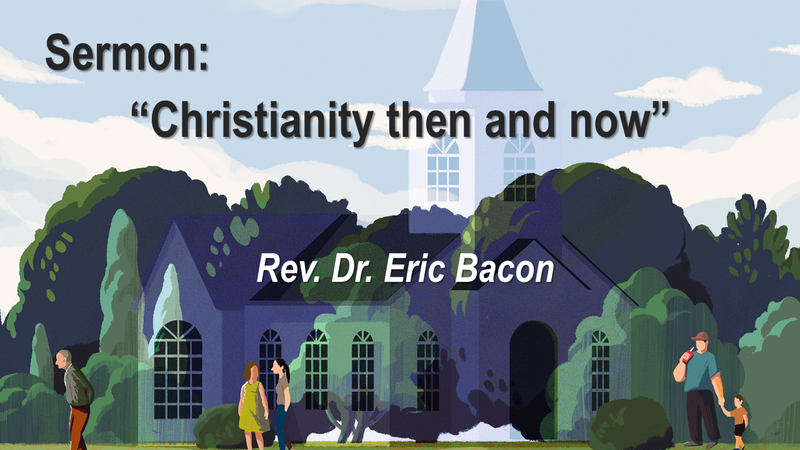 I am mindful this morning after a long period away from the pulpit that to occupy it is both a privilege and a challenge. That challenge from my perspective has increased for two reasons . . . the need to cover a theme or subject in no more than twenty minutes and, more importantly, the diminishing relevance of the church universal that has become an urgent question for all of us, clergy, and laity alike.

It is not my intention to dwell on these numbers this morning but before moving on let me share three other more troubling markers of decline.

At the time of my ordination in 1995 there were 24000 baptisms of both children and adults. That number 25 years later was 3700. Likewise, the number of marriages in 1995 was 20200 and 25 years later that number was 2600. Simply put these numbers confirm that parents no longer consider baptism an essential ritual for their children and that couples do not look upon the church as a marriage location or for the marriage to have God’s blessing. It is also significant that over the last ten years the number of United Church congregations has declined by 571, an average of one a week. Whereas statistics are useful and speak for themselves they do not tell the whole story. All these numbers in part explain the diminishing relevance of the church today in society.

When I entered seminary in 1992, I was aware of three facts that could have changed my mind and suggested a different direction for my life: First, the church was dying. Second: throughout Canada there were United Church congregations that year after year were unable to attract and retain a minister. As a result, it was often that new ordinands found themselves settled in difficult, if not toxic congregations. I am sure you will agree that problematic congregations require very mature and experienced leadership. And Third: in my view, the church as perceived by society had become or was becoming irrelevant and essentially ignored. We are very aware that the tragedy of residential schools and widespread sexual abuse, especially of children, throughout the church universal has damaged it, possibly irretrievably.

In 1991 the late Bishop John Shelby Spong wrote his controversial and widely read book Why Christianity must change or die. Spong is viewed as an important and respected voice for liberal Christianity. Whereas Spong came under fire from the halls of orthodoxy many Christians felt a strong attachment to what he had to say. Note that the book’s title doesn’t refer to the church dying but rather Christianity itself. Time doesn’t permit a detailed explanation of his main points and so a very brief summary of his philosophy will have to suffice. Spong, in the words of his reviewers, “Sounds a rousing call for a Christianity based on critical thought rather than blind faith, on love rather than judgment, and that focuses on life more than religion.”  I say Amen to that! This sounds extremely healthy if you place Spong’s philosophy in contrast to orthodoxy and the church that demands compliance; is quick on judgment; and places religious rigour over what should be the joy and fullness of life or, to use the words of Jesus, what is life abundant.  I want to come back to what I believe is the heart of the matter and that is the question of the church’s relevance. We know that over the centuries scientific discoveries have questioned biblical thought. A significant example being Darwin’s theory of evolution and the Creation story. Likewise, Copernicus and his discovery that the planets revolved around the sun upset the three-tier biblical model of the earth with heaven above and hell below. So, on a lighter note of humour, we could say that if it is not up or down, where are we going? . . . And so, speculation is somewhat futile. In introducing scientific discoveries, I am in no way suggesting that the Bible has no credibility when standing alongside science.

What I have outlined before you this morning is not intended to dispense with the church or indeed Christianity but as a preface to the critical question of relevance and particularly to the new generations. Their knowledge base and intellect are far greater than what occupied our minds in our formative years. Social media has had an immense impact on the astuteness of our children and grandchildren. For the young active and inquiring mind, the concept of a God, most often described as loving, who was prepared to have his son die in a cruel and barbaric way for our original inherited sins is a hard sell. I respectfully add that at the very least this renders the well-worn phrase “God is love” as hollow. If you feel that these are harsh words from the pulpit, then you may wish to run this biblical teaching by your children or grandchildren and listen to their response.

Yes, you may say, Eric, you have given us a diagnosis and so what prescription do you have to offer for the church and Christianity as it goes forward, or in fact dies. Let me preface my response by saying that I am simply one voice who has tried throughout three decades of ministry to make sense of this whole enterprise of faith, scripture, and the call to discipleship. One hundred years ago Albert Schweitzer, author, theologian, philosopher, and I might add, an organist said, and I quote: “What has been passing for Christianity during these nineteen centuries is merely a beginning, full of weaknesses and mistakes, not a full-grown Christianity springing from the spirit of Jesus.”  The spirit of Jesus inspired an authentic way of life. The church has promoted compliance and belief. We might ask if Jesus was observing the church today how many tables he would overturn?   I gravitated to ministry, not with delusions of grandeur that I would be changing the world, but for the opportunity to make sense of all of this and share it accordingly, certainly not prophetically but as a fellow seeker and searcher. I have found considerable enlightenment and fulfillment in this task.

The church is often described as not being a business, a bureaucracy, or a marketing organization. I believe that it has become all of these things. With the exception of a bureaucracy the other characteristics are necessary especially as the church endeavours to survive. In a strictly marketing context and using its language we have to examine and refine our product by focusing not on religious conformity but on the authenticity and integrity of the life of Jesus and in turn our lives. The word product may be heard as objectionable but in reality, the church does promote and share a product. You may remember the slogan in the old commercial for the Dofasco Steel Company heard on CFRB: Our product is steel; our strength is people. By the same token we may say that our product is the Way of Jesus Christ, and our strength is when we collectively wear that identity.  To stay with the language of marketing we must choose our channels of distribution that call us to determine which ways and processes we use to reach out to the community. It is fair to say that LPCC is ahead of the game in the use of technology and social media in that its reach has expanded significantly. The hard question, and I will not attempt to provide a concrete answer is what is the church’s niche? Yes, another marketing concept. How do we differ in character from other communities? What I will offer is if we examine our declared raison d’etre as followers of Jesus then it is his life that is worthy of emulating, not as a religion or necessarily a collection of beliefs, but as an authentic life. I don’t think that there is any disagreement that this lies at the core of who we are. Dogma and creed from earlier times simply summarized what to believe rather than how to live. I refer you to the Apostle’s and Nicene Creeds in Voices United, pages 918 and 920. In the last century there has been an increasing number of theologians and other contemporary writers who have addressed the search or quest for the historical Jesus. That quest as I understand it is to peel away the layers of religiosity, orthodoxy and dogma that have clouded over the simple idea of authentic living. To fully appreciate this, we need to return to the model of the early followers of Jesus that Marilyn read earlier from The Book of Acts: “Those who welcomed the message of Jesus were baptised. They devoted themselves to the apostles’ teachings and fellowship, to the breaking of bread and the prayers. All who believed were together and had all things in common. They would sell their possessions and goods and distribute the proceeds to all, as any had need. They broke bread at home and ate their food with glad and generous hearts, praising God and having the goodwill of all the people.”  All in all, a wonderful way of being and sharing in community. That imperative has never and will never change. This is not the old-time religion. It is the central tenet and principle that lies at the heart of Christianity to which we are reminded that at some time you and I have signed on!

Dr. Tim Keller, a Presbyterian, nicely summarizes the principal characteristics of the early church, the first followers of Jesus. Collectively he calls these characteristics a social project.

The early Church was: Multi-racial and experienced a unity across ethnic boundaries that was startling. A community of forgiveness and reconciliation Famous for its hospitality to the poor and suffering. A community committed to the sanctity of life.

Keller went on to say that the early church didn’t fit in with its surrounding culture but rather challenged it in love, that Christianity eventually had an effect on it. He asks the question of all of us and issues a challenge that we should take seriously: “Could essentially the same social project have a similar effect if it were carried out today?” The question itself suggests that the church has lost sight of that original model of Christianity. The question is often asked as to whether we serve a living God or a religion?

I believe that the answer to many of our questions in this whole arena of faith, belief, and especially Christianity directs us back to how the Christian life was first manifested . . . to the very essence of the Way of Jesus and to apply some resuscitation.

Over the centuries the church has had an essential role to play in society from education to healthcare and caring for the poor and hungry. Historically it has been the very centre for community, as gathering places, and as sanctuaries for worship and indeed safety. We might ask what is it that the church offers today that is not provided in other places and by governments? What is it that we offer that will be value added for a modern society? Is there such a thing as a religionless Christianity? I think so given how religiosity has tainted an otherwise authentic example of being in relationships informed by love, compassion, justice, and forgiveness. A Christianity that genuinely practices acceptance, diversity, and inclusion. The prophet Micah provides some very simple advice . . . Jesus requires us to do justice, to love kindness, and walk humbly with God.  This is the richness of what we try to be and yes it remains the church’s product. To market it is to live it. (repeat for emphasis). That is exactly what God requires of us today.