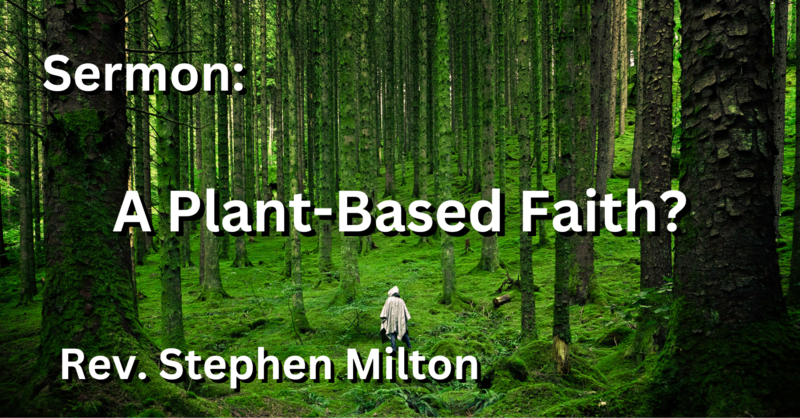 Today’s scripture reading is strange. Jesus is in Jerusalem, in the last days of his life. He wants to start a religious revolution within Judaism, but the temple system is in the way. Jesus is frustrated that the Jewish faith in God has evolved into a big, organized religion. There’s a massive temple in Jerusalem that has hundreds of priests. Money flows in to arrange for animal sacrifices for God. But where is the compassion for one’s fellow human being? Where is the faith in God, and a renewed humanity? Jesus doesn’t find it at the temple. So, he has his one and only temper tantrum. He flips the tables and declares that the temple has been defiled. This is not the faith of my Father, he declares.

Just before he has this outburst, he has come across a fig tree. It is March or April, so there’s no reason for it to have any figs yet, it is out of season. Nonetheless, Jesus expects it to have some fruit for him. It doesn’t give him any, so he curses the tree. No one will eat from you again, he says.

This episode is curious because Jesus seems to be asking the impossible, and then gets mad at this poor tree for being unable to deliver. The theologian Marcus Borg has suggested that the interaction with the tree is supposed to be understood metaphorically*. The tree represents the Jewish faith in Christ’s time. It has become barren, perpetually out of season. It has lost its way. What’s worse, when God’s chosen one arrives, the temple authorities do not recognize who Jesus is. So, Jesus curses the temple system, and predicts its downfall.

So, the fig tree stands for the organized religion of its day, barren and unfruitful. Like the temple system, the fig tree fails to acknowledge who Jesus is, sent by God. In Mark’s gospel, Jesus walks on water, multiplies loaves and fishes, calms the storm, causes the waves to become still. Even the sun goes dark when Jesus is crucified. (Mark 15:33) In Mark’s gospel, nature reacts to Jesus’ calls. But not this fig tree. It refuses to bear fruit for Jesus when He, its maker, asks. And for that, it is cursed.

To our modern ears, this story is absurd. How can a tree react to a human command of any kind, much less when it is out of season? In fact, our assumption that plants are incapable of consciousness makes this whole story impossible. If a tree can’t suddenly bear fruit, doesn’t that mean that the temple system cannot suddenly change, either? That would mean that comparing this tree to the temple system gets the religious authorities off the hook. They can’t change, and neither can this tree. But that is clearly not the point of this story. The only way this little episode makes any sense is that if the tree could respond to Christ.

This suggests that to people in 1st century Palestine, plants had some sort of consciousness. Only then can this story serve as a symbol of the problem with the Jewish faith. But conscious plants are impossible – aren’t they?  As modern people, we have an ambivalent relationship with plants. Most of our food comes from plants, directly and indirectly. Even the most dedicated meat eater consumes vegetables. All the cows, pigs, and chickens which we eat are fed plants as they mature. 38% of the Earth’s surface is now dedicated to growing crops and grasses for humans and for the animals we eat.[1] Plants are key to how we feed ourselves, and more and more of the Earth’s surface is dedicated to growing plants for our diet.

It wasn’t always this way – for most of human history, most plants were wild, not cultivated. Our species evolved in a world filled with plants which we had not planted. Trees, bushes, and vines which were just doing their own thing. Humans grew up surrounded by plants, and that appears to have made a lasting impression.

When patients emerge from surgery, it matters what kind of room they get.

If they are placed in a room with a window that faces a tree, they will recover faster than if are in a windowless room. Patients who see trees as they recover also require less painkillers, and lower doses. [2]

This research has led to the creation of gardens on the grounds of new hospitals. They significantly reduce stress and the need for painkillers. They are also used as often by staff as patients.

This may sound a bit woo-woo, so here’s a more concrete example.

This is a picture of Toronto as seen from the air. We have a lot of trees – 11.5 million[4]. About one-third of the city is covered by tree canopies. Now, let’s add a map of average household income in the city.[5]

As you can see, if you want to find where wealthy people live, look for trees. The wealthiest neighbourhoods, like Lawrence Park, have the most trees. There are no wealthy neighbourhoods in the part of the city that lack dense trees.

There is actually just one exception: down by the water where the condos are: people have chosen to be close to the lake and pay for it. Otherwise, if you want to find wealthy people, look for trees The same people who own the houses in the green neighbourhoods also often like to spend time at cottages, another place where wealth is measured in greenery.

If you follow City Council meetings, one of the odd aspects of Toronto’s system is how much time city councillors spend arguing about trees. The city’s bylaws state all trees 30 centimeters in diameter or larger are protected from being cut down on private property. Trees on public property are also protected.[6] To cut down a tree requires paperwork, an appearance before the local community council, and Toronto city council. In the past year, City Council has debated 29 tree removals. On March 9th, council debated the fate of one backyard spruce tree for 44 minutes. [7] I am not suggesting this is the most efficient way for city council to spend its time, but it does speak to our love of trees.   Plants and trees have an emotional hold on us that doesn’t make much sense rationally but is real just the same. We care about plants, we’ll pay big money to be near them, and they can even help us heal. But does that mean they care or are even aware of us? Modern society operates on the assumption that trees are just dumb biological machines that grow according to their programming. This is why we can clear cut forests – we don’t think we are hurting anything since trees are not intelligent, and do not have feelings.

That perspective has been questioned lately. In his best seller, The Hidden Life of Trees, German forestry expert, Peter Wohlleben tells a remarkable story of trees and giraffes in Africa. Giraffes like to munch on the leaves of acacia trees. The trees don’t like this at all. Scientists have found that as a giraffe starts eating leaves on one tree, chemical signals are sent through the air to neighbouring trees of the same species. In reaction to this alarm, the trees inject chemicals into their leaves that change how they taste. When the giraffe ambles over to munch on the second and third tree, she finds that the leaves are bitter, and soon gives up.[8]

Some of the recent scientific work in this area has been relying on work done by none other than Charles Darwin, the father of evolutionary theory. Darwin was convinced that plants have intelligence and wrote several books about it. In popular culture, when we think of smart trees, we imagine Ents from Lord of the Rings, or the talking trees in the Wizard of Oz. Trees obviously don’t act like that in real life. But Darwin argued that to find the intelligence of trees, you need to look below the surface, to the root system. Trees get water and nutrients from the ground. Their roots are constantly seeking out moisture and minerals.[9] But to find them, roots need to make decisions – should I grow around this rock, or go in a different direction? Random decision making could be fatal, so trees have developed a kind of root intelligence that enables them to survive and communicate with each other.

Darwin’s pioneering work has been given a boost in recent decades through the discoveries of Canadian scientist Suzanne Simard of UBC. She has revolutionized our understanding of trees by showing that they communicate with each other through their root systems.

They live in a symbiotic relationship with fungal networks, trading energy, sugars, minerals, and information. She has proven that trees that are struggling to survive can be saved by nearby mother trees which send sugars and other nutrients through underground networks. [10]

This changes the way we humans can understand even something as simple as a walk in the woods. To know that the trees above us are also below us, their roots entwined in a communication system, changes what it means to walk among them. Instead of walking past trees, we are really walking within them. We don’t need to get sentimental about this – we really are walking inside of beings which are aware of their own existence and make decisions about it. And we do appreciate their presence.

If you doubt this, consider this scenario. Imagine the hue and cry if someone were to suggest cutting down all the trees in your neighbourhood. Imagine a logging company being given a contract to clear cut Mount Pleasant cemetery, or High Park. We know in our gut that would be wrong. We know subconsciously the value of the trees around us, even if consciously we do not understand much about them. Deep knowledge matters, too.

When the Gospel of Mark wants to make a point about the corruption of the temple system, it does it with a story about Jesus and a tree. That story worked for his readers because they believed that trees were conscious. That’s an idea we are just starting to catch up to. That fig tree was believed to have enough awareness that faced with Christ, the cosmic life giver, it could have grown a fig for him. But it chose not to, and for that reason it was cursed.

When the disciples notice that the tree has withered, they are amazed that Jesus has the power to do this. Jesus responds by saying that if you have a truly selfless faith, you can do greater acts than this. With true faith, you could throw a mountain into the sea.

Our faith’s creation story tells us that humanity’s troubles began when we stole a fruit from a forbidden tree. Right from the beginning, our fate has been intertwined with trees. Read ecologically, that story tells us that we can live in God’s Garden, but not every tree is ours to use and control. Human existence in nature was meant to include limits on how much we could alter nature.[11] Christ tells his disciples that true faith allows us to see deeper into how reality works and gives us the ability to change what seems unchangeable.

We already know how to move mountains with our machines. Now, it is time to cultivate a change of mind, where our latent love of plants restores forests, creates green even in the poorest neighborhoods, and cleans the air. Let us remove the curse we have laid on trees so we may enjoy a renewed garden, fit for all species.