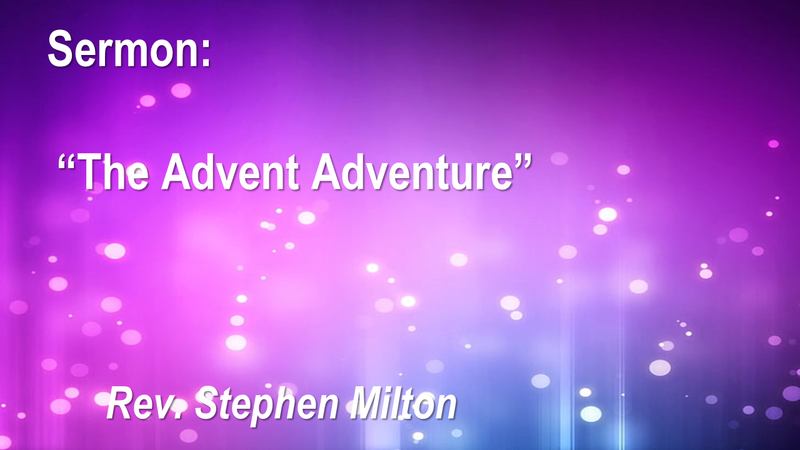 The scripture reading for this first Sunday of Advent comes from the prophecy of Isaiah. It contains those famous lines that nations won’t study war no more, and that swords will be beaten into ploughshares. For the people who first heard this prophecy, it must have sounded utterly preposterous. Isaiah was writing at a time of conflict and danger. Israel had split into two nations, the north and the south, Israel and Judea. It was surrounded by hungry empires – the Assyrians to the north and the Babylonians to the east, in what is now Iraq. Empires are like sharks, they have to keep moving and eating to stay alive. Isaiah could see very clearly that Judea was likely to be attacked and Jerusalem besieged. The Gentile nations were coming, and they were bringing their war machines with them. This was not going to end well.

And that’s why today’s scripture passage was so audacious. It appears at the beginning of the second chapter of Isaiah’s prophecy. Even though he can see such dark clouds on the horizon, he offers this vision of an alternate future. One where the nations come to Jerusalem, not to wage war, but to learn how-to live-in peace. They will train for war no more, they will turn their swords into ploughs. God will arbitrate their differences, and a worldwide peace will be the result. It is an inspiring, far-fetched, glowing vision of a world that could work – a world that was the opposite of what actually happened.

When Christians started to write down the story of Christ’s life, they leaned heavily on Isaiah’s prophecy. In it they found passages describing a messiah who would have to suffer before he could triumph. They found references to the birth of a child, whose name would be Emmanuel, God with us. Some have called Isaiah the 5th gospel. But one of its many contributions to the Christian faith has been this sense that Christ calls us together to learn the ways of peace.

That desire for peace, among all peoples, no matter how different from each other, is one of the great gifts of the Christmas season. Over the next month, people all over the city will be getting together in a way that is different from the rest of the year. Christmas is when neighbours invite each other over for some eggnog and nibblies, whether it is on your block, or in your condo in the activity room. People who rarely do more than nod to each other on the street or the elevator get a chance to talk to each other. It is also the season of office Christmas parties, something that may be possible this year after a few years’ covid hiatus. Office Christmas parties are unlike most office gatherings. Everyone is invited, from the caretakers to the CEOs. It is often the only time of year that people from every department get together. This may be why romances have been known to start here, since strangers get to meet, sometimes for the first time. A British study found that over half of couples who met at Christmas parties ended up in a long term relationship. [1]

But what makes all these gatherings unique is that at Christmas time, we expect people to get along better than they do the rest of the year. We expect these parties, and family Christmas dinners to be festive, to be joyful, to be a good time. We talk of the Christmas spirit – that sense of goodwill and cheer that we hear about in our Christmas carols. We expect people to set aside their differences, and avoid talking about office politics for the duration of the party. This is a chance to see each other as people first, neighbours and workers second. Christmas, even for non-Christians, is a time when that glow of peace and harmony that Isaiah describes should be ignited among all of us, even if just for the duration of a party or Christmas dinner.

That expectation of a joyful time when differences will be set aside can also make Christmas a difficult time. Family Christmas dinners are held with the hope of a lovely evening, where everyone gets along. But when families gather, so do their pasts, and all the unresolved grievances that people carry with them. We all bring our inner child to a

Christmas dinner with the family, and parents can be heard instructing 40-year old’s as though they were 12 again. The expectation of peace and joy can be hard to live up to in practice. Hoping for peace and joy and actually, experiencing it can be two very different experiences. For Christians, one of the reasons we gather, bringing gifts and well wishes is that we are all in our way re-enacting the night Jesus was born. There are two accounts in the gospels of Jesus’ birth. In Luke, the shepherds visit the stable at the back of the inn. In Matthew, the Magi arrive, probably later, bearing gifts.

In Christmas cards, we see these visitors joined by the animals in the stable, usually a donkey and an ox. This imagery goes way back to the earliest images of the nativity.   Nativity Here’s the first known image of the stable, carved in the 300s. No human visitors for Jesus, but there is a donkey and an ox [2].

We owe this sense of gathering to the prophecy of Isaiah. He imagined the nations gathering around God in Jerusalem to learn the ways of peace. But he also provided a detail that made it into the Christmas cards and Christmas pageants. At the beginning of his prophecy, he states that Israel has lost its way. It has forgotten that God is its true leader.

Then he says, quote: The ox knows its master, the donkey its owner’s manger, but Israel does not know, my people do not understand.” (Isaiah 1:3)

When Luke’s gospel says that baby Jesus was placed in a manger, a feeding trough, he is making a reference to Isaiah’s prophecy. The presence of the donkey and the ox in all those stable scenes is also a reference back to Isaiah. But the animals are not meant to be taken literally. In our time, we often use animals as symbols. We still see this in sports – if we talk about how the Ticats or the Blue Jays are doing, we know we are talking about sports teams. For the Jews and Christians, the donkey and ox were also symbolic. The ox was a ritually clean animal, useful in the fields, but also safe to offer as a sacrifice to God. It represented the Jewish people. Donkeys, on the other hand, were considered unclean. They represented the Gentiles, non-Jewish people.

So, when Christians imagined the night of Christ’s birth, they made a series of allusions to Isaiah’s prophecy. The donkey and the ox were placed in the stable as a symbol of this birth being for the benefit of all peoples, Jews, and Gentiles. Luke and Matthew drive the point home with whom visits Jesus. Jewish shepherds came to see the newborn Messiah. Gentile Magi came bearing gifts to the God of all, a little later. God in human form was meant to be an act of salvation and redemption for all peoples of all faiths and cultures, not just one.

In the church calendar, this is the beginning of Advent. It is a word that means “to come.” Ad means “to” and vent comes from the Latin word venire. This Latin word has entered English as meaning the beginning of something – we say the advent of democracy, or the advent of the information age. It also lies at the root of our word “adventure” – a trip we go on, expecting something good to come of it. And we see that in the way we tell the Christmas story. It is not just us waiting for the Messiah to arrive. People also go out of our way to meet the Christ child. The shepherds and Magi come. They were told by angels to go see Christ. And we are still doing this, these many centuries later. We invite people to come to our Christmas parties and Christmas feasts. We sense that this wondrous event is different from an Amazon package simply arriving on our doorstep. Rather, advent implies a meeting between God, who has come, and the people who are eager to be closer to God. It is a mutual drawing together that creates the Christmas spirit.

But we know that simply coming together for dinners and Christmas parties does not in itself change the world. In fact, we often feel that these gatherings are exceptional, a departure from the normal business of life. Like a detour off the main road. It may be a charming one, but not one that we expect to last. We will get back on the main highway of life afterwards and things will return to normal. Like those soldiers in 1914 on the front in World War One on Christmas day. They dared to leave their trenches to shake hands, wish each other merry Christmas, and even play soccer for a while. But it didn’t last. The next day they were back shooting at each other. [3]

This suggests that there is something missing from our gatherings, something that isn’t strong enough to last. In today’s passage from Isaiah, the choice of words is interesting. We’re told that the nations will come to Mt Zion of their own accord. They have not been defeated. This is not subjection, but a willing visit to God. God responds not with harsh words, but with an offer to help them settle their disputes – in English the words are judge and arbitrate. God acts as a mediator, helping them reach peaceful accords.

And then something marvellous happens. They beat their swords into ploughshares. Note that it doesn’t say, the swords will be buried, or thrown away or destroyed. No, the swords will be made useful. They will be beaten into ploughshares. Instead of people being beaten in war, swords will be beaten. Turned into something not just useful, but fertile: ploughshares, the blades that loosen the soil so crops can be planted. It is a vision of world peace where all those dollars spent on tanks and missiles get turned into tools for feeding people, to end hunger and want. To make dry ground fertile for the good of all.

This change occurs because the nations choose to stream towards God. They choose to gather, to be given an opportunity to learn a better way of living with each other than they were able to achieve on their own. It is the willingness to listen and learn, that openness, which makes God’s way a reality. So, on this first Sunday of Advent, come all ye faithful, let us keep listening to God. Let us pray for a world where we will study war no more. Let us have faith that this world can be saved from violence. Let all the faithful gather together, to learn how to build a better world at home, at work, and in society. Let us have faith that with God’s help a brighter future is still – to come.