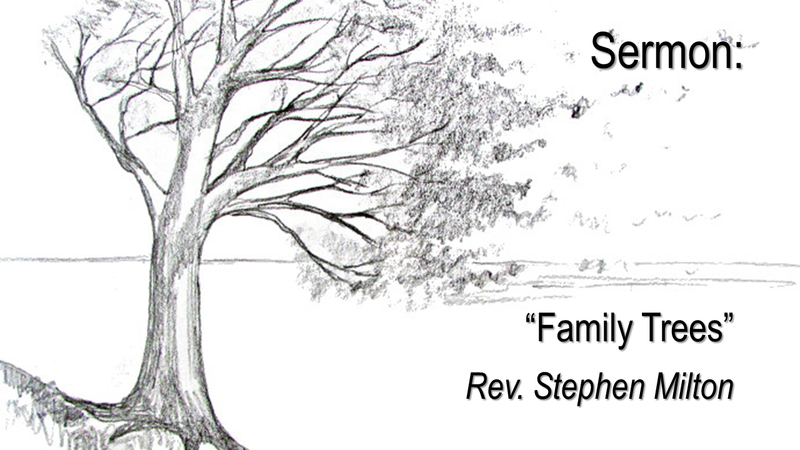 Today’s scripture reading refers to the Messiah being like a stem that grows out of the stump of Jesse. Jesse was King David’s father. God chose David to be the King of Israel. God promised to help all the kings who would be decedents of David, provided they stayed true to God. The Hebrew Scriptures tell the story of the kings that came after David, and their often-troubled relationships with God.

In the time of Isaiah’s prophecy, David’s family was imagined as a tree, a family tree. But during Isaiah’s lifetime, that tree was chopped down. The Babylonian empire invaded and destroyed Jerusalem. The rule of Davidic kings ended. The family tree of David was now just a stump.

But if you have ever hiked in the woods, you have probably seen stumps that grow new shoots. Scientists tell us that other trees can provide nutrients through their roots to the stumps so they can start to grow again. (Simard)

Isaiah doesn’t know the science, but he does know that stumps can grow new stems. And so, he predicts that the family tree of Jesse, father of king David, will grow a new stem, a person who will become the Messiah.

The gospel writers read this part of Isaiah’s prophecy and concluded that Jesus must be this new shoot from the Jesse’s tree. In both Luke and Matthew’s gospels, they provide long genealogies that establish that Christ’s foster father Joseph is related to David. So, Jesus has been born into a home led by one of David’s ancestors. Back then, they didn’t think mothers contributed to the blood line. We can disagree with that, but back then, if Jesus was related to David, they felt it had to be through Joseph. Jesus was conceived by God’s spirit, nurtured in Mary’s womb, and had a stepfather from the House of David. For the early Christians, this suggested that Isaiah’s prophecy had been fulfilled.

This may seem like a convoluted family tree, but then, family trees are often like that. You may have made one for your family at some point. They are rarely straightforward. People die, get remarried, adopt children. Sometimes people are born out of wedlock, and only added back into the family tree later. Family trees can be messy. But they help remind us that we come from somewhere. We are related to our ancestors. The family nose that keeps coming back, or genetic diseases that tumble through the generations. We are all part of a family tree.

But there is one way in which family trees do still matter, and that’s when it comes to wealth. In this city, the wealthiest neighbourhoods are the ones where the families have been living in the country for multiple generations. The area around this church is very wealthy. According to the Census, half of the residents here come from families which have been in Canada for 3 or more generations.[1] That’s much higher than most places in the city. In Thorncliffe Park, just 7 percent of people have been here for 3 or more generations. Citywide, the average is 21%.[2]  Being here for 100 years or more means that families have had time to buy and sell land, send their kids to school, and then better schools, and slowly increase their wealth. This helps explain why the average income in this neighbourhood is twice the city average.[3]

But simply being here the longest does not in itself guarantee wealth. Black Canadians have been here since the 1600s,[4] but they have not enjoyed the same kind of wealth accumulation. Slavery held them back for 200 years. After slavery ended in 1834, poorly funded segregated schools were created for Black children. Universities in Ontario refused to admit Black students to medical and nursing schools. [5]While white families used their money to fund the education of doctors and lawyers, Black people were restricted to a narrow range of jobs and education. Getting here long ago is no guarantee of success.

Those restrictions make a difference to families over the long term. A recent survey of parents in Ontario found that 40 percent of them had helped their adult children with their down payment for a house. The average gifted amount was $70,000. One third of those parents were also helping their children with their monthly mortgage.[6] That kind of gift is only possible if you have the money. Those gifts are not possible for most people of colour in this city. Most whites live in a family-owned home. But among Blacks and immigrants from the Middle East and Latin America, less than half do.[7] Most don’t have the money for a down payment for themselves, much less their kids.   Who your parents are can spell the difference between living in a house or renting for the rest of your life. It can decide whether your money grows through home ownership, or whether your wealth shrinks as rents go up year after year. Family trees matter, even when they carry injustices in their roots.

Perhaps that’s why today’s prophecy presents us with such a strange family tree. In Isaiah’s prophecy, it imagines a stem arising out of a stump. God is taking a broken family tree and making a new start with Jesus. As though what humanity needs is an escape from normal family trees. Isaiah tells us that this new family tree will have a Messiah who will not see the world as humans usually do. He will look beyond the surface appearance of people and see deeply into who they really are. And there is a promise that this spiritual insight will benefit one group in particular:

with righteousness he will judge the needy, with justice he will give decisions for the poor of the earth. (Isaiah 11:4)

This messiah will have a special mission to ensure that justice is provided for those who have the least wealth. And then comes a promise which is as outlandish as it is unforgettable: That the wolf will live with the lamb. Predators and prey will coexist peacefully, cows and bears, calves, and lions. Enmity will cease, equality and peace will reign. This is not an ecological prophecy. Last week I explained that in the Bible, nations are often represented as animals, the same way we use animal names for sports teams. So, in Isaiah’s prophecy, predatory nations – wolves, lions, and bears – are predicted to one day get along with weaker nations, like the Israelites. Predator and prey, lion, and lamb, will lie next to each other, safely.[8]   That is the vision which we celebrate at Christmas. When the angels appear before the shepherds on the night Jesus is born, they sing words that sound straight out of Isaiah’s prophecy:

Glory to God in the highest, and on earth peace, good will toward all men. (Luke 2:14, King James translation)

This Messiah comes with a message of peace. He comes to engender goodwill among all of humanity. He comes to help the poor, the sick, the disabled, anyone who is oppressed and held back from flourishing. This is not being nice, or a pleasant moral gesture. Instead, it is how we assess the health of an entire society. How does it treat those who are weakest? Will you be fed, will you be housed, will you be welcomed as a wonderful child of God?

The Christmas spirit calls us to bring peace and safety to all people in our society. Canadians have been trying to move in this direction. Many of the impediments of the past are gone – slavery has ended, people are not turned away from the border based on their race, health care is free. All good.

But housing has become a new form of discrimination against people of colour. Most Blacks, and people from the Middle East and Latin America do not own their home. That means they need to rent. But rentals and wages are like two siblings who don’t get along. For the poorer half of the city, real wages have been flatlined for decades. But rents keep going up. A two-bedroom apartment costs 27% more this year than it did last year.[9] New rental units keep coming onto the market, but most of them are condos.[10] They are rented 45% above the average rent.[11] That means only wealthy people can rent these condos. [12] The condo owners often hope to flip them to make a profit. All perfectly legal. This has led to a situation where there are 81,000[13] people waiting for the City’s subsidized housing units. Meanwhile, it is estimated there are 92,000 empty dwellings in the city[14]. This city needs meat and potatoes, but what we get is truffles and champagne. Our current system can make enough housing for everyone, but not enough housing that people can afford.

This housing crisis is a new form of oppression against people of colour. It isn’t designed to do that. Investors just want to make a good return by renting or flipping their properties. They are not trying to oppress anyone. But the effect of this system is to hold back people of colour from generating equity. Most of them do not have parents who can give them a down payment, or a job that can buy them a million-dollar home. So, they get stuck. Many White families can use their wealth to help their kids with school and buying homes. Most people of colour lack the same resources, so they fall behind. As Christians who sing of peace on earth and good will among all men, we need to recognize that we have collectively created a new way to hurt people who were already behind. It’s not slavery or beatings, but it is keeping people in poverty while others get wealthy.

The provincial government has tabled legislation that will give developers more freedom to build rental units and homes. Experts, including the City of Toronto’s staff, have said that the plan will not help the bottom half of Toronto income earners. Developers like to make units and homes for people who can pay high prices. Yet, the real housing crisis is among people who cannot afford high priced homes and rentals. Giving more breaks to the industry that created the problem seems doomed to failure.

As Christians, we look forward to celebrating the birth of a child who was born in a stable during a housing shortage.  Our faith tells us that it should not matter whether someone has lived in Toronto for 1 year or 100, we all deserve to have a safe, affordable place to live. If our rules and the economy get in the way, then we are called to change them. Perhaps it is time that the lions and lambs listened to each other and tried to create a system that works for both of them. Isaiah foresees a time when God’s love and understanding will fill the earth, like waters that cover the sea. Let us do our part to help create that world, one where everyone will feel at home.