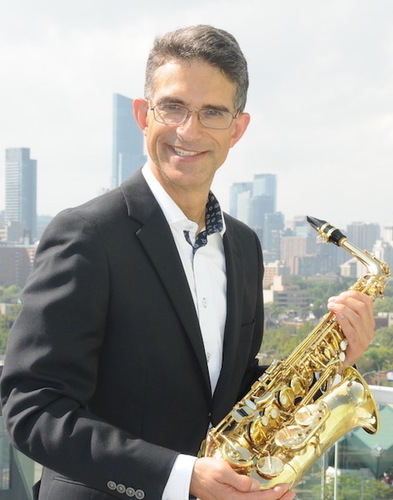 Daniel Rubinoff has performed as a soloist and chamber musician in France, Canada and the United States. His discography includes The Old Castle, Daniel Rubinoff Plays the Music of Srul Glick, The Canada Song, The Dance of the Blessed Spirits, and Daniel Rubinoff Plays Denis Bédard. His recordings are broadcast on CBC and have received favourable reviews on CBC Radio and in the American Record Guide.

He has appeared on the cover of the International Saxophone Journal with a feature article on his career. He won the ARCT Gold Medal from the Royal Conservatory of Music for the highest score in the orchestral instrument category. Rubinoff is a former Adjunct Professor of Saxophone at York University in Toronto. He has performed numerous saxophone recitals with some of Canada’s finest musicians: Sax ' n Ivory, with concert pianist Gloria Saarinen; The Dance of the Blessed Spirits, with organist Chris Dawes; Classical Meets Jazz, with pianist David Braid; SaxAccord, with accordionist Joe Macerollo; and Music Old And New, with harpsichordist Paul Jenkins of the Toronto Consort.

Daniel has performed recitals for the World Saxophone Congress (Quebec), Octagon Recital Series (Nova Scotia), BC Touring Council (British Columbia), Port Ludlow Community Concerts (Washington), and Colours of Music (Ontario). Rubinoff’s original compositions have been performed by many of Canada’s leading musicians and ensembles, including the Elmer Iseler Singers, members of the Tafelmusik Chamber Choir, Hilario Duran and Joe Macerollo. Rubinoff currently serves as Music Director at Lawrence Park Community Church, where he is developing innovative approaches to choral composition and performance. Additionally, he has led performances of Vivaldi’s Gloria for the Canadian Amateur Musicians of Canada (CAMMAC) and other community groups. Rubinoff is a frequent music festival festival adjudicator with expertise in choral, band, orchestra and chamber music.

Daniel is an Artist-Representative for the Selmer Saxophone Company of America, and has adjudicated wind examinations for the University of Toronto’s Faculty of Music. He is also the recipient of a Social Sciences and Humanities Research Council of Canada Fellowship in support of his work in saxophone composition and research. He holds a PhD in Musicology from York University where he studied Dalcroze Eurhythmics.