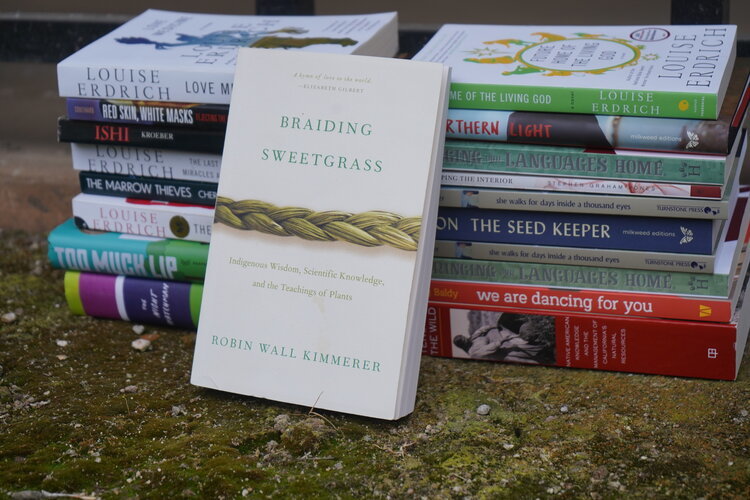 Here are some suggested Indigenous books for you to read this summer. If you have any others you would like to add, please contact Judi at judi@lawrenceparkchurch.ca

Katherena Vermette, The Break: When Stella, a young Métis mother, looks out her window one eventing and spots someone in trouble on the Break - a barren field on an isolated strip of land outside her house - she calls the police to alert them to a possible crime.

Katherena Vermette , The Strangers. The sequel to her bestselling debut “The Break”, The Strangers brings readers into the dynamic world of the Stranger family, the strength of their bond, the shared pain in their past, and the light that beckons from the horizon.

Richard Wagamese, Indian Horse: The novel centres on Aaul Indian Horse, a First Nations boy from Ontario who survives the residential school system and becomes a talented ice hockey player, only for his past traumas to resurface in his adulthood.

Joshua Whitehead, Jonny Appleseed: Off the reserve and trying to live, Jonny becomes a cybersex worker. Jonny has one week before he must return to the “rez”, and his former life, to attend the funeral of his stepfather.

Michelle Good , Five Little Indians: Follow the stories of five children taken from their families and sent to a remote, church-run residential school. They are barely adults when they are finally released onto the streets of Vancouver, totally unprepared for life.

Cherie Dimaline, Empire of the Wild:   Joan has been searching for her missing husband, Victor, for nearly a year—ever since that terrible night they’d had their first serious argument hours before he mysteriously vanished. Her Métis family has lived in their tightly knit rural community for generations, but no one keeps the old ways . . . until they have to. That moment has arrived for Joan.

Richard Wagamese, Starlight: A beautifully poetic account of a man’s relationship with the land)

Joseph Boyden, The Orenda: a controversial look at the early history of French-English-Indigenous relations shortly after contact. Contains graphic violence.

Thomas King, Indians on Vacation: a meditation on being Indigenous, trauma, travelling, and married life. Sweet and yet very wise.

Danielle Daniel, Daughters of the Deer: In this haunting, groundbreaking, historical novel, Danielle Daniel imagines the lives of her ancestors in the Algonquin territories of the 1600s, a story inspired by her family link to a girl murdered near Trois-Rivières in the early days of French settlement.

Tracey Lindberg, Birdie: Cree folklore is woven into this absorbing coming of age story about a young woman who suffered sexual abuse as a child. When she falls into a dream state, three very different women keep vigil while her dreams lead her to "find the space where her memory could live peaceably with her body."

Cherie Dimaline, The Marrow Thieves: In a world on the brink of collapse from environmental degradation, madness takes hold as the ability to dream falls away -- except the Indigenous peoples of North America. And the key is in bone marrow. The book follows Frenchie and his friends as they journey northwards, trying to stay hidden from those who would steal the very marrow from their bones.

Cherie Dimaline, Hunting by the Stars: (Sequel to Marrow Thieves): Years ago, when plagues and natural disasters killed millions of people, much of the world stopped dreaming. Without dreams, people are haunted, sick, mad, unable to rebuild. The government soon finds that the Indigenous people of North America have retained their dreams, an ability rumored to be housed in the very marrow of their bones. Soon, residential schools pop up—or are re-opened—across the land to bring in the dreamers and harvest their dreams.

Richard Wagamese, Embers: In this carefully curated selection of everyday reflections, Richard Wagamese finds lessons in both the mundane and sublime as he muses on the universe, drawing inspiration from working in the bush--sawing and cutting and stacking wood for winter as well as the smudge ceremony to bring him closer to the Creator.

Richard Wagamese "One Drum; Stories and ceremonies for a planet": One Drum draws from the foundational teachings of Ojibway tradition, the Grandfather Teachings. Focusing specifically on the lessons of humility, respect and courage, the volume contains simple ceremonies that anyone anywhere can do, alone or in a group, to foster harmony and connection. Wagamese believed that there is a shaman in each of us, and we are all teachers and in the world of the spirit there is no right way or wrong way.

Tanya Talaga, Seven Fallen Feathers:  Over the span of eleven years, seven Indigenous high school students died in Thunder Bay, Ontario. They were hundreds of kilometres away from their families, forced to leave home because there was no adequate high school on their reserves. Five were found dead in the rivers surrounding Lake Superior, below a sacred Indigenous site. Tanya Talaga delves into the history of this northern city that has come to manifest Canada’s long struggle with human rights violations against Indigenous communities.

Tanya Talaga, All Our Relations (Massey Lecture): Tanya Talaga turns her attention to the rising rates of youth suicide in Indigenous communities around the world, and traces connections to colonial practices of separating peoples from land and a lack of basic resources that lead to poor health outcomes. Talaga also highlights traditions of resistance among Indigenous Nations that might lead the way to a more just and equitable future.

Tanya Tagaq, Split Tooth. An enthralling, devastating coming of age story set in Nunavut in the 1970s. The audiobook is narrated by the author, an internationally acclaimed Inuit throat singer, who punctuates the story with her unearthly music.

Thomas King, The Inconvenient Indian: King reviews the history of how Indigenous people have been seen – and not seen – by settler culture. He does this with wit and a wry sense of humour.

Denise Bolduc et al, eds, Indigenous Toronto: Stories that Carry This Place: collection of essays and reminiscences about Indigenous life in Toronto over the years.

Robin Wall Kimmerer, Braiding Sweetgrass: an Indigenous scientist looks at nature from the perspective of both Western science and her Indigenous culture.

Bob Joseph, 21 Things You May Not Know About the Indian Act: A short, useful primer on the legislation that defines who is and is not a Status Indian in Canada, and all the troubles it has created.

Jesse Thistle, From the Ashes: Thistle’s story is an important one, and the addition of his Metis heritage and the inner turmoil it causes him forces readers to look at his problems through a very distinct lense.