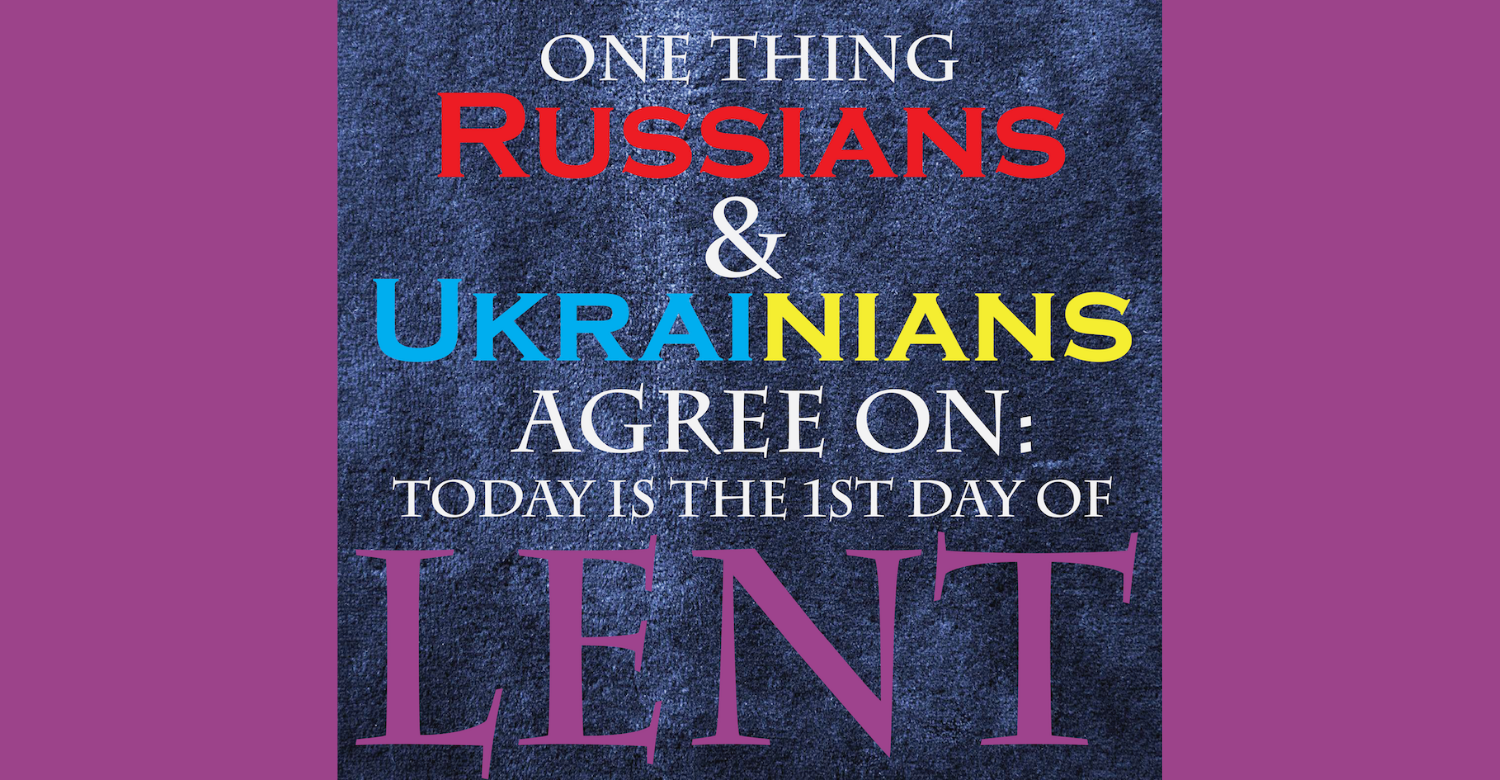 In Ukraine and Russia, Lent did not begin last week, it begins today. This is called Clean Monday, the start of Lent for Christians who are members of the Eastern Orthodox church. This may be surprising, since for Catholic and Protestant churches, Lent started last week on Ash Wednesday. Why are there two start dates for Lent?

The short answer is that the Western and Eastern churches calculate the date for Easter Sunday differently. This year, Western churches will be proclaiming that Jesus is risen on Sunday, April 17th. Among the Eastern Orthodox, Easter will be on April 24th this year. To calculate the start of Lent, they count backwards 40 days from two days before Palm Sunday, to arrive at today. Unlike the Western churches, they believe that Sundays count as part of Lent.

This begs the question, why does Easter differ between the two major branches of Christianity? The Eastern approach is indebted to the original way Easter was calculated by early Christians. In the year 325, a major council of all Christians decided that Easter Sunday should fall on the first Sunday after the full moon after the spring equinox, and after Jewish Passover. At that time, Greek Christians correctly determined that the equinox took place on March 21st. But the Roman Christians thought it was on the 25th of March. So, from early on there were disagreements about when Easter should take place, and hence when Lent would begin. In our time, the two churches still use different methods to calculate Easter’s date (we use the Gregorian calendar, they use the Julian), so Easter and the start of Lent rarely coincide.

Lent played a part in why the Western and Eastern churches split. The Roman Catholics in the Middle Ages wanted all of Christendom to play by the same rules – one date for Easter, one date for Lent. But the Eastern churches celebrated Lent differently. The West didn’t count Sundays as part of the 40 days, but the East did. In the West, choirs could not sing hallelujahs throughout Lent, but in the East they could. These and other theological differences led to a formal split between the two churches, which started in a particularly nasty meeting in 1054 when Papal representatives excommunicated the Eastern churches. In reality, it took a couple of centuries for the split to solidify.Today in the Eastern Orthodox church, Lent is a time of fasting from meat and dairy products, and for introspection.Traditionally, people fast all day on the first day of Lent, Clean Monday, breaking their fast only in the evening. Some will fast for three days. One wonders how many Ukrainians will take on this fast today simply because it will be hard to find food in the besieged cities. Ironically, yesterday in the Eastern calendar was “Forgiveness Sunday.” One wonders what was said in the subways where Ukrainians are sheltering from Russian bombs, and what was being said in the Russian churches. Russians and Ukrainians may agree that today is the start of Lent, but let us pray they find a way towards a just peace and the end of all violence long before this Lent ends.